1 year ago, James Price was hit and killed: vigil tonight

I received a text from his sister this morning saying at 7pm there will be a vigil. I cannot make it unfortunately, but wanted to make sure others knew about it as well.

Will this be on Penn Avenue? (What is the nearest cross street?) Elsewhere?

They’ve been maintaining the ghost bike where he was hit — I stopped by there the other day. So I would assume it would be there.

Glad this is happening…I will go.
Yeah, they have been refreshing things seasonally. I think it may need a bit of paint soon, though.

@ian the bike is on Penn Ave at the entrance to “The Factory” complex, which includes the co-op. Nearest cross street is the dreaded S. Braddock.

I’ll try to be there.

BTW, are we doing anything (ghost bike, other) for the girl killed in Sewickly? or the guy on Streets Run road?

Will try to get there.

Any particular place to get together from downtown or jail trail and to ride there?

To be honest, given my work schedule, I will likely bus it out the East Busway to Homewood Station. Either P1 or P2 from downtown; P3, 67, 69 or 71C from Oakland. The first three get you down the busway. The last three get you out Penn.

I am going to try to get there. I’ll start around 18:20-18:30 from Jail trail Parking lot and using 2-nd-Saline-Boundary-Neville-Elltheworth-Penn. I am going to be in my PMTCC Short Sleeve Cycling Jersey. You are welcome to join.

I got video of the event. Many family did, too. I talked with a photographer taking stills who plans to burn them to a CD for family members. When I get the video processed, I will post a link here.

From time to time, I pointed the camera at traffic. I was standing on the curb. That is not a parking lane, it’s a driving lane. Note the extremely close passes by a couple of cars at 10:50 in the video. A little later on (14:00), a white SUV (ZDH-4232) comes flying off of South Braddock and goes screaming down Penn, passing a car on the right and the crowd by mere feet, on its way to 45 mph or better. This sort of thing happens all the time, and it is this that killed James Price.

The vigil was a solemn reminder that when you hit a cyclist, it impacts others in their life.

Thanks to everyone who was able to make this. I’m sorry I was not able to attend. Thanks for taking video, Stu.

I watched the video and listened to the conversation about the young woman killed on University Boulevard. The comment was made that the road was built for automobiles and it is not possible to ride safely there. I agree with that. What gets me is that the road is part of Pennsylvania Bicycle Route A, a state-sanctioned bicycle route from the West Virginia border to Erie. When you read about these routes online, it says the routes were laid out by experienced bicyclists. Really ? This was either done a long time ago or they were simultaneously testing the new marijuana laws when they were surveying. I am familiar with Bicycle Route J along the Susquehanna River. It also has some very dangerous sections. Noteworthy is that you are actually taken on US322 north of Harrisburg, which is very similar to an interstate highway with a 1 foot shoulder and rumble strips on that thin shoulder! There is a you tube video taken by someone who actually rode it recently. Very scary. I would guess that this young lady was just trying to get from point A (no pun intended) to point B and wasn’t necessarily on this route because it was PA Bicycle Route A. However, I think the state needs to re-think these cross-state routes and get some truly experienced bicyclists to map out safer alternatives. While I am on my rant, I notice a number of these roads that are lousy for bicycling but have old, cracked, gravel covered, and crumbling sidewalks that nobody is using. Is it feasible than next time the road is up for re-surfacing, take out those nasty old sidewalks and use that space for bikes and peds? A project to do this sort of thing in our area would vastly improve safety in a few years time.

Thanks for the video, Stu. I’m sorry I missed the event last week.

Today I noticed that the James Price ghost bicycle is gone. Where did it go?

The property owner wanted it removed. The family was informed and NickD has the bike & decorations. I’m hoping NickD or BikePGH staff will chime in, because I think they are talking about finding away of still marking the site somehow.

At any rate, it was not vandalism…

Wasn’t the bike chained to a pole on the sidewalk, which is the public right of way? Did the property owner contact Penndot to have it removed? That’s bullshit.
The occasional noble or heroic act of some individuals is not enough to convince me that humans don’t completely suck from the lowest to the very, very top of the dogpile.

I remember Nick saying at the time that the property owners had agreed to let the bike stay as long as the family maintained it. But the property owners probably got tired of that agreement after a year. So it’s a shame.
Having the ghost bike on public property wouldn’t be better; the city would remove it eventually.

Back in 2012, we set a ghost bike on Penn Ave at The Factory

In 2013, the ghost bike was removed. Now there is a car tire sitting there. Irony! 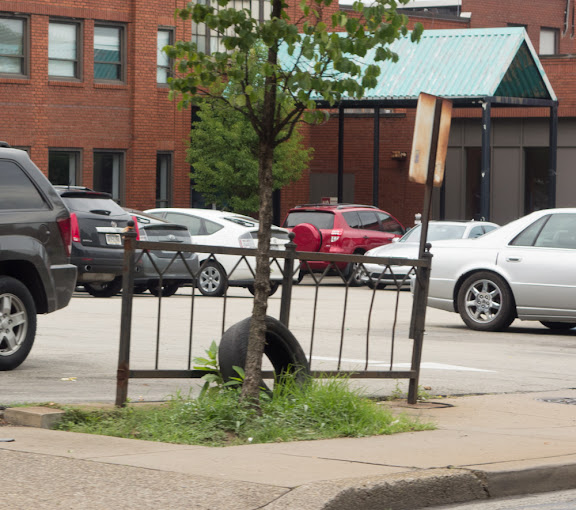 That’s so sad to see. As I remember it, the property owner didnt want the ghost bike to remain there (which the family was maintaining) so the family agreed to remove it. I guess he’s ok with weeds, tires and trash though.

I still feel very bad for the Price family, his parents are so humble and forgiving and clearly miss their son.

I am so tempted to spray paint some old piece of crap bike white and chain it to that post, and dispose of the tire, and see how long it would take before the property owner raises a stink about it. The main reason I would not do that is respect for Mr. Price’s family, who would undoubtedly take the brunt of the crap.

Is it just me, or is this how bullies get their way? They know they’re wrong, but they know more harm will be done by someone trying to make things right than by them merely admitting they’re wrong.

I think I’ll go punch my pillow and try to get some sleep.

So any thoughts on how difficult it would be to get city approval to install a bike rack at that location? We could maybe raise funds to get a bike-shaped one (like Nick had made for Banker Supply) and paint that white with a dedication plaque for Mr Price.

I’d be happy to contribute for that.

What do yinz think?

Sounds like a great idea. I’d contribute. But I’d suggest getting in touch with the family before doing anything else.

I’d definitely want the family’s OK, but would probably want to know if it’s possible (if the city will approve it and if we’d have enough support for it) before approaching them.

I know this is an old thread, but I was reading through it and read the articles about this man’s early and very avoidable death. I am saddened and also angry. I was still living in Eastern PA when this happened so never heard about this. But it pisses me off that a man can drive around like a jackass putting other’s lives in jeopardy and when he kills somebody and drives away as if nothing happens he gets 2 whole years. If I accidentally hit a squirrel I feel guilt for taking a life, this fucking thug kills a human out of his own recklessness and can drive away like nothing happened? Yet we have our own citizens doing decades behind bars for smoking a plant grown naturally on Earth and didn’t harm anybody.