Hopefully all the crap will be gone by Sunday.

Mother nature will get rid of the snow far sooner than the city will.

Will they likely be clear by 3:30 PM tomorrow? I cannot avoid Negley Ave. going from Aspinwall to Kraynick’s? Even though there are numerous stop signs, I can take Jancey St. to Stanton Ave. instead of One Wild Pl.

Reminder to start logging potholes for the city for when they do their blitz. I reported a 2 foot deep one on Smallman between 13th and 14th.

Very little ice or snow is left out there. Eliza Furnace, Hot Metal, Pocussett are all pretty clear.

@jonawebb – Thanks for the update.

There is a massive crater on inbound Smallman, between 32nd and 31st streets; it takes up nearly the whole lane. Proceed with cautin.

Too many little potholes to count. I was on a HealthyRide twice today between Federal/North and Wood/6Av. Lots of patch, too. It’s that season.

I put in the Smallman pothole request Sunday and this morning I got a reply from 311 that the pothole was filled.  My guess is that DPW wants to bang out as many of these potholes (with coldpatch, which is better than nothing) before it gets cold again.  So please please report via 311 as many as possible in the city.

proceed slowly if you take the sidelwalk along second ave between Bates and the ramp onto the trail…..big pile of glass midway.

I rode the whole way to Kraynick’s today.

No snow on Highland Park Bridge sidewalk, East Liberty Blvd. bike lanes, or Negley Ave. bike lanes. There are still patches of broken glass and other debris scattered in various places on the bridge sidewalk.

N shore trail officially closed between stadiums plus mon wharf closed. If we’re getting more rain Sunday we may get more flooding early next week.

Negley SW bound from Stanton to at least E Lib Blvd was cleaned. Construction fence still up at Hays so you still have to navigate into the motorist lane. Debris in E lib lane SE bound was cleared up. Entering a 311 for the NW lane at N Beatty. Recent construction left a lot to debris. Use caution over large gravel.

Wind is an ass kicker today.

not sure if this has been posted before.  If so, excuse the duplication.

Allegheny County has an online 311 like system.  I used it to report a ton of potholes in my neighborhood today on the county roads.

River going to peak at 24 feet so n shore trail (and lower part of point State Park) will be under water at least until late Sunday. Then expect a lot of mud/ice/crap on the trail for a while.

I don’t think this will affect the trail at all. Just like when the 7th St bridge was closed, there are two openings under the bridge on that side.

Flood receeding but will return Wednesday early am, same places downtown as Friday.

Rode the NST end to end today. Lots of mud between stadiums and by Alcoa. So heed the barricades. Don’t expect dpw to clean the mud Monday and Tuesday if it’s going to flood again Tuesday night. So most likely trail will be closed there at least until Friday.

Was going to take my bike down to the Waterfront Wednesday pre Costco shop but I assume that with all the rain plus freezing temps plus a ton more rain Tuesday that Eagle Lake will be heavily present with some ice. So maybe ride towards McKeesport that day instead of the Southside?

Some pictures from the river trails near the Point on Saturday, February 9.

Mon Wharf Switchback ramp leads you into the river. There’s a bit of driftwood on the ramp, coated in ice. (The top of the ramp is blocked by a wood sawhorse, so few are going down here) 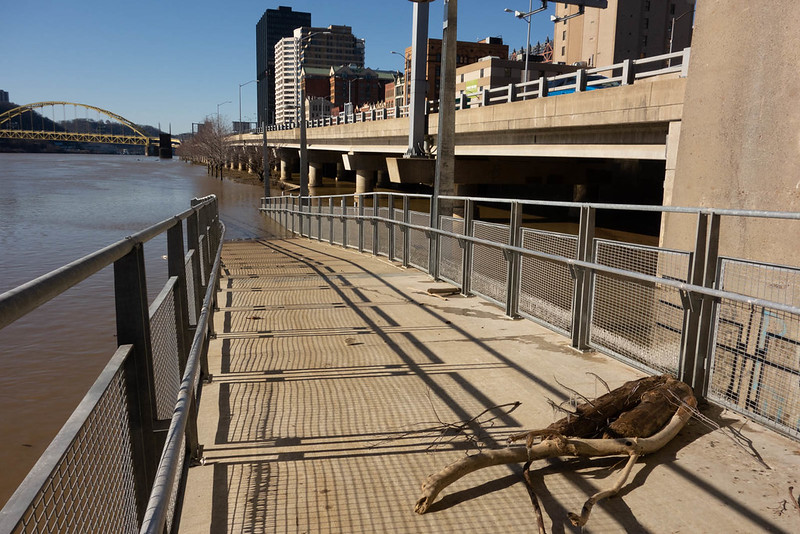 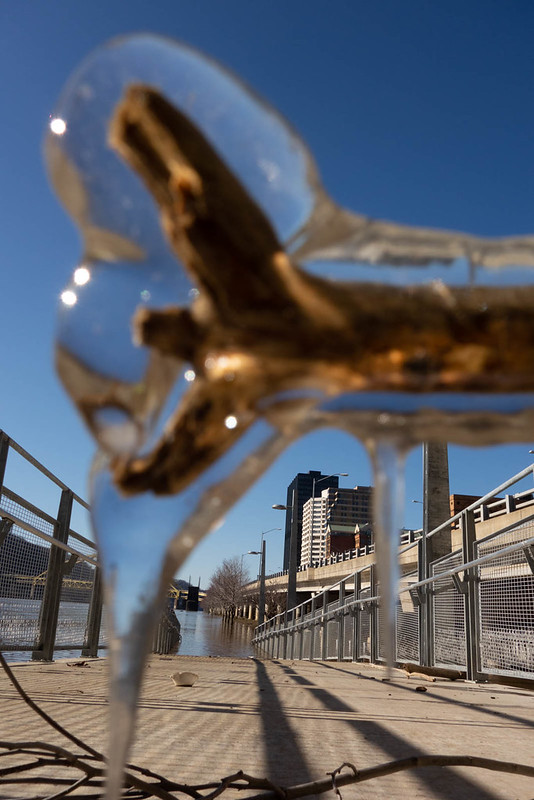 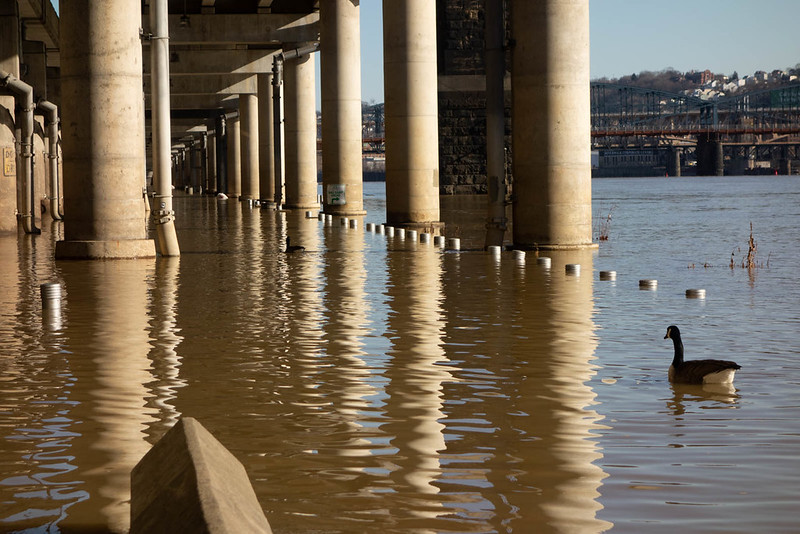 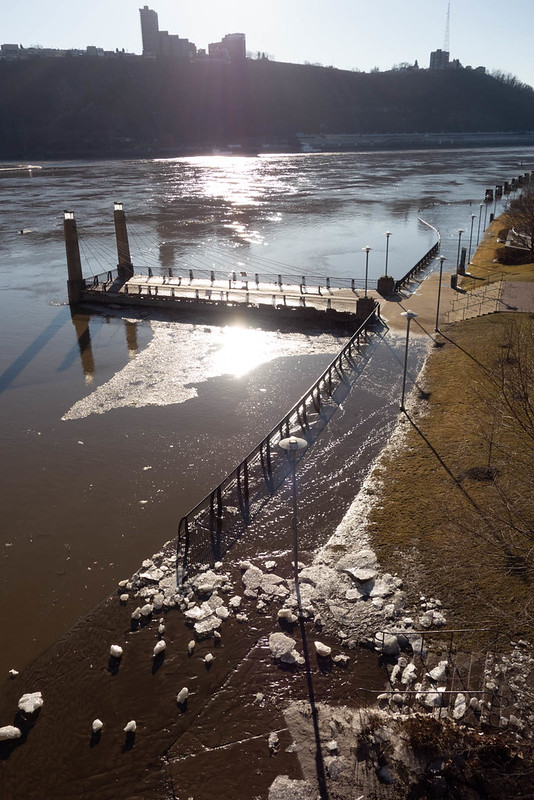 There’s a debris slide on the GAP trail about 200-300 feet from the back of Kennywood toward the Waterfront. You can still get through without a problem, but the stones are too heavy for one person to lift.  2 people can lift them.

Edit: Even though the SVTC contact form said “processing” after I clicked “Submit,” I did get a confirmation that they received my message via the form, at least when I did it on my laptop.

N shore trail from Alcoa through stadiums is mud covered. Crews were out cleaning so hopefully will be cleared today.

Also huge mound of asphalt as trail falls apart by Morgan apartments. I 311ed it. Be careful.

City was cleaning off north shore trail today. Should be clear by now.

N shore trail pretty mud free today. Lower part of point around fountain is still quite muddy. They did some cleaning yesterday so hopefully will continue tomorrow.

Around 10:50am, bike lanes on E Lib Blvd were snowy but not awful to ride on. Have 311’d. Main roads were fine at the time. Things may freeze later.

Damn, it was pretty bad out this morning.

Fresh snow over packed snow, probably some ice. Hard to navigate on studded tires since it was so chunky. Had to watch around turns since the thick packed snow made it easy to wash out.

Also, I had about an inch of snow on my backpack when I got to work. It was coming down pretty fast. I’m sure the sidewalks I shoveled before I left are covered again.

Worst conditions of the winter. Very slow on roads. Only the main roads are mostly clear. Downhill is treacherous. Fortunately the drivers are going slow, too. Pocussett Drive was plowed but is snow covered again; I think Eliza Furnace was plowed at some point but is heavy with snow; Hot Metal Bridge has heavy snow and is marked by bumps where people have walked.
Respect for the dude with a Healthy Ride bike sitting on a bench in the Eliza Furnace Trail parking lot.

Main roads are getting wet from rain, anything not cleared (most every other road) is just getting packed with wet snow. Careful yinz. No bike lanes visible and I’d recommend taking the lane or other modes of transport today (buses will definitely be delayed for a bit)

Out here in the burbs (Fox Chapel Area) everything is clear. It was like magic — around 11 am all the streets were clean. But that’s because they plow the streets out here. When I lived in Wilkinsburg they plowed very well too, so my guess is that if you can make it out of the city the rest of the ride will be generally smooth sailing.

that being said this was the heaviest snow I’ve had to deal with all season. It was a bitch to shovel.

Any news on the trails today? I’m most interested in the North shore trail or the Eliza furnace trail.

Eliza furnace trail was in good shape this morning. It appeared to have been plowed at some point yesterday.

NST ok except for millvale end which is , as Dora the explorer would say, a muddy mud pit.

Also passage under 9th St bridge closest to the river is cut off. Take the other passage. From the city end go through the sculptures at Allegheny landing and then take the Alcoa ramp

A High Wind Watch means there is the potential for a hazardous
high wind event. Sustained winds of at least 40 mph, or gusts of
58 mph or stronger may occur. Continue to monitor the latest
forecasts.

but every day is a good day to bike