I’m away in a country that hardly gets any rain at all (Jordan) and has zero bicycle infrastructure and no bikes on the street, but I’m coming back to Pgh next week.

Has anything bad happened with any of the trails with our climate change induced flash floods today? I saw pics online and it looks scary.

I decided to challenge myself and try a metric century ride today on the trails from Millvale to Buena Vista on the GAP. For the most part, things went fairly well, but I was slowly tiring the last 10-12 miles. Hands & saddle mostly, but my energy too. My longest ride had been 50 miles, which I’d done maybe a dozen times in the past.

-The trails were in good shape overall from the recent heavy rains, but there were still some debris washouts to look out for .  A stretch of the GAP in the Boston/Greenock area had taken some damage, but it looks like they had “patched” things up for the most part. It was just really rutted from all of the tracks that had dried in the mud from the storm. It wasn’t that bad.  Thanks & appreciation to all of the volunteers/workers that fix these situations as quickly as possible.

-A lot of people were out on the trails today because of the beautiful weather.

-The GAP trail from behind the McKeesport police station down towards the marina has been freshly paved & marked. The parking lot next to it has been paved too. I think they put up a new Clairton Connector sign at the top of the parking lot on a telephone pole as you head toward the marina.

-Eagle Lake is still in formation, but it’s shrinking.

-It looks like they filled maybe 2 of the “strips” from tree root/drainage damage on the trail between HMB and Sandcastle with some kind of temporary mix, so it’s more of a slight bump now.

-I saw 5 other cyclists on the Loop trail from Versailles to McKeesport. That is a record for me. The most I’d ever encountered on a ride is 1, so this blew it away by a mile.

Sidewalk reconstruction work continues on West Carson St. They are almost done with the section on the around the Duquesne Incline footbridge, and they’ve started along Gateway View Plaza. It’s unclear how far they are going to go with this work, but hopefully it goes all the way to the West End Bridge.

OK, this is a motorcycle observation but I suspect it holds true for bicycles, too. Those ubiquitous tar strips used to patch cracks in the street, are like ice in the hot sun. Riding up Perrysville Ave, easily a dozen times I felt my tires shift perceptibly any time I had to cross one of them, especially while in a curve. It was only for a few hundredths of a second at a time, but very unsettling.

Same. I frequently have to fight it coming down the moderate-speed southbound descent on Greenfield toward the bridge, where the road’s covered with that liquid patch. Horrible, dangerous stuff!

Ditto with the decorative cobble stones/bricks outside of the Morgan apartment building on the n shore trail. There’s a gap between them and I feel my front tire shift when I hit them. Disconcerting.

went riding at 630 am today on the NST. It’s miserably muggy out. Be careful today (and tomorrow). They’re also doing a 5k walk/run on the NST trail, starting at heinz field and going 1.5 miles up the trail toward millvale, and then back. So the trail will be crowded.

Rode the Butler-Freeport Trail in its entirety today. Be wary of multiple locations where wash-out has occurred. There are also areas where I’m guessing they back-filled sand and it is very loose and not compacted, so if you are rolling a narrow tire, you might get sucked (my 25’s very nearly sank me).

Otherwise it is apparent in many areas surface run-off has eroded the trail, and quite deeply is places. The good news is 95% of the trail is good to go, but just keep a sharp eye for these other areas. They are passable, just not a speed.

(*It does appear that the good folks who maintain the trail are in the process of trying to address these problems, so I don’t want to sound like I’m just complaining or anything – im sure the calamities the weather has caused have been more than expected, and they’re doing the best they can.)

The location isn’t good either. A lot of it is in a valley. Hence all the runoff.

^^Yep^^. Buffalo Creek runs alongside for the entirety, and for much of it is also beneath a hillside. So the trail seems to suffer from subsidence on the creek side – where the creek bank supporting the edge of the trail is undermined by heavy flow; but then also from surface erosion of water running off the hillside and crossing over the trail on its way to the creek. Double whammy…

Main paved trails up and down the rivers been ok since the rains/floods?

I biked past Kennywood today and the trail there was fine.

I ran the NST this morning from Millvale to the stadiums — all ok.

Moorewood between Centre to Baum is closed one way towards Baum. They raised the building on that corner and have temporary barriers across the one lane. Didn’t notice signage on how long that will last. Open heading into Shadyside, but expect heavy traffic during rush hours.

This weekend, Little Italy Days takes over Liberty Ave in Bloomfield. It’s a bear to ride through during the festival.

No one else on the planet cares, but it delights me every time I take it. The Yarrow lunar surface has been resurfaced!!!

For me, it’s a fun (and the shortest) way to get from the Boundary path to the Schenley Placenta. It basically allows one to climb 2/3rds of Joncaire up to Bouquet, avoiding most of the cobbles. It’s a tiny, very steep sprint before a bit of flat, then another short sprint up the rest of Joncaire. And it used to be hell on Earth; now it’s fresh smooth asphalt.

It makes me happy, anyways.

how have I never known about Yarrow? riding up those cobbles sucks. I usually just take the sidewalk, but that isn’t the greatest idea when there are lots of pitt students walking around.

Now I gotta go ride it!

A good bit of Perrysville Ave got blacktopped, covering up holes from lead water pipe work. Most notable from Riverview to Vinceton/Bascom.

What is the Schenley Placenta? Does it have to do with pregnancy?

Placenta=plaza. Either a typo or some sort of humor that went over my head.

Millvale riverfront Park completely closed. Looks like a tree down across the path between the boathouse and the bridge by the back channel. Doesn’t look passable. No crews out working. Evergreen right by 28 also closed. Large pole and wires down. No crews working either.

My guess is that the park won’t be open for a few days.

I think the park and the trail is now re-opened as I called Three rivers rowing and they said that you can get to the boathouse on the millvale side but he hadn’t been back on the trail to see if the tree was gone.

“how have I never known about Yarrow? riding up those cobbles sucks. I usually just take the sidewalk, but that isn’t the greatest idea when there are lots of pitt students walking around.”

When I come the Panther Hollow trail, depending on where I am heading I use the following options:
– up Yarrow, then onto the sidewalk on Joncaire to Bouquet
– cross the tracks at Panther Hollow Lake now they the fence has been cut open and take trail up through Schenley to Bartlett Playground
– go up Boundary and just over the tracks cut into CMU and walk through Scaife Hall, but only on weekdays as it is sometimes locked on weekends
– into CMU and take the path that cuts up around the Gates building and come out on Forbes, or cut up through campus
– continue up Boundary to either cut up onto Craig, or continue up to 5th

Plummer was closed at Butler St this morning. They are tearing down the building on the corner. Not clear how long that will go on.

@Dave A few months ago I decided to suggest to CMU to put runnels on the steps behind the new Tepper building down to Boundary. When I crissed tge tracks to snap a photo, to my surprise, the steps had been built with runnels! That’s what I call RI…Real Intelligence vs AI. Chwck it out. It will get one to the upper campus at Tepper.

Plummer was closed at Butler St this morning. They are tearing down the building on the corner. Not clear how long that will go on.

Sad: tstorm last Saturday took out a crapload of trees in Millvale riverfront Park
Happy: they used the cleanup as an opportunity to finally clear the trail.

Also fundraiser tonight behind the casino on the trail. It’s a tight squeeze back there.

RiverLife’s Party at the Pier is tonight and they have the usual ‘detour’ around the obstacles.

However, they go ahead and park trucks RIGHT ON THE DETOUR.

It’s quite narrow. And I assume there will be people walking to and from the building…

Very narrow, I almost got impaled by someone driving a forklift through the narrow part… then a golfcart right behind it. What the hell, people? 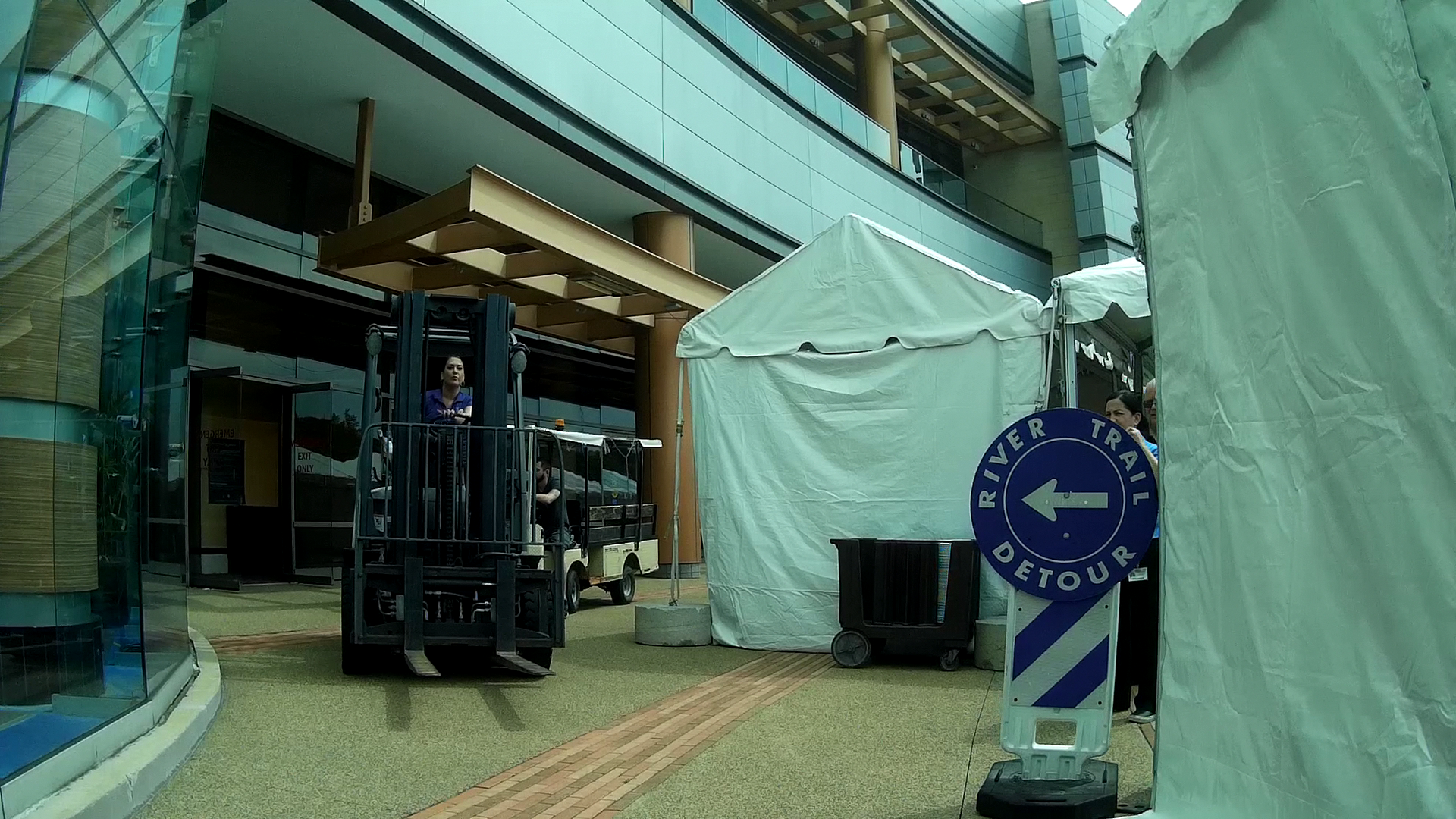 yeah, they really should have the detour go around the casino. I applaud them for trying to keep it open (a few fridays ago they were prepairing for a concert and they had the detour go all the way around the building, but ironically no one followed it since the trail was still open), but it’s too narrow.

10th street bridge to close in 2 weekends for repaving
https://triblive.com/local/pittsburgh-allegheny/10th-street-bridge-to-close-for-repaving/ 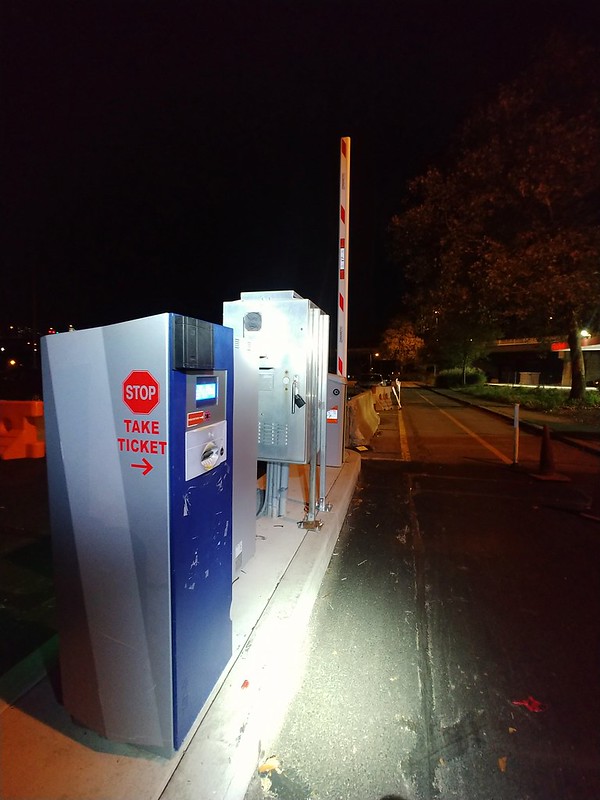 per reddit the part of the north shore trail that starts at millvale and peters out on the rocks in shaler along the railroad tracks is impassable due to 2 trees being down from the microburst a few weeks ago. Most likely the trees are in shaler territory and it’s unclear who will clear the trees, or if they’ll sit there for months or years.

Someone said that if you take the train tunnel, which is very dark, you can bypass the trees. The train tunnel starts right next to the turn-in driveway if you’re on E Ohio and turning into the riverfront park.

contacted Shaler Twp who said that while the trees were down in Shaler it’s on railroad property, so they’re going to contact the railroad.

from shaler re trees down on north shore trail.

I walked the trail this morning and found three areas of concern. I proceeded to speak with the foreman of the Millvale Road Dept and he stated that even though some of this area may be in Shaler Twp., Millvale Borough owns a majority of the property, before the tunnels heading north, so his road dept will handle removing the trees and debris. Thanks for letting us know about it.

Friends of the Riverfront is raising money to fix Eagle Lake. They think it will cost $80K but have received $10K from the Allegheny Trail Alliance and have applied for $50K in RAD dollars. They’re looking for an additional $15-20K.

I don’t think anyone uses it but the Elizabeth bridge is closed due to a crack. Unclear when will reopen.