An open love letter to BikePgh

Just got home from ripping around at Open Streets and I have a heart busting with love and gratitude for y’all, who work so hard and so much and give up your evenings and weekends to make sure other people are having fun and feeling able to engage safely and comfortably with our city. I feel like there is a ton of hype right now and I hope it makes up for all the years you guys were working just as hard but with less visibility on your work. I am so happy to live in a city with folks like y’all.

Fellow appreciators, feel free to chime in with your own mushy hearted comments here.

Bravo. Came through Lawrenceville on my ride and Butler was awash with modes of transport.

Thinking about where we are now, vs. two years or even one year ago–amazing. Great work, BikePgh!

+1 – I often ride through downtown around 8:30 on Sunday morning, and usually it is really dead. I can sometimes use my situational ethics of running a red light if I do not see any cars on the road in any direction.
But not today! I stood for 2 hours at the entrance of Point State Park at the City Spree checkpoint, and hundreds of walkers, runners, and cyclists came by. This did not even come close to the crowd at Market Square. I then rode the length of the Open Street. It was really inspiring to look up the road and see it packed with people on foot or 1, 2, or 3 wheels as far as the sight line allowed, which was very far most of the time.
Thank you to all involved in planning and implementing. I look forward to the next two. I can’t wait to see the positive news coverage and visuals in next few days.

Great job on Open Streets, and thanks to all the volunteers. It was just wonderful to ride out Penn in a throng of happy people. In fact, it was so much fun we did it twice. Glad to see people in the stores along the route when they fully opened, too — the cheese counter at Penn Mac had queues of people waiting.

KDKA, WPXI, and WTAE just used it on the FB pages in mostly controversial headlines to get the local geniuses out in full force and create havoc on the English language in the comments section. The local news has no journalism ethics. Their concern is to gain the most ratings from the lowest common denominator of society. Most journalism anymore is creating a horribly written FB post and letting the old local white haired boomers and folks not on their meds take at it on their FB comments sections.

It would be great to see a proper news source actually have articles that educate the public, use real reports with real statistics, and interview people who have something to properly say from years of education and work in transportation studies. But nope, it’s just a “Liberal bike riding cyclist from the city vs Yesteryear’s man from the 50s and his joy of parking”:

A few examples from our top local thinkers with the most FB likes;

Michael Stevens, local rocket surgeon from Port Vue has this to say;

“Closing roads so the overgrown kids can ride their bikes on the streets. Where am I living…Haiti? Just another little reminder why I’m moving away from this shithole.”

“i just think this is Pittsburgh’s pathetic way of saying we dont want to fix pot holes the right way so please put your vehicles away and ride a bike so you can more easily ride around the pot holes …. WATCH OUT BIKERS I WILL STILL BE DRIVING AND IF YOU GET IN MY WAY WELL….”

No, no! Plenty of threads to complain about drivers and the internet and the media. Only love in here please! :)

Sorry, emma. Love love love for BikePgh. Doing an incredible job.
I was just hoping to get on TV.

Bummed to miss this. But it looks and sounds like it was a great event. Brings back memories of doing Ciclovia while growing up in Colombia.

I took time to look for people looking for the odd thing, and I was definitely it. Aside from Thick’s setup in the Strip, I think I was the only unicyclist. I got a mention in the Trib’s coverage (with photo) and I appear in one still photo on WPXI’s Twitter feed.

I figure I was as much a part of others’ enjoyment of the day as I was enjoying it myself.

Hugs, Love, Respect to BikePgh. It isn’t often you can mark just one day as a tipping point – but between the OpenStreets and the BikeShare, the future started today.

It’s always seemed way downstream, and at times unlikely, but it really is a new day in Pittsburgh. And it arrived because Scott B. and all the BikePgh folks did a thousand things, mostly unseen and unsung. Probably Tom Murphy is due a shout-out, too.

Thank you so very much.

Stu; Were you on a tall unicycle – it might have been red? I saw one inbound on Penn at some point, but did not see the operator clearly enough to know if it was you.

Nope, not me. I saw it; it was part of the Thick fleet. I’d like to ride it. Maybe next time. It’s been (a whole lotta) years since I was on a giraffe.

I had on my yellow Flock shirt (first edition, with the guy holding a helmet).

Gah! I’m bummed I missed this. I’m behind schedule on planting vegetables, which is what held me back. Hopefully I’ll be caught up by the next one. If so, I’ll unicycle too

We had a great time. Next time we’ll get down there earlier, stick close to the bicycle train rather than parking it a bit away from the action, and take advantage of the length of open streets, but it was the perfect excuse to finally take it downtown and it brought a lot of smiles wherever it want. The ride back up to squirrel hill was… a good challenge.

Aw, shucks, Emma (and everyone else too, but she started the thread!). We’re so thankful to have all of you at our backs cheering us on, supporting us in so many ways (volunteering, donating, voicing your opinions, and tenaciously advocating for a better place to live). My staff is the best on the planet, and they keep impressing me week after week and year after year.

So very glad you all enjoyed the event. We still have two more this summer AND PedalPGH (oh, AND BikeFest)…. we’re going to need a nap at some point.

Yes, great event! By 11 am the streets were hopping. I enjoyed the music & dance & seeing lots of kids on the street. Here are a few pictures. 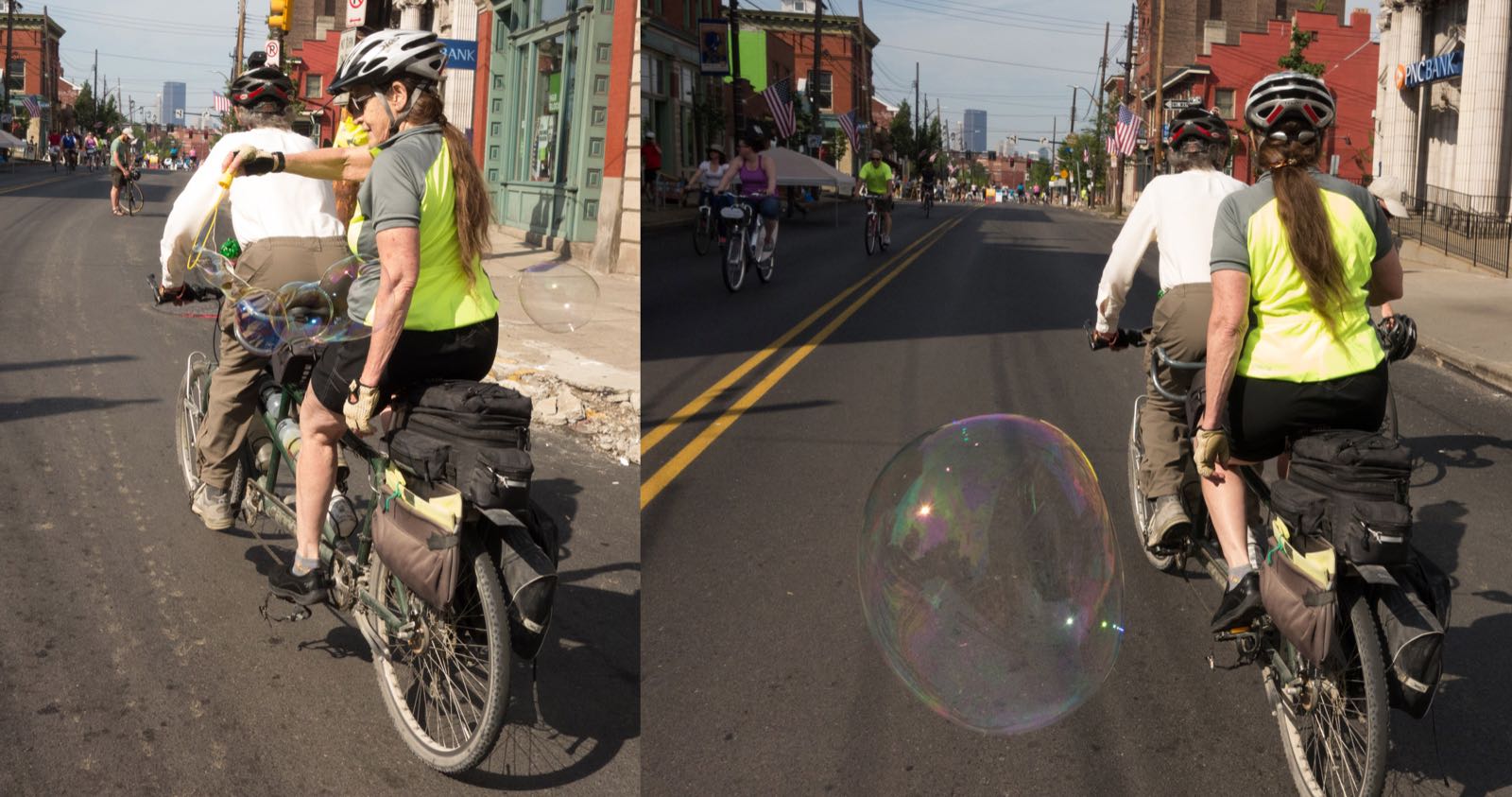 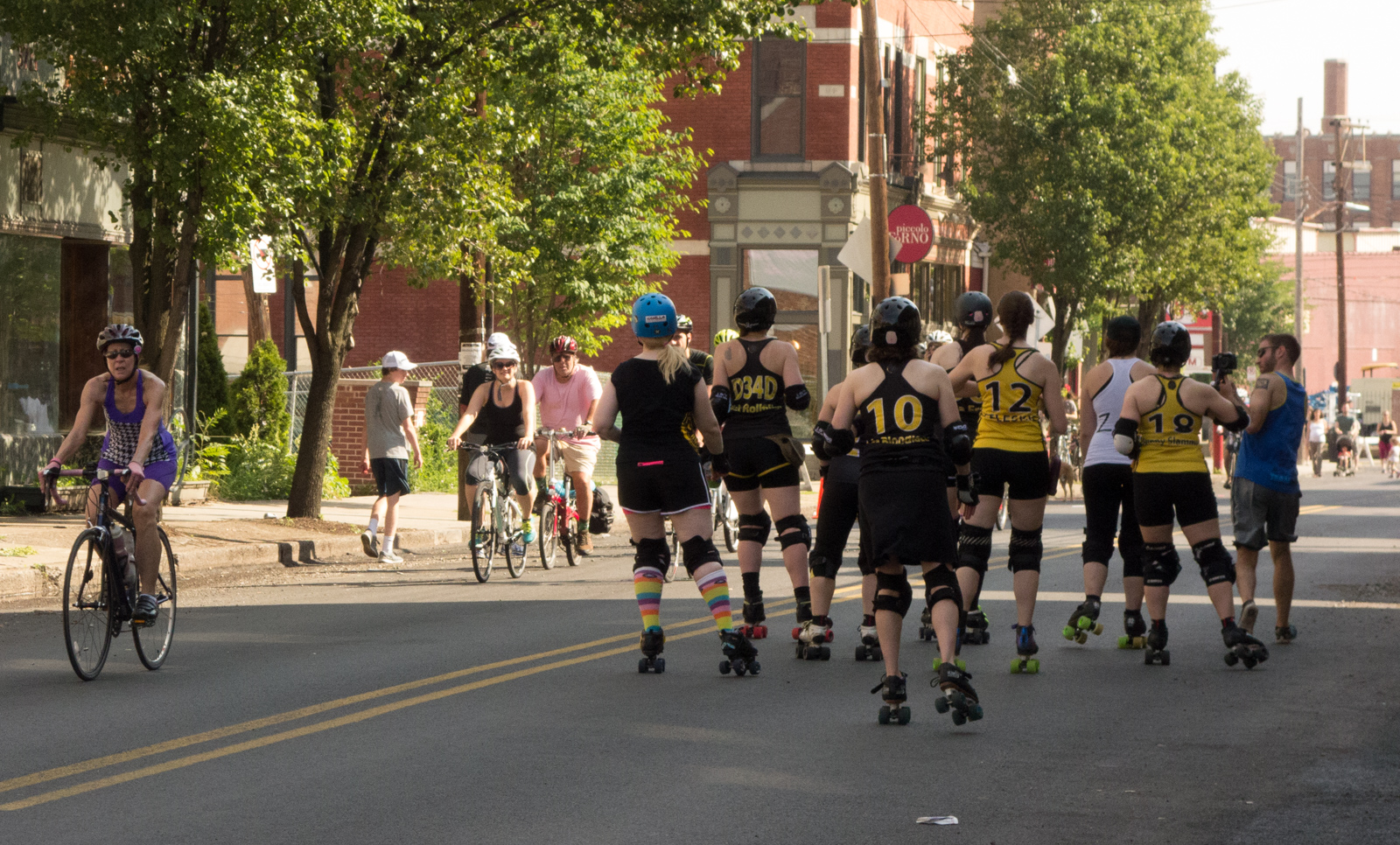 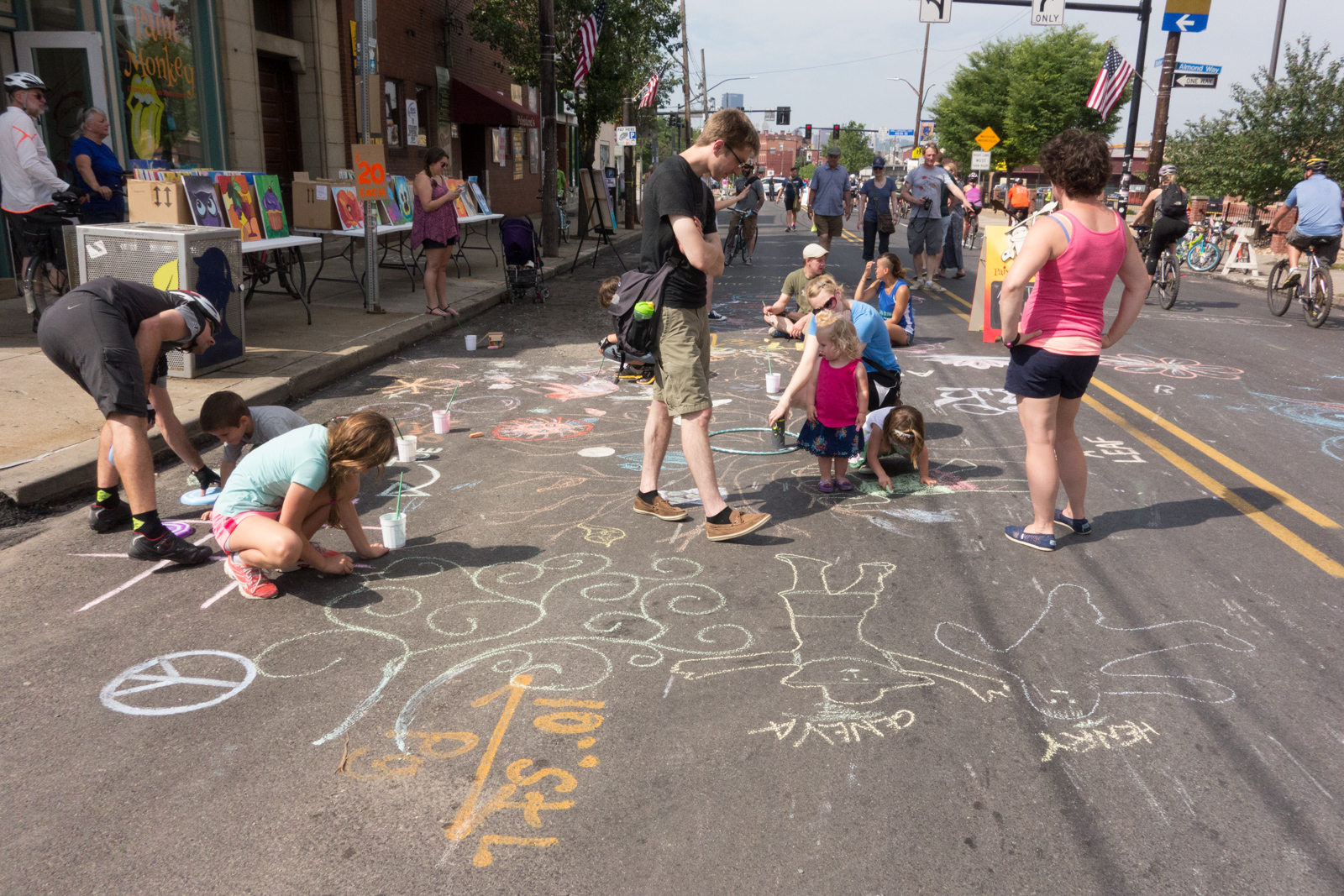 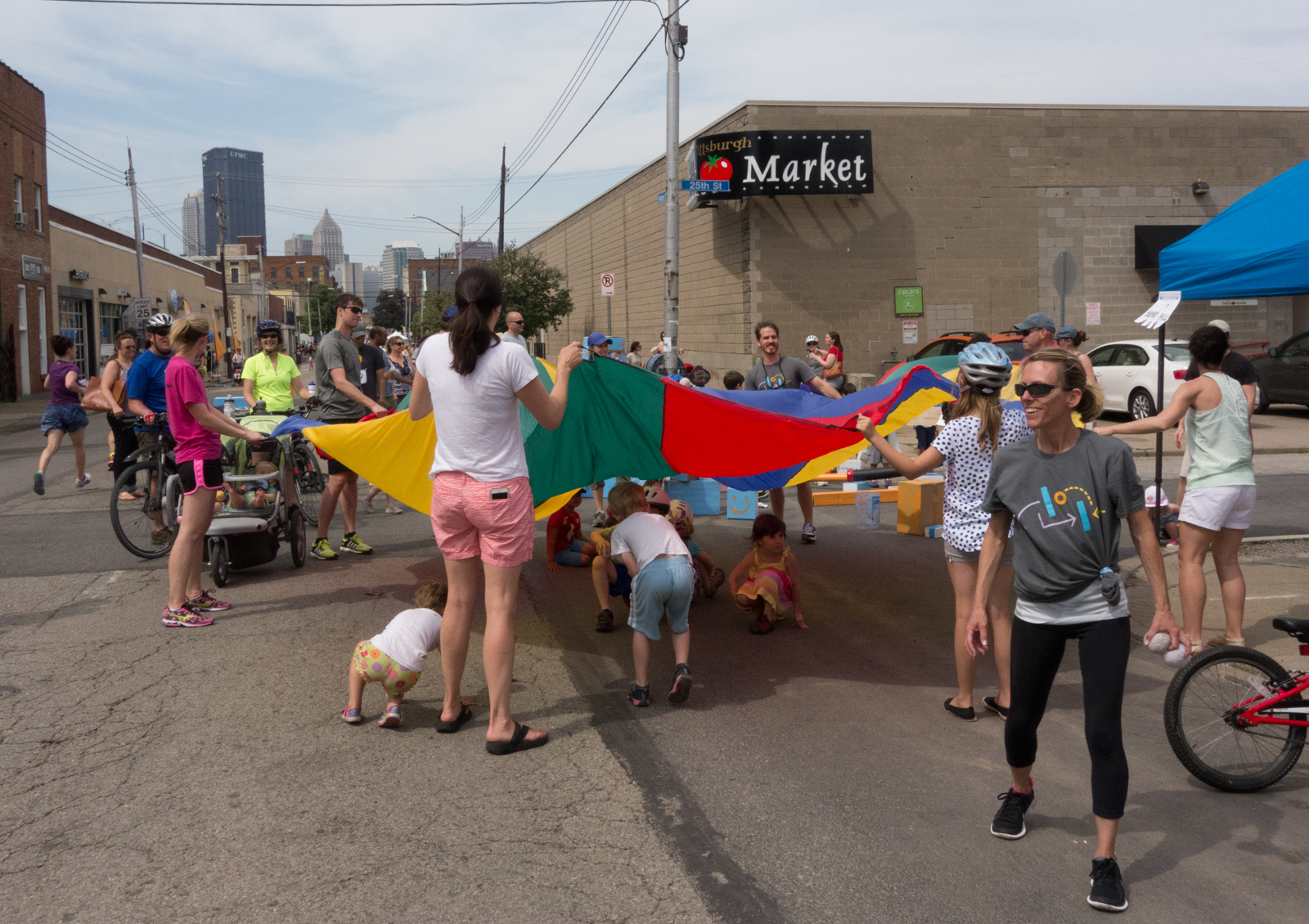 +++ Open Streets was fantastic! Thanks BikePgh

thanks for the pics, keep em coming!

Bahahahah. I am in the CP this week saying that you don’t have to worry about where to put your stupid car. 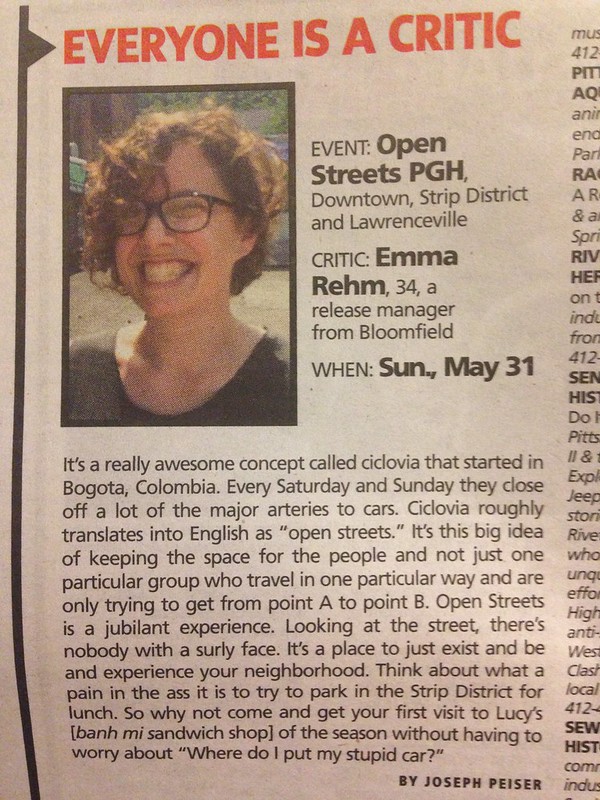 Approve of your name dropping Lucy’s banh mi. Have not had lunch yet, now I am sad.

Once again, another “well done!” to the folks at OpenStreets and BikePGH! Today was probably tougher than expected given the crappy weather for the first 2 hours of the event, but I saw a lot of smiles and families out there on their bikes!

I was trying to register as volunteer on Thursday night and Pittsburgh Care told me that event registering is closed. :(

It is important that I preface what I am about to say by saying the Open Streets event Sunday was awesome, loved it. It is a huge boon to the city that builds livability and the quality of life. So don’t flame me up.
I didn’t attend the previous 2 open streets, so I can only comment on this one. There were areas at this one that got too congested, even considering it was more of a recreational event, and the idea was to intentionally dilly-dally, slow down, and enjoy.
But… I couldn’t help but have the thought that Amsterdam or Copenhagen would probably get really bloody annoying. If I want to get from A to B on a bike I WANT TO BE ON A STREET WITH CARS as is permitted by law. Sorry for the shout, but I need to stress that strongly. I feel more strongly than ever that I would never accept relinquishing the right to travel on public streets as a compromise to achieve bicycle specific infrastructure.
File that. Thank you for listening.

Another pleasant day, thanks to all who worked/volunteered to make this a success!

Two cents for consideration: The stretch from 10th street to 16th street (and a few other spots) is mostly devoid of businesses or other attractions. While this stretch goes by quickly on a bicycle, it’s rather boring to walk. While discussing this with a few friends we hit upon an idea – why not let people set up tables for a flea-market in these non-commercial areas. This would fill in the stretches that don’t have much going on, and it might draw in some folks who view openstreets as some sort of athletic event instead of the community gathering that it is.

the idea of bands or something was also suggested, especially on the bit between 33rd and 26th, another long stretch of mostly warehouses and industrial shops…