ARE YOU AT RISK? – Area Cyclists attacked. 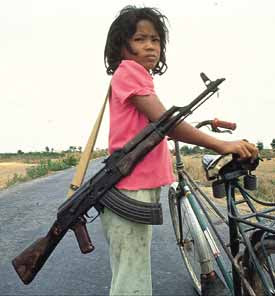 Anything else we forgot? OK, let’s roll.

EDIT: Oh right, thanks, msprout, the rack is where the ninja rides.

Self-defense mechanism that can double as a means of propulsion (“equal and opposite reaction” FTW), priceless.

Giving a child an AK-47 is just bad parenting. The “S” version with the folding shoulder stock would be so much more suitable for biking.

Unfortunately plenty of the kids in E Lib are packing which is why showing up with a gun is not going to change the game whatsoever.

I am usually the one with the twisted sense of humor, but I guess it’s just my turn to be the humorless git.

What you’re looking at there is an abused child. Cultures that use child soldiers are sick societies.

So, sure, more power to you if you can find some humor in it, but don’t forget that that kid has probably endured more horror than you can imagine.

…and Lyle’s probably on to the truth about the kids in EL. Their own private hells are as real to them as the girl on the bike above.

Only slightly off topic: There’s a series of novels in the teen fiction section by L.A. Meyer called “Bloody Jack” (name of 1st book). It’s about a girl in 1800 London who grew up on the streets, lived with a gang under a bridge, then chose to disguise herself as a boy and join the Royal Navy. Tangles with pirates, gets the crap beat out of her a couple times, shoots people, almost raped, y’know, normal kid stuff. But it is a really fun read. Not kidding. (Extended Pittsburgh scene in Book 5, if you get that far.)

Agreed with your stance on child soldiers but you’re making a big assumption about the context of that photo.

I didn’t find any information about it, just the pic.

There are plenty of cultures in the world where it’s not out of the ordinary for young people to carry around a weapon while they help the family herd livestock etc. The fact that it’s a big ole’ AK doesn’t necessarily mean anything other than whatever country that is was once occupied by the Soviets.

OR, it is a child soldier and we should be ashamed to make light of the photo. Your guess is as good as mine but you can’t really tell from that photo alone and neither can I.

FWIW, that photo appears in a gallery of child soldier photos here:

(Is this the message board version of that awkward silence where everybody waits in acute discomfort until someone changes the subject?)

That picture was taken right before Chuck Norris rescued her and a nice family in Beverly Hills adopted her.

Back to the topic at hand:

Thunderfury, Blessed Blade of the Windseeker

weelllll, I guess that about answers the question Steven. Lyle, you were clearly right.

sweet, when you get knocked unconscious off of your bike, there will be another gun floating around the hood!

if you pull your gun out and you haven’t fired a shot within a few milliseconds, i’d expect you’re going to get your ass shot with your own gun too!