This might be spam, let me know if it offends anyone.

Here are a couple pieces I made recently. I thought the bike pgh message board might be interested. I am working on setting up an online store and making enough that i can start selling it.

I really like the key hook thingie, the clock is quite nice too. I took a picture of a piece a guy made in Tofino… sigh, Tofino… that I should post. It was a big, beautiful shining sun made out of bike chains and the like – he actually had to abuse everything quite excessively to try and get it to develop the rust shades he wanted.

I’m probably biased, but I always like artsy things made out of mechanical things, especially if those mechanical bits are no longer useful but led a good, long life. It’s like a tribute to all their usefulness and good work… Maybe rather shinto of me, but I think those gears and chains are happy in their new useful life

If you want to measure possible sales without getting into your own website, you might try to get in touch with “I Made It Market.” They had a bike-themed art show during the 2010 Bike Fest. It was held at Leslie Park in Lawrenceville.

Seconded for imadeit. Carrie is pretty cool about new vendors and as far as I know no-one is doing anything quite like your stuff, aside from Garbella which is mostly apparel.

Thanks, I will check into the I made it.

@ejwme: I would like to see the picture of the bike chain sun.

Jason – this incredibly awesome guy: http://www.tofinotime.com/articles/A-T506-14frm.htm made this sculpture: 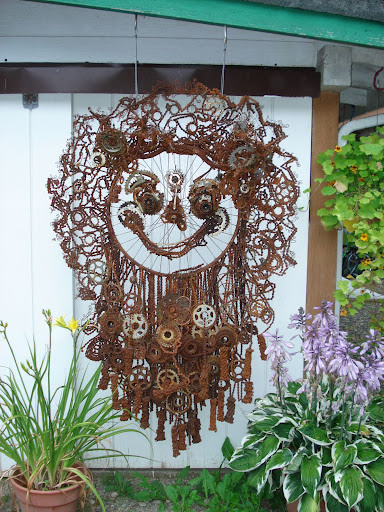 The photo barely does the rust textures justice. Since he rents bikes out for riding on the beach, the salt and sand does them in and he has a lot of turnover – so he uses it to create beautiful things. He also leads awesome private kayaking trips that will go places the public groups can’t go (he’s got friends in the area on various islands).

wow, that is awesome!

Marc said they had to work very, very hard to get the chains to rust that much, apparently the precautions manufacturers take to prevent rust are seriously effective.

BTW, the article says his shop is “very organized”… Think visual opposite of Kraynick’s. Just as awesome in terms of volume and variety and owner awesomeness, but literally every iota has a place, and every place an iota, in visibly labeled, lined up fashion. Extremely satisfying to the inner OCD in me, just as Kraynick’s is satisfying to my inner chaosophile (yes I know it’s organized… somehow…).

I finally got some items listed on my Etsy store.

Edit: actually, now that I look at it, it still looks like a car key.. I thought for a moment it might have been a U-lock key.

Yea, that one is a car key. It is my backup key ring. My primary key ring has the u-lock key on it.

Now that I think about it, I don’t think I have a spare for the u-lock.