Really amazing footage of the accident today where a TV car clipped a rider at the Tour. Any driver who thinks it’s okay to pass within 2 feet of us should have to watch this.

Both riders finished the stage, will see how they are after the rest day tomorrow.

Good lord. Watching the guy flip into the barbed wire fence made my heart drop into my stomach.

ouch, they must have hired a pittsburgh driver.

Simply astounding. And I think calling it “clipped” is being charitable to the driver. I think of being clipped more as what happened to Sorensen with the the moto earlier-ie, getting passed too close. Here the driver basically swerved right into them. ASO’s rules (or maybe UCI, I forget) specifically speak of criminal punishment for drivers on the course, and if this doesn’t qualify I don’t know what would. Insane.

Both Hoogerland and Flecha will wear red numbers on Tuesday as the most combative riders on today’s stage. There is chatter about lobbying the race organizers to give both riders the same time as the rest of the break (which finished several minutes ahead of the group of GC contenders). Don’t know if anything will come of that.

This race has been a mess of accidents. Nicky Sorenson got caught up with a moto earlier in the week and watched his bike dragged off into the sunset. Several other GC contenders have gone done and abandoned because of wrecks. 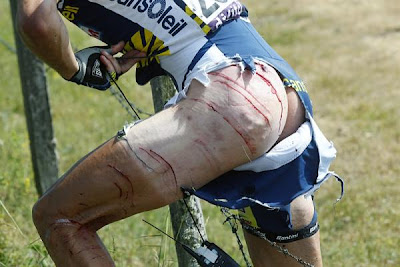 If some american football player did something

1/2 as awesome as this, it would be heard

about for the rest of our lives.

Look at that tan line.

I couldn’t believe it when I saw it.

I think people need to stop the “sissy bike racer” sterotype. Seriously, Getting hit by a car, thrown into a barbwire fence, and then finishing the race is totally hardcore.

Yeah I just saw that watching the replay. That picture is unbelievable steevo.

Hope he’s up to date on his tetanus booster.

Saw the replay last night. Looked like the driver was trying to avoid a tree on the other side of the road. Made me think that if he had hit the tree, that car might have ricocheted back across the road and caused much worse carnage.

As it is, holy cr*p. I can’t believe both riders finished. Jens is wearing a Hoogerland t-shirt today.

I think people need to stop the “sissy bike racer” sterotype. Seriously, Getting hit by a car, thrown into a barbwire fence, and then finishing the race is totally hardcore.

There are those of us who dislike the process of turning a decent form of transportation into a macho competitive sport.

As long as there’s guys in lycra that don’t warn me as they pass way too close, I’m not liable to change my mind.

There would have been no trouble avoiding the tree if his wheels were on the pavement. He was edging over off the pavement and I think he dropped a wheel off into the grass, which is why he swerved so badly.

I dunno, from that video, it looked like the car was giving the tree more clearance than it was giving the cyclists before the incident – looks like it could have gotten by scraping the car up without any change in steering… it was probably an over correction “doodedoo… ACK! TREE!”

Mick, there’s a whole ‘nother world of “Competitive Walking” ( http://en.wikipedia.org/wiki/Racewalking ). Some people are wired to compete, and will create competition to satisfy that. It can be hilarious, and it can hurt, sometimes all at once.

I watch the tour and it amazes me that something like this doesn’t happen every other day.

Mick, I hate race cars cause people who drive

cars around me are jerks.

Ya know, I was wearing straight-up lycra this weekend (except for my wool socks), and it was admirably well suited to the conditions in which I rode.

Of course, it may have led me to pass various GAP trail-users far too closely, but I was too busy admiring the play of my own thigh muscles under the shorts to notice.

people who chose to engage in similar activities as the ones i pursue, but for different reasons are jerks!

@ steeveo Mick, I hate race cars cause people who drive

cars around me are jerks.

We spend a lot of time here talking about how we can change car drivers.

If you dislike the the well-earned rep that the lycra-clad, hypercompetitive riders have, why not take some time to try to influence them, instead of hating on us that speak out.

I doubt that reddan let himself be inconsiderate of other traffic (to better admire his thighs), but there are plenty that are.

If competitive a walkers started self-styling themselves as “serious walkers”, and started risking my safety on the sidewalk, I’d speak out (more) about them. If that behavior was associated with a style of dress, I would likely critique it. here are his legs normally.

lucky he didnt catch a vein

I’m repeatedly astonished that I am considered the same species as these Tour guys (and the NASCAR lot). Though having not reproduced or had a DNA test, I suppose I can’t prove it. But even the good possibility astonishes me.

There are those of us who dislike the process of turning a decent form of transportation into a macho competitive sport.

Man…. that is just… without words!

look, i don’t compete on or off road. i’m about as far from a “lycra-clad roadie” as you can get while still owning a road bike. but to fail to realize that a)many people cycle for many different, and equally valid reasons or b)a lot of people who race also commute (and post here frequently) and spew nasty remarks that paint all racers and wearers of spandex with the same broad brush is to remain willfully ignorant of reality and does not speak well of the person saying such things.

Personally, most of my bad experiences with other cyclists come from people wearing tight, pegged jeans or people with messenger bags (note: there may be an intersection between those two groups). Quartuccio’s law is in effect here: people are idiots; some of them ride bikes. Some of those people wear lycra, too.

Mick is very nice to triathletes.

I race and commute. Same rider. Two bikes. Vastly different outfits. No one should be too quick to judge — and the judgement can easily go both ways.

@Mick “If you dislike the the well-earned rep that the lycra-clad, hypercompetitive riders have, why not take some time to try to influence them, instead of hating on us that speak out.”

Have you ever even met Steevo, much less ridden with him?

“There are those of us who dislike the process of turning a decent form of transportation into a macho competitive sport.”

Mick, there were competitive cyclists long before you were born. Maybe they were cringing “Ah! There are those of us who dislike turning a competitive sport into a form of decent transportation!”

Isn’t your real problem unsafe cycling? Do you really think when people see you cycling around they’re associating you with “a macho competitive sport.”

What exactly is your problem with cyclists that wear form fitting clothing? Do you really believe that because some you’ve encountered (how many?) didn’t meet your needs for safety that they all ride unsafely?

I wore lycra-shorts today for commuting, and lycra is just comrfortable for riding -period!

Most of the lycra-clad riders I’ve seen on the road have been nice, courteous, and respectful of the road. While OTOH, it has been the tight-jeans, messenger-type, no-helmet dorks who have been at times rude.

But getting down to the point of the thread: that accident is just ridiculous! And I can’t imagine how that must have felt -ugh.

@steevo: looking at the guy’s normal legs with all those veins -that is scary, and I guess that’s normal for cyclists according to this buzz I saw:

Anybody care to explain how this hap[ens? And how it is normal?

Steevo is a real meanie.

For someone who seems pretty open-minded, that statement about lycra types seems kind of out of character Mick.

Over the weekend, on the same day, I went from doing a 45 mile road ride in lycra, to riding to a restaurant to meet my family for lunch, to riding my 50 lb 5 spd cruiser with the family, in baggy shorts and a tank top. Then in the evening I watched some of the Tour. I did not experience an internal argument with myself. I had no negative incidents with myself, any other cyclists, or cars. In fact, it was a fantastic day.

The Dutch are somehow able to be the most active users of transportation cycling, as well as the most insane followers of competitive cycling. It is not an either/or equation. The Dutch are a wonderful people. Probably not too happy with the France Televisions right now, though.

Also, those legs are fully grossing me out. That must be why they put the leg warmers on for the podium, so the podium gals will even get near to them. Podium gal job must be tougher than it might first appear.

oh, bikeygirl, that photo is just creepy in a skin crawly kind of way. And I’m not creeped out easily.

I’ve often wondered what we’d all look like if humans developed exoskeletons instead of skin, and why there are no large creatures with exoskeletons (a la Starship Troopers, but maybe with thumbs and speach and not as gooey… Kafka-esque but with less indiference). An exoskeleton would help one avoid that appearance, but could affect sense of touch. Tricky that. Would definitely change the whole first aid world, and weight gain would have a more immediate and violent effect… too much digression, sorry.

lycra… I’ve not seen anybody on a bike wearing lycra that didn’t sport it quite well. Haven’t personally noticed much else about the lycra set other than generally superior calves and thighs (then again, perhaps I’m more distracted than I thought). But I do not encounter “them” much on a bike, or perhaps simply don’t notice them. Mick I hope your bad encounters have been rare, though it seems it/they left an unpleasant impression.

Any speculation on what the largest animal is with an exoskeleton? King Crabs?

I guess we have to define largest- would that be dimension size or biomass?

helen s – I always think of horse shoe crabs as the largest, but have absolutely nothing to back that up, it just comes to mind. They seem like such an ancient species… things with exoskeletons in general seem very ancient. Makes me wonder why that tree doesn’t have more branches. Did something else get in the way? or did it just run out of variations?

I once had a history teacher say “Never play the ‘what if’ game. It’s fantastic fun, but in the end it’s just a game and will get you nowhere fast.” It’s one of my favorite games to play – endlessly amusing.