And they called it an “accident.”

BRADDOCK (KDKA) — A 90-year-old woman crashed her car into a home in Braddock Hills Sunday morning.

Take a Break Bar on Penn in Lawrenceville was hit by a pickup truck.

I was very close to that today. I’m glad I did not witness that

Based on what I’m seeing here, it appears that a car crashed into the bus shelter on Forbes Ave just west of Braddock Ave. This must be the repair crew. 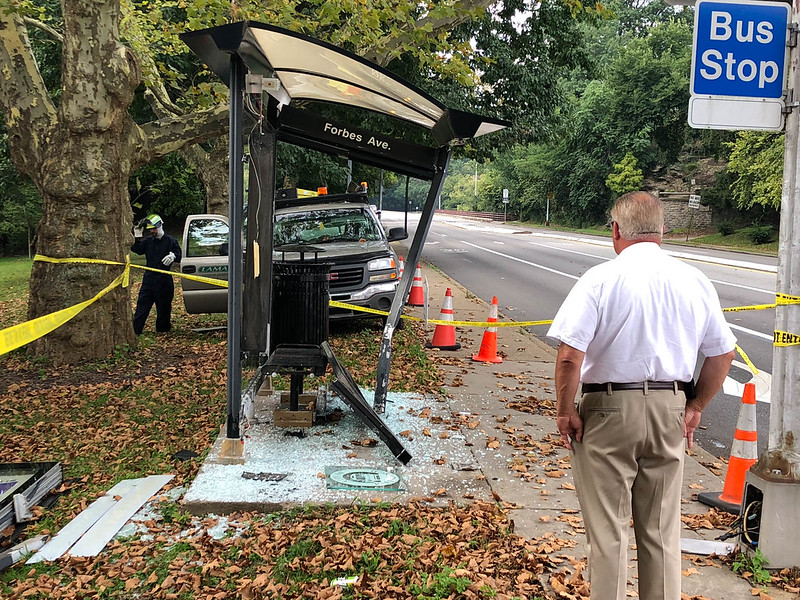 It’s interesting and sad that a smashed advertising sign gets repaired a lot more quickly (a day or two?) than a cracked sidewalk, a trail railing bent by a car, or knotweed overwhelming a sidewalk, which go for months or years before being addressed. If only we could divert some of the money that currently goes to companies like Lamar Advertising to help maintain sidewalks, bike lanes, trails, and sidewalks.

Actually Lamar pays PAT and or the city and also does upkeep of the shelters in exchange for the right to sell advertising on them.

Here’s an article where the Lamar agreement is mentioned. In this case it’s in a private company’s best interest to get the shelter back so they do it quickly. Plus insurance probably reimburses on the back end.

The door of the van in the picture says LAMAR.

I see that. But in this case the city gets paid by lamar, lamar doesn’t pay the city. And it turns out that PAT doesn’t get a cut at all. So there’s no real money to divert in this situation. I also agree that sidewalks/railings/etc are quite abysmal in areas and the city/penndot/county often don’t fix it or spend their time fighting over who does the road vs. the sidewalk instead of actually doing the work.

Interesting here in Fox Chapel when Delafield washed away the county was out paving it within 10 days. THey also re-did the sidewalk even though last time the sidewalk was redone (by the county and ohara) it was clearly stated that it was the homeowners who would be responsible for the next fix…

If only we could divert some of the money that currently goes to companies like Lamar Advertising to help maintain sidewalks, bike lanes, trails, and sidewalks.

Do you mean divert the advertising money, so in addition to having ad-supported bus shelters, we’d also have ad-supported sidewalks, bike lanes, and trails (plus additional sidewalks)? I’m not sure I care for the Great Allegheny Passage Sponsored by Ultra-Fresh.

For a while there, we had a Station Square subway station with a strong Listerine Mint odor. Does that count?

That’s so amazing given how high the fence is over there.

Though I guess when you’re drunk instead of dukes of Hazzard jumping the fence you just plow through it. Time for a big ass concrete barrier.

I was just about to post about the Giant Eagle crash, but hey, there’s a wealth of car-into-building (and into cars/over hillsides too) articles today!

Why does the Giant Eagle crash landing keep coming to mind?

I’m guessing Giant Eagle’s roof doesn’t have even one No Parking sign. How was that poor drunkard supposed to know?

CRESCENT TOWNSHIP (KDKA) – Officials don’t know how the driver of a truck ended up plowing into several parked cars and an apartment building along McGovern Boulevard in Crescent Township.

Vehicle Crashes Into Building While Fleeing From Police, 2 Injured

Vehicle Crashes Into Building While Fleeing From Police, 2 Injured

suv vs. house in manor pa

I can’t even imagine how that happened without contribution of substances or a medical condition.

And I love the #accident hash tag.

It’s the Holidays! Time to start driving your car into your local Nativity! ***JESUS CHRIST!***

If that’s not exciting enough, try driving over your neighbor’s inflatable snowman!