I thought about putting this in the out of town news thread, but it’s more relevant here.

PLUM BOROUGH, Pa. — A car crashed into a restaurant in Plum Borough Wednesday, right before the dinner rush.
http://www.wpxi.com/news/news/local/car-crashes-restaurant-plum-borough/nnDm3/ Vehicle hits bus, then house in Allentown. Driver runs away:

Car crashes into Hill District home. The driver and passenger end up in the hospital. The building may be condemned:

But was the cow wearing a helmet? Where was he going at 10 o’clock at night? Soo many questions – unfortunately the cow didn’t make it.

LUZERNE TOWNSHIP (KDKA)- A Fayette County man is recovering after slamming into a cow along Bull Run Road.
Driver Injured After Hitting Cow In Fayette County

“The van was traveling on Herminie West Newton Road when it went through a yard, striking a large rock and going through trees, before crashing into the truck and house.…Needles were found on the ground at the scene. Family members of the female driver said she is diabetic.”

@Marko82 — But was the cow wearing a helmet? Where was he going at 10 o’clock at night? Soo many questions – unfortunately the cow didn’t make it.

I dunno. Maybe she was looking for the bull that ran away from her on Bull Run Road??

Weirton: A fire truck backing into the station hit the middle of the building’s load bearing wall, bringing down the wall, part of the roof, and the front facade.

The woman that crashed into the gates of Allegheny Cemetery a while back was sentenced to 6 months of house arrest. Link to news article.

That video of the crash makes me want to grab some popcorn. It looks like something out of a Michael Bay movie.

Holy crap! the only thing missing from that video was the car exploding upon impact with the gate, 1980’s movie-style.

At that speed, she was “lucky” to drive straight through the gate instead of crashing on one of the gateway columns. This is her second DUI, so that’s supposedly at least a 12-month license suspension, depending on how high her BAC was. 6-month house arrest? She got off easy

PS: The comment section of that article has some people begging to be banned from there

^how does one keep their license and vehicle after something like that? State should impound property after multiple incidents of DUI.

Looked like a scene out of Serpico. She’s lucky no one was seriously injured there due to her negligence.

The Dormont incident made today’s edition of Eat That, Read This, as

‘• Today in #CarCulture: “A man lost control of his truck and slammed into a house in Dormont Saturday night.” ‘

As you can probably imagine, though the link goes to KDKA’s story, that’s not their original headline…

A car crashes into a Subway in Beaver county at 4 am:

Two men were inside the vehicle. There’s no word as to if either of them was driving the car. Also no word on if the Subway was wearing a helmet or high visibility clothing

Their paint scheme uses a lot of yellow. But I bet the Subway didn’t have its lights on.

Another self-driving car crashes into a home, this time in Penn Hills:

Yay! The donut shop on Steuben St has reopened. Page back to Page 23 of this thread, 15 Apr 2015, for our detailed analysis.

There was another one we missed from a couple of days ago, of a car into a pizza shop. One report said Robinson, another said somewhere out Noblestown, I’m not sure who’s right.

Is there a particular pattern with pizza shops? I seem to recall that as a recurring theme. I suppose if I had nothing better to do with my time, I could go back and tally all these by category — pizza, other fast food, supermarket, horse in a farm field, swimming pool, etc.

The Mineo’s pizza shop was in Noblestown shopping plaza, Noblestown Road, kind of on the butt side of Greentree, next to Crafton.

I don’t know whether the car actually impacted the house here, but it’s pretty darned close, on its side in the front yard, and only a few blocks aeay from where James Price was killed.

One killed here, too.

That’s my friend’s house. Can confirm, house was not hit (only damage was to the retaining wall).

About the crash on Penn (which appears to have been closer to Murtland than Lang), WPXI wrote:

Michael Herring saw the crash and called 911. “I was at the intersection at Penn and Negley and this car passed me on the left on the double yellow line and was driving about as fast as that car would possibly drive.” … There was no immediate word as to what may have led to the crash. http://www.wpxi.com/news/news/local/1-dead-1-hurt-after-crash-pittsburghs-north-point-/npW7x/

I wonder if speeding might have had something to do with it? Penn & Negley is on the other side of East Liberty. Perhaps the Surtrac cameras recorded pictures of the car zipping thru? (Does Surtrac save video?)

My armchair+streetview speculative reconstruction of the crash tells me that the car was eastbound on Penn at high speed, veered right for some reason, missed or scraped a telephone pole close to Penn, hit the retaining wall before 7020 Penn, the front end of the car got hung up on a guy wire for a telephone pole, the front end of the car went up in the air and the rear end swung around so that the car did a 180 in the air and landed on its left side. That car must have been going very fast.

On WTAE they said that cinderblocks were sent 20 yards down Penn Ave by the crash. http://www.wtae.com/news/one-dead-in-thanksgiving-morning-car-crash-in-point-breeze-north/36673404

Man crashes his car into a house in Robinson:

So apparently this guy was trying to parallel park and backed into @cwpress in Mt Lebo. @YaJagoff @YinzCantPark pic.twitter.com/agyNl4YjkP

Youngstown OH woman climbs a utility pole with her car.

It’s not too often we get the crash itself on video.
Drunk crashes truck into house

Another one, this time in Munhall. Per WTAE:
Vehicle crashes into Munhall social club

Did someone go shrub-surfing at Baum & Millvale recently? There’s a quite prominent dent in the corner of the Chipotle I don’t recall having been there a week ago….

This string of posts can be traced to reading the Eat That, Read This newsletter. Here’s another one:

Runaway truck with no driver crashes into Mt. Lebanon home

Runaway truck with no driver crashes into Mt. Lebanon home

Car Slams Into Front Door Of Home In Polish Hill

Apparently, he kept backing up to get away, and it was ringing the doorbell.

Inside the house on Polish Hill: 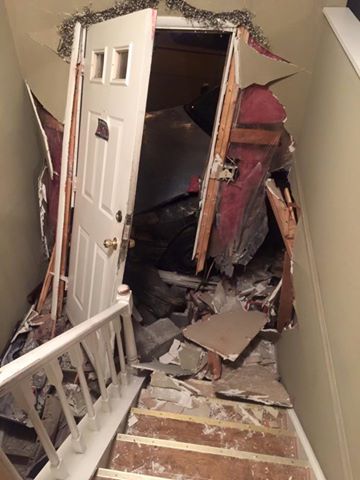 Oh, and the driver didn’t have a driver’s license, but that’s OK because NO ONE EVER CHECKS.

When I rolled by at 8:15 the car was still parked in the doorway and all three news vans were there.

Another image of that, from the outside, via the Trib via WPXI.

Link to the Trib story

I love how, in the middle of the KDKA story, there is a car ad running!