Not really a building, but this just happened outside the BikePGH office. dude in the passenger seat was taken away on a stretcher.

stretcher? For a car going over a curb? Some curb.

who knows what happend inside. if dude wasn’t wearing a seatbelt, a whole bunch of stuff coulda happened

Augh!! Scaffolding! It’s *after me*! Gotta get awaaaayy!!

Those curbs can be vicious.

That curb looks it came out of nowhere.

It is highly visible, and identifies the wearer as part of traffic. Perfect.

edited to correct gender. i think. the vest is so bright!

I bet the driver will say they couldn’t see the pole because the woman was standing in front of it. Hope the pedestrian is ok but “severe leg injury” doesn’t sound good. My guess is the driver was turning left onto 7th and trying to make it through way after the arrow had changed and pedestrians started to cross.

@salty – from the PG story you linked:

“The car struck the woman and then hit a pole.”

The night before, some guy was unloading groceries out of his car in Wilkinsburg and was hit by a woman who, according to eyewitnesses, “appeared to be reaching for something inside her car”, i.e. texting.

Another one: Thanksgiving night a guy ran off of the road in front of my house, took out my next door neighbor’s first retaining wall, concrete stairs and railing, second retaining wall, and the next neighbor’s bush. He never touched the brakes.

I came outside and screamed at him to put in park – he was trying to take off despite not having a right wheel. He ended up with a DUI, and the two (I’m pretty sure) prostitutes in his car got a ride home from the cops.

Cars are a reoccurring problem at our house. See my handy diagram here: 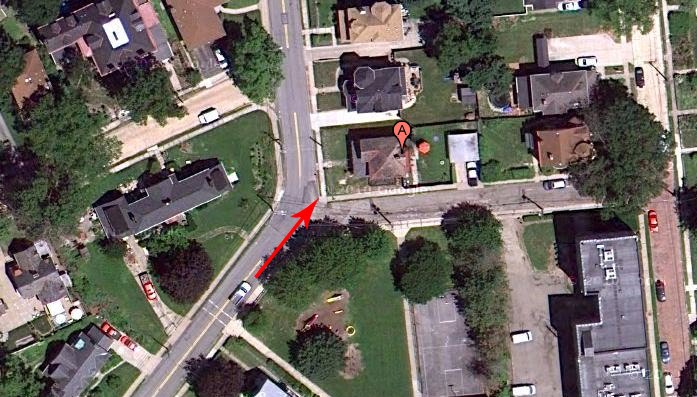 Crafton tells us they can’t do anything because it’s a PennDOT road.

Does anyone have ideas for where I should start complaining? This is the third major car-in-yard accident on my block in three years.

My neighbor has been complaining to the state rep, but that’s getting us nowhere. I really want to start making some noise before I end up with a car on my front porch.

What about your Borough Council? If you can convince them of the problem, they should be able to advocate with the State, which may be more effective than an individual resident trying to contact the rep.

That’s a good idea. Unfortunately it really only affects 3-4 houses on the road, so it’s hard to make the case that it’s a huge problem. Though since we’re right next to a park that often has kids, there’s that angle on it too.

I’d love to see a 3-way stop at the intersection by the house. That would solve the problems 100%.

The hubby and I already plan to install steel supports when we redo the low rock wall that separates our yard from the sidewalk.

It doesn’t need to be a Borough-wide problem. Its not as though you are asking for an ordinance to be re-written. You just need them to advocate with the state about the risk that intersection represents. Start with your Borough Manager, and make sure to follow-up in person at the next Council Meeting. Get your affected neighbors to attend as well. Good luck.

The solution in my neighborhood is to install some really large rocks in the yard.

Seriously, though, the problem isn’t cars running off the road, it’s drunks getting behind the wheel. Put some teeth behind drunk driving laws — mandatory impoundment of one’s car on the first offense, for instance — and head off the problem in the first place.

I am uncertain to the truthfulness but I have heard that installing such things can backfire should someone get injured on the large objects installed as a deterrent. The example I heard was a mailbox within a mailbox to combat people hitting it with bats. A car clipped the mailbox and had substantial damage and a passenger was injured and the land owner had major issues. I never spent the time to find out the truthfulness but I can certainly see how a lawyer could twist things around.

I agree with Stu, make the penalties mean something. Life altering penalties work pretty well. Loss of license and impounding the vehicle certainly will change someones life enough to think about their actions.

Since when has loss of license prevented people with multiple DUI’s from driving?

Who pays for the repairs to your lawn and such after such an offroad excursion?

As with anything in this world nowadays, you probably need to file a lawsuit. Probably against PennDOT for negligence and forward them the bill for lawn repair? Idunno. Try to find a lawyer who is willing to listen.

I had the bashed mailbox problem when I lived in New Stanton. The problem went away for me and everyone when I installed a piece of 8-foot angle iron, buried in the dirt about two feet upstream of the mailbox and angled upstream a bit, pounded in as deep as I could get it to go, about three feet. One night, I heard a car come along, followed by a thunk and the crash of side window glass. The mailbox remained untouched. The car kept going. I left the angle iron there the rest of the summer, but neither I nor my neighbors had another such incident.

@ALMKLM – Kinda hard to drive a car that’s not in your possession.

impounded cars can be gotten back. perhaps you mean permanent loss of their automobile? that would be unamerican! and besides, there are more teeth behind drunk driving laws than any other driving offenses. you still have to convince drunk people that it might happen to them.

at the notion that installing protective boulders might be detrimental in the instance that someone crashes into them: i am not a lawyer (though i did help one pass the bar exam!) but that strikes me as pure poppycock. there are a lot of sue-happy urban legends, and that sounds like it fits the bill. if that were a real issue, it would be impossible to install guard rails. which, incidentally, is something i would consider pursuing. a house on ellsworth got one after a few too many cars crashed on their lawn. and another, come to think of it, at the base of canton.

@HV… guardrails are designed to be impacted, rocks are not. I agree that it is probably an urban legend but you never know.

That being said, a nice boulder landscaped into the yard with a flagpole looks much nicer than a hunk of galvanized steel.

Re: rock walls. We actually have a rock wall, which stopped a car this winter. It’s original to the house, which makes me suspect horse drawn carriages also ran off the road in 1890.

My fear, and hubby’s fear, is that due to its slope (see image), a car going fast enough will use it more as a ramp into the porch. In fact we know it happened at least once in the 80s. So we plan to rebuild it and reinforce it after we finish the rest of our house renovations. 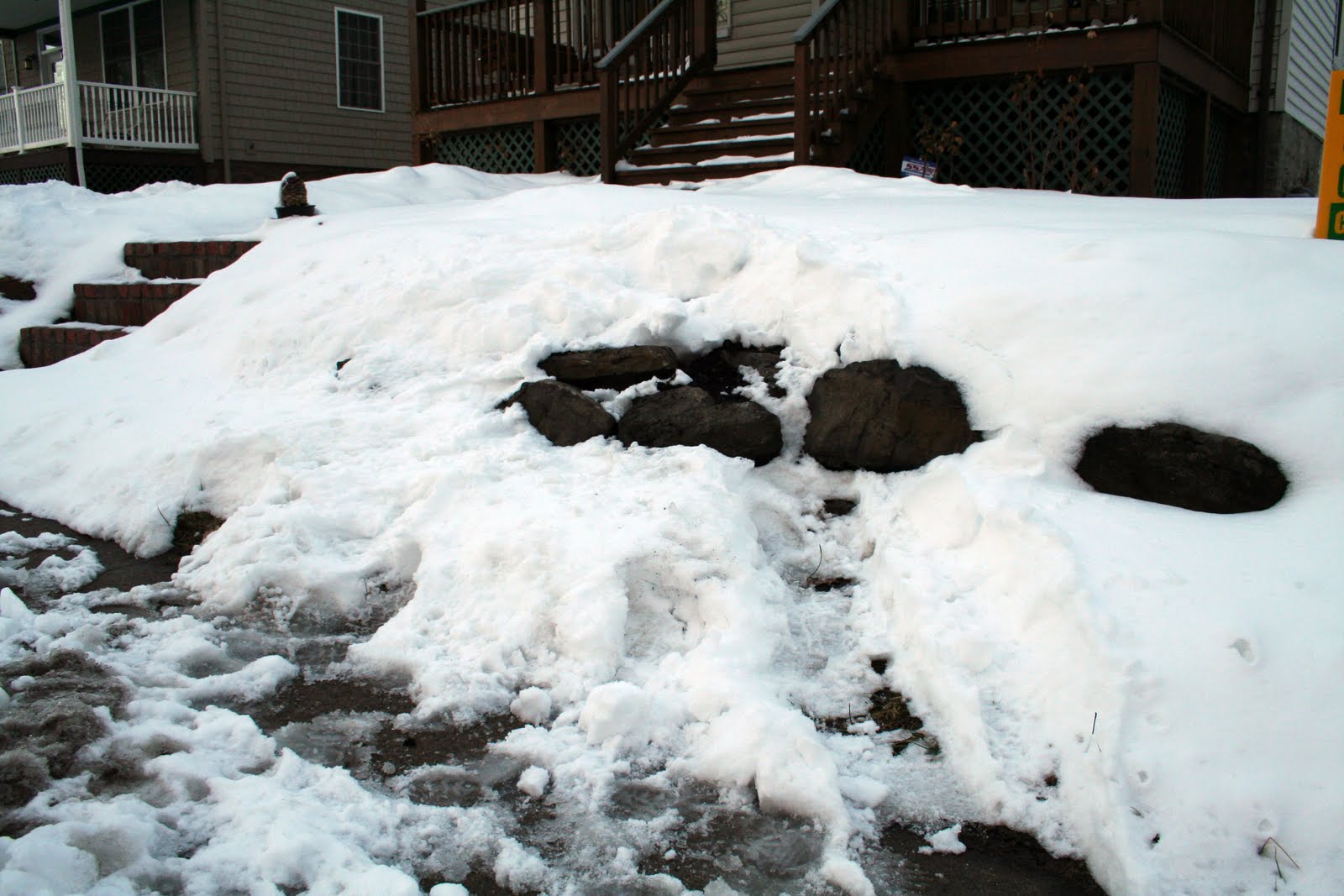 The drunk drivers are the ones who end up in our yards. One even died before we lived here. But every day dozens of cars speed past that park full of kids and through the bend fast enough to bump the curb and squeal tires. The speed limit is 25. A dedicated speed trap would be a good first step, in my eyes.

Cranberry police are investigating after a man crashed his pickup truck into a bank this morning, narrowly missing a toddler inside.

Sgt. Chuck Mascellino said 45-year-old Donald Dunkle was headed east on Freedom Road when he crossed into opposing traffic, crested an embankment and slammed into a PNC branch on the 1300 block at about 9:15 a.m.

A bank employee pushed a 3-year-old out of the path of the truck as it crashed into the building. The employee was struck by flying debris and was checked by medics at the scene, but declined to go to the hospital.

Mr. Dunkle was taken to UPMC Cranberry by ambulance after he appeared “incoherent,” Sgt. Mascellino said, though he suffered no apparent injuries from crashing his truck.

“We’re not sure if its medical or if there’s other contributing factors,” Sgt. Mascellino said.

He said police will determine if Mr. Dunkle will be charged after further investigation.

Meanwhile, police say the lot has had some bad luck recently.

According to police, there was a fourth incident in which a man, suffering from Alzheimer’s, drove across the parking lot, out of control. The only thing that kept him from driving into a building was a cement walkway, which ripped the front axle out of his car upon impact.

Saw an SUV being extricated from a phone pole on the corner @ Doughboy Square today.

If you fail three tests in a month, then wreck a couple weeks later, that to me is a strong indicator that it’s time to hang up the keys.

There is no God-given or Constitutionally protected right to drive a car.

“When he heard something hit his car, he thought it was a deer so he kept driving, he told police.

…Police suspect he actually hit a 17-year-old girl who was found in the road with serious injuries. The girl survived the accident.” I’m trying to figure out how this pole got mowed down. This is at the corner of Perry Hwy and Highland in West View, looking west. Behind me is a very low speed one-way street, where residents 95% of the time have to stop at a red. Coming across Perry (the I-279 Bellevue-WView exit feeds this) one would not go across since it’s one way; everyone turns. Southbound 19 is waaay out of the way. Northbound 19 is both uphill, and at least 10 feet off the path of travel on the inside of a curve. How could anyone hit this pole? The direction of clobber says low-speed one-way, which would only make sense if a car is 2nd in line and clobbered the pole to avoid clobbering the car stopped at the light, which is possible if they’re not paying attention. Also, this is a very new pole, just replaced Fall 2010.

I’d guess somebody in the parking lot to the right knocked it down into the traffic lane. Suppose the maroon car in Street View backed up a little too fast.

But I figure if none of the buildings at that intersection have car-shaped holes in them, the driver who merely plowed into a sign practically deserves a commendation. Or at least some kind of citation….

Maybe now the authorities will do something. An Olive Garden had to close!

Seems like the vehicles most involved in these kinds of incidents are larger, SUV types. Would you agree? Well, I guess morons drive any size vehicle. People should have their licenses suspended for 10 years if this kind of thing happens. The charge: Too stupid/dangerous to drive.

Drunk driver hits couple changing their tire, even though they had blinkers and safety vests on: http://www.post-gazette.com/pg/11364/1200193-100.stm

Not in Pittsburgh, but too good not to post. a car lands on a roof of a house. End the thread right now. Nothing will EVER beat that!!

Santa came in a car this year?