Didn’t want to hijack the other thread…

Looks like I’ll be joining the bike commuter gang (it’s a gang, right?), and I need something to lock up that’s not super flash. Singlespeed maybe? I’ll be going from Oakland to RIDC Park, and know how I can avoid the hills pretty well if needed. Panniers perhaps? I’m not sure, I’ve never commuted, I’m a spandex weekend warrior. Let me know, seasoned veterans!

Woot, another convert! (kidding – you can have multiple bicycling personalities).

How much stuff do you need to carry to work?

If you’re starting now, there are some good threads here about winter riding…keeping the fingers & toes warm & preventing your glasses from fogging up if you’re wearing a balaclava.

It is fun once you get the hang of it + your co workers will think you’re a badass.

I’m new to bike commuting too and loving it so far! I just wish that I wasn’t currently commuting to school in Illinois, so that I’d actually run into your familiar faces from time to time!

I’m personally fond of Stu’s approach, find an old bike and give it some love. I’m a big fan of bar-end shifters now that I’ve gotten used to them on my 520. A singlespeed would be awesome in both simplicity and as a training aid for those weekend rides! If you’re on a budget, you might want to consider something like the cyclocross bike at Nashbar which is a steal at under $700 with 105 components. It seems that most of the intro level cyclocross bikes are geared towards commuting and credit-car-touring so either one of those or maybe a light touring rig? Try to narrow it down by a few things, do you want disc brakes? Do you prefer aluminum over steel? Both of those issues have been discussed pretty thoroughly in recent threads.

Personally, I’d say that panniers are a must. If you are commuting regardless of weather, then fenders too. I think the key is making sure that you buy a bike where those will fit without much hassle. If you don’t want something flashy, I’d stick with the used market or a mail-order company like Nashbar/bikesdirect which usually come without any decals on the frame to begin with. Otherwise, I think that Surly/Salsa/QBP is the best bang for the buck. The REI Novara bikes are a good bang-for-buck choice too.

I like my steel KHS urban Xpress. It is probably a lot heavier than what rice rocket is used to riding, though!

@rr: I think there can be compatibility issues with panniers & disc brakes, so check into that before $$$ing.

Weight is relative. It’s funny how many posts I’ve read on the web about how heavy the Trek 520 is, and yet it’s the lightest in my fleet. LOL

Concerning disc brakes, fortunately most companies are now mounting the calipers within the rear triangle instead of on the outside of the seat-stay… so most racks will work if that is the case (not sure about kick stands though). Even if it is attached to the outer seat stay, there are a good number of options but you are a bit more restricted, so it’s a fair point to raise…

@Pseudacris, that link is super helpful, not sure how I’ve never noticed that. Thanks!

*edit to add* If you want to convert an old bike to single speed you might want to read over this: http://sheldonbrown.com/singlespeed.html

I love my Surly LHT.

The annual REI 20% off everything sale is about to hit.

There’s also much to be said for Craigslist (be sure it’s not stolen) and FreeRide and tending it to become the bike you want.

Any opinions on the BikesDirect CX singlespeed? Has eyelets for fenders and racks. Chainstays are somewhat short, hopefully I’ll have enough heel clearance (or just run front racks only). Should clear up to a 42mm tire.

I’ll probably replace the front fork w/ a disc fork, and grab the (boatanchor) wheels off my 29er…but that adds another $200 or so to the purchase price.

No personal experience with it, but I haven’t heard anything bad about them.

You’ll have to cold set the frame to fit your boatanchors since the uno has a 120mm track O.L.D. spacing. Not to mention, you’d have to redish the wheels on your 29er for a singlespeed set up. Is it worth the effort? There are some decent buys for solid track wheels via handspun.

Oh, my 29er is singlespeed. I was thinking about doing the front only anyways, since the rear doesn’t have disc standoffs. Who uses rear brakes anyways?

@ rice rocket I love disc commuters I don’t know what your price range is but I have been very interested in this bike http://urbanvelo.org/raleigh-roper-disc-brake-steel-cross-bike-review/ it’s even available at REI http://www.rei.com/product/830073/raleigh-roper-bike-2012

Also about only running front brakes: from what I read braking on ice you use your rear brakes so not to loose front traction.

Does Mrs. Marvelous know you are in a gang? Does she also agree that it might be “sweet?”

Just trying to watch out for you…….

Haha, well I’d be keeping the rear too, just as a rim brake, which may lose some effectiveness in the wet.

I think it would be wise to keep it rather cheap, it’s something I’d be locking up and leaving 8 hours a day. That said, talking to some friends, they said it would probably become my most-ridden bike, and that I shouldn’t skimp. Choices choices…

@ricerocket: It may be worth your while to stop by Thick, too. They’ve had a few nice rebuilt commuters come across the feed recently.

There’s something to be said for a $200 commuter in good shape; even after you throw on fenders, racks, panniers, and lights, you’re still under $500.

I’d love to have the Roper, parked right next to a Jamis Bosanova.

Although no disc brakes, I’d get a cyclocross bike from Nashbar, and put the drive train on a different build and then just throw some low end components on the cheap frame for commuting purposes.

I think this would make a great commuter too with a German made aluminum frame and it looks like front and rear eyelets for a rack. Tiagra components and not a terrible price of $925 Focus Mares Ax 3

In the end, however, they all got pushed back on the priority list when I found a USA made 2002 Trek 520 on Craigslist for $400 that has only seen a couple hundred miles of use. I built a Nashbar CX frame for my g/f last year. I wasn’t too happy with the toe overlap, and the lack of clearance for double cranksets (the one pictured rubbed on the chainstays, I had to put a Sora triple on it to clear) but the frame itself was decent otherwise. I did some custom paint for fun. 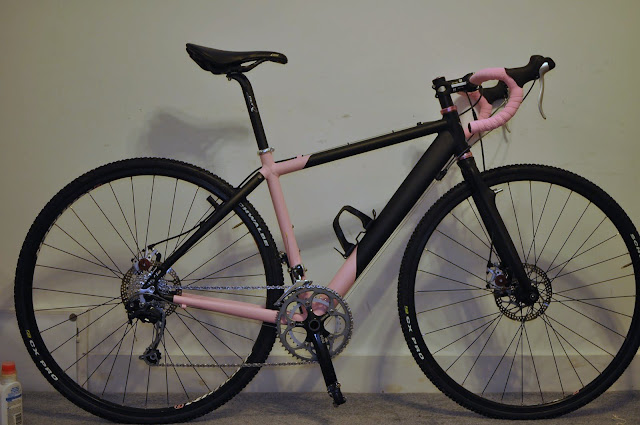 Don’t think I’ll be doing the Nashbar thing again though, just to try something new.

That Jamis looks neat, but I’m probably trying to stay under $800 for now. Does Thick keep their website up to date?

Good to know about the clearance issues, but that custom paint looks great! The pink headset is the icing on the cake!

I’m a big fan of the old Trek steel. That’s about $150 all in, in that pic, CL. I even kept the old inverted tread fat tire on the rear as cost savings, and I kind of dig the “funny car” look. Nice find! It even still has the cable bumper thingies on the top tube.

Nick and I both have the Bikes Direct Dawes Lightning Cross. It’s been upgraded for this year, too, from a steel frame to aluminum. For a bike under $500, they stand up to a TON of abuse.

Kayla, is there room for proper fenders on that bike? I’m vaguely tempted by a few of their offerings, but since any bike would server at least part time as a commuter, I can’t live without my fenders.

With the knobbies that came on it (32c I think) I was able to run a fender in the front but not the back. But it was because my fenders were for 28c and under, not because of the bike. Bigger fenders will fit just fine.

I can’t imagine there would be a lot of theft in an industrial park. Just keep a couple locks there and lock it up really well. As for what kind of bike, buy something you’re going to want to ride. Panniers and fenders are two things I can’t live without now.

Also, the BD bike I have doubles as a mountain bike if you’re stupid enough, a decent (albeit a bit heavy) road bike, and a touring bike (Nick rode his to DC and for Crush the Commonwealth).

@ swalfoort I now know of mr marvelous commuter gang activity and will discipline him after work.

@ rice rocket that bike you built for your gf is really nice, it has the look I’ve been trying to find for a while now.

BT has a review of the Fantom Cross UNO. FYI.

Thanks. I was looking at the print edition, and was too lazy to look it up.

mrs. m, thanks! I had fun building it. If you want a fun tool to play with different paint options, check this out: Serotta Paint Program

That link is to the “First impression” of the Motobecane, the full review will be online eventually. As of right now it is only available in issue 15, which will hit newsstands both paper and electronic Jan 31st.

Subscriber copies are showing up in mailboxes this week.

@ rice rocket I’m sorry I can’t be in your commuter gang anymore I have to be home when the street lights come on.

I saw a Felt Breed come and go in my size in the beautiful baby blue/black combo (not the nasty black/green that is on the 2012 bikes), should’ve snapped it up for $400. There’s also a CAAD 8 cross bike local that would fit me, but the dude wants $800. Mehhh.

I almost bought a Breed from Biketek awhile back, but a test ride confirmed that it was just a tiny bit too big to make it work.

I commute on a Trek Earl and have no complaints. Just throwing the idea out.

Update: So I went a little overboard (okay a lot overboard). My boss gave me the okay to drag my bike into my office, so no need to lock it up to a pole outside.

The CX50 brakes are pretty terrible, it’ll probably be my first upgrade. I bombed around Frick Park for about an hour yesterday, it rides nicely for being aluminum, but that’s probably more the wider tires than the frame material. Still relatively narrow compared to my MTB though, you notice it most when the tires wash out in a hurry on the loosely packed stuff.

And the pedals seem a bit minimalist.

I commute mostly on a CAAD10 and love it, I see no reason why you wouldn’t love that.

Not sure on breaks though, it has what it has. Wheels are next, but then again so might a full carbon bike.

Dan: Haha, yeah. The headtube is a bit tall on it being a cross frameset. I’ll probably go back to my -17 stem instead of the -25 that’s on it now.

OrionZ: I vote wheels! I always love how round tube bikes look with deep wheels. Friend of mine: