On this thread or the board at all? It wouldn’t be on this thread because it isn’t CM. I can’t speak for 412 Flock, but I know they all have board accounts.

But back to CM (Mass, Manners, whatever), I should get busy and plan the 9/25 ride. Choices right now are
A) Try the Halket-Allies-PantherHollow-Greenfield route
B) Make a beeline for the Rankin Bridge and come back in on 837 to the Waterfront

I was thinking Flock should be posted on the board.

IIRC, that is how the Flock first organized. I’ve missed Flock rides that I would have made it to had they been posted here (uh… like the dance ride.)

This Friday, Sept. 25, we will try again with the plan proposed for August. Last chance to cross the Greenfield Bridge!

I don’t care if I get one rider or 41, or ride by myself. Meet at Dippy at 6, and we’ll take a little ride around Oakland and Greenfield. Shouldn’t take more than an hour, so if you have 7:30 plans, you can probably still keep them.

Another Critical Mass of one. As planned, I rode Bellefield, Fifth (including a double left lane change in heavy traffic), Halket, then Blvd of the Allies. I’m amazed how little trouble I had. Right forward lane, left tire track. No horns, no fingers, no close passes, no tailgating. Two blinkies in back, wearing a pink shirt (and a necktie). Nobody gave me any trouble at all.

When will the next critical mass ride occur? I’ve always been a lurker when they were planned, but never actually pulled the trigger on it. If it happens at a good time, I can try to get some people together to bump up the numbers.

Emphasize to all potential riders that it’s a law-abiding ride, but taking the lane, on streets not known for their bike friendliness.

The point is to show how riding legally and visibly — taking the lane — is eminently safe. (Safe is a relative term. Motorists regularly plow into scofflaw helmet-less buildings)

Stu – I meant to make it on Friday. Apologies.

It would be good to pull Pittsburgh CM from it semi-moribund state.

Maybe we should get serious about that idea to ride Rt 51 from Brownsville Road to the West End Circle at 7 a.m.

I’m tempted to cut that short in favor of riding through the Wabash Tunnel, too, but I’d rather climb one mountain than two. There’s just more than a bit of irony that we would encounter the least trouble in the illegal section, and the most trouble in the legal section.

And if we do do the Rt51 ride, it won’t be on a last Friday, but rather when we can get a bunch of people to do the ride together. I’m hoping for at least four, preferably closer to 10. Hell, what am I saying? 50!

I’m thinking we shold save the Rt 51 7 am ride for some specific goal. Like if the idea of having bike infrastructure in the South Hills gains enough stature that there is actually public debate about it.

Parallel thread for the book of faces here.

How about I just say Plan A will be Thursday, October 15. We need a meeting place, and a more definite time. 7:00 seems kinda early, especially if I have to leave at 6 to get there from my place. Maybe gather at 7, try to absitivelyposolutely be there 7:15, briefing of the rules 7:20, roll out at 7:30. That would put us downtown (via West Carson and Smithfield St Bridge) about 8:30. I don’t want to show up at work much later than that.

This is definite. Plan to meet at the McDonalds at 4214 Brownsville Rd between 7 and 7:15. We roll at 7:30. There will be at least two of us. It will be cold; expect 40 degrees at riding time, but dry, so dress appropriately.

I plan to be there!

Four of us rode in from the 51/Brownsville McDonalds. Very little trouble. Lots of sitting still, looking at someone’s taillights. A half hour barely got us to the Liberty Tubes. (That’s where my front camera quit.) The only spot where traffic moved much faster than us was between the Parkway West split and the West End Circle, which is still posted 40, but ambient 55. Opted to use the West End Bridge rather than West Carson St. The tiny bit of one-lane 51 just before the Parkway interchange was of minimal disruption to anyone; our moving minimally slower allowed enough space for only one car to make the merge from the Parkway off-ramp.

Brentwood McD’s to Point State Park, 58 minutes, about half of that time spent with the pedals sitting still — either stopped or coasting.

this was a very pleasant ride, on a great roadway surface. All the drivers played nice. One gentleman stopped next to us took the opportunity to express disagreement with our taking the lane on the West End Bridge – since he pays for it and we don’t – but he was very civil about it. Wrong but quite courteous. Thanks Stu! great ride.

It’s nice to do a ride like this in a group. Too bad there were so many cars in our way on Route 51. They kept our average speed low (10mph) and their exhaust also stank up the valley. If we could replace half of those cars with bicycles, it would make this commute faster and less noxious! 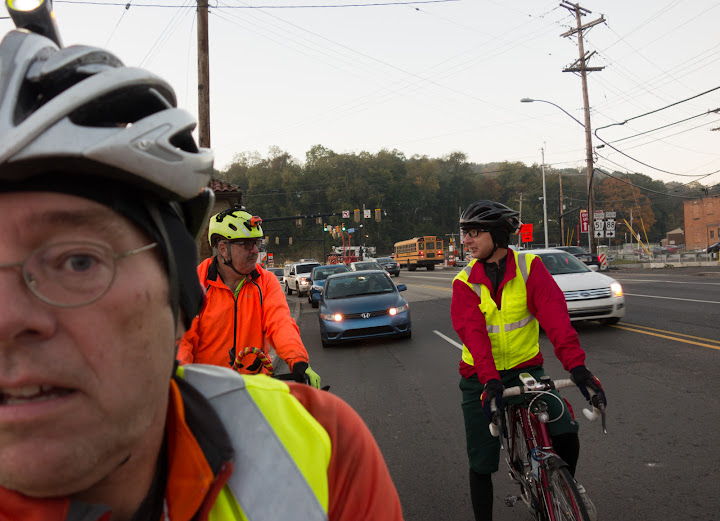 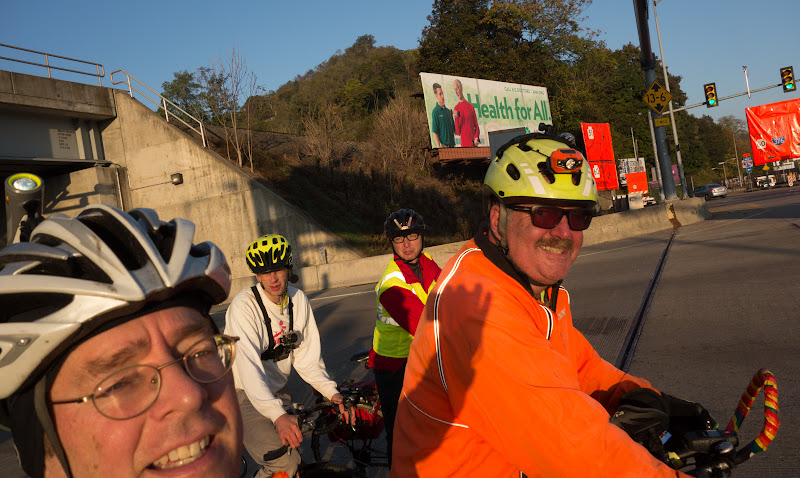 The only halfway difficult part of this ride was the part after Woodruff St. We opted not to deal with Port Authority’s stupid rule about bikes in the tunnel. But the only part of the ride that seemed the slightest bit dicey would have been averted altogether if we’d turned onto Woodruff and ridden the tunnel, which also would have shaved several minutes and a mile or two off the ride.

The main point, though, was proven: It is neither unsafe nor difficult to bike 51 from Brentwood into town, if you don’t mind taking the lane on a four-lane road, which is what you should do anyway.

Right lane, left tire track, cede to nobody, and be visible. It’s really difficult to get into much trouble that way.

It’s amazing how chill this ride was. We didn’t get a single horn honk or any aggressive driver behavior at all.

I suspect that if you did this solo you might encounter some driver issues, but maybe not. I was sure surprised.

I think the group of neon clad riders and this “The only spot where traffic moved much faster than us was between the Parkway West split and the West End Circle, ” is why. I’d love to be proven wrong.

Yes, definitely. You picked a very good day to do this (or maybe a bad day for experiencing the real thing). Traffic was light today, for some strange reason. Yesterday, there were many more cars. It just goes that way sometimes. Some days, traffic is light and you breeze through. Other days, traffic is horrendous, you can’t figure out why, and it takes twice as long to get to work.

The construction and lane closure seems to have slowed things down in that area, with a net positive result. Normally, you have people weaving in and out of lanes, jockeying to get onto the Parkway (left exit), which is often backed up the entire exit ramp and onto 51. Then you have people coming from the right, i.e., Banksville and the Parkway, trying to merge onto 51.

The portion between the Parkway split and the West End Bridge is a high speed area but it also has an extremely wide shoulder where a bicyclist can be out of the traffic lane. On the West End Bridge itself, people start out in the left lane, to get past a few extra cars, but they have to come all the way to the right to get off on Lighthill Street. It can be truly cutthroat at times.

I think if one tried to do this every day and solo, there might be a bit different impression of the road conditions. I’ve seen bicyclists for brief periods, in the past, but their tenure seems to be short. I am happy that you are safe and had a positive experience but 51 is not a pleasant place to ride at all.

Friday, October 30. Dippy at 6. The ride starts at sunset, so this won’t be too long. Maybe head up Craig to Baum to Euclid to Centre to Craig again and return to Dippy. Baum isn’t any worse than any other 4-lane street, AFAIK.

This ride is on, even if I’m the only one on it. Here is the route, less than three miles total, but covering both recent fatalities.

1) The first, of course, is within eyesight of where we start. We will loop around the back of Schenley Plaza first, the better to replicate the path Susan Hicks was taking last Friday.

2) Bellefield to Centre, then up to Allequippa Street, where we turn left to climb up to the VA Hospital. This is where Hank and Christine got mowed down on Monday.

Descend University Drive back down to Bigelow and Forbes, and return to Dippy. I doubt it will take much more than a half hour.

Thank you to @loriflynn and @shooflypie for coming out to join me on this.

As stated, we retraced the final steps/wheels of both incidents. I was back downtown by 7:30.

Stu it was nice meeting you and Lori. I feel so bad because I thought she said her name was Gloria. We were standing along Forbes with noisy traffic, so if Lori reads this I apologize for calling you Gloria instead………….

Any chance of a CM this Friday?

I was not planning one, but as it turns out I am going to be in Pittsburgh.

Last second but:
Critical Mass Ride this evening. Stu and I will be there, hoping for a few more. Meeting around 5:30, leaving around 6 pm. Meeting at Dippy. No plan, just riding around.

Thanks to Mikhail for joining us. Brief recap: Forbes, Morewood, Ellsworth, Shady, Penn all the way to Braddock (passing the site of the fatal wreck a couple nights ago by Lang where a car landed on its side in someone’s front yard), Braddock all the way to Edgewood Towne Center, out the back gate that’s sometimes closed. Then we looked for the end of the Busway Trail at the Swissvale-Edgewood line, but I goofed and we ended up at the Wilkinsburg end of it instead. Then South St in Wilkinsburg to Braddock again, to Kensington, where we at first missed the trail over to Reynolds (hey, it was dark!), then Reynolds to Beechwood to where we parted ways by Bakery Square.

Observation: Pittsburgh is, I’m guessing, the only Critical Mass in the country whose rides start at a ghost bike.

what is the Busway Trail? thanks!

There’s a sidewalk along Edgewood Ave in Swissvale starting at Lacrosse St and running to the south, crossing Braddock Ave and ending around Waverly St. You can bike on Waverly St. past the bus stop and come out onto Braddock Ave (much higher car traffic) near McKim St. Overall, it’s one of the best bike routes from Swissvale/Edgewood/Wilkinsburg/Regent Square to the Rankin Bridge.