How did it turn out?

My favourite images of the ride were taken at the Chambersburg Waffle House. The expressions pretty much sum up the first day. 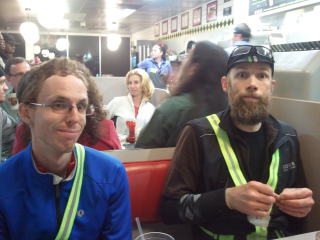 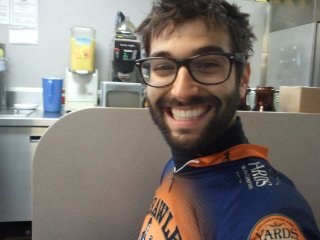 congrats all you guys! Can’t believe I’m jealous of this crazy ride… but I am. Rob Burritos are calling me!!!!

How far is the milage?

@Mick: 2 people under 29. The Brothers Tressler, much like last year, put on a fine performance.

Total mileage is somewhere in the 390-400 range, depending on how far you had to ride at the start and finish.

You guys are awsome! -even those that DNF’d.

Congratulations to everyone who did it!

I only did ~23 extra miles. Though most of it seemed to be up hill.

I ate it on the SRT. There was a steel receiver for a vertical motor vehicle barrier that had been removed. It was right in the middle of the path about 2-3in out of the ground. I was just cruising in the dark and bam! I was in front of my bike on the ground (still clipped in) with the contents of my handlebar bag everywhere.

I also lost all of the bearings in my right pedal with 150 miles to go and got sick halfway through Saturday and vomited three times on the side of the road/trail.

After leaving Pittsburgh, I didn’t have one negative experience with a driver until Lancaster. The whole way through Lancaster I had kids yelling or revving their engines at me, someone threw a cup of ice at me, and a ton of people brushing by way to close. Once out of Lancaster it was great, even in Philly. I had a couple pedicab drivers help me with directions on Main St. and even the drunk kids bar hopping were nice and wanted to know how many miles I had rode that day (which was a big surprise).

All in all, it was an absolutely horrible experience, but I’ll probably do it next year. Hopefully I’ll be in better shape going in.

Also, I’m kind of upset that I didn’t get food at Roburritos. I was riding with Brian, dropped off there because a bunch of people told me I had to eat there, and they had a 30min wait for food.

Nick, S. and I thought your facebook status updates read a lot like messages from the Oregon trail. We were dreading the update where we would be informed you died of dysentery.

@ nick D. I also lost all of the bearings in my right pedal with 150 miles to go and got sick halfway through Saturday and vomited three times on the side of the road/trail.

Nick really, REALLY knows how to have a good time!

OK, so how do you keep rolling when you pick up a stick that eats your derailleur or your pedal dies? What I do is limp to the nearest PAT bus, rack it and go home. Clearly that won’t work when I’m 82 miles from nothing.

Can’t edit my previous post, had some updates, added a few riders tot he finishers and DNFers:

Did any women do this? Have women done this in years past? I would love to if it doesn’t fall on the weekend of the NYC 5 boro ride

Just a repost from my “miscellaneous ramblings” over at the CTC blog:

While I am at it, here are some more random observations from the route:

rednecks in Somerset and Bedford (aka rude drivers).

Friday night at the dirt track races in Bedford.

some big a** hydraulics on the Yough’ and the Casselman

seeing breath while climbing on route 31

how warm inside was the general store in Rockwood!

at the end of the abandoned TPK, did y’all know you can turn LEFT behind the grass/dirt mounds (where the old gas station used to be) and take a paved access road to Pump Station Road? (thanks, SS Ted from ’09!)

Turkey Hunters at Sheetz at 430am

The ATROCIOUS bathroom at same Turkey Hill in York! (did someone poo in the urinal?)

LOTS! of Harley’s out on Saturday.

Have the Amish given up on bicycles and moved exclusively to “kick” scooters?

a very, shall I say, “helpful” art gallery owner adjacent to the closed bridge on route 462 that was more than willing to offer help to young cycling men find the detour and perhaps come in for a rest.

on the snake-like route (eby road/weavertown road), seeing an 18 wheeler flatbed trailer full of amish-built kids playhouses almost tip over and crush us on a 90 degree turn, one lane road

Poorly/confusingly marked “route s” on Kimberton/Coldstream road and before VF Park as well.

Phillies fans at the Sheetz in morgantown

Everybody in Philly ‘burbs is a Cat1 wannabe on a carbon TT frame with $2500 carbon wheels…riding on a recreational walk/bike trail -!! ..on a crowded saturday afternoon.

did anyone hit South Street for beers after (we went to Copacabana)? …and being in the bar when the Flyers lost.

fitting three bikes, three riders, wheels, gear into a single taxi cab from old city to the Airport car rental office. (I have a pic and yes, there was a bike in the front seat with a rider and the cabbie).

willie: The Amish have not given up on bicycles, but they are not a monolithic denomination. Each congregation has its own rules. I think the preference for kick scooters over bicycles turns on the mechanical advantage of the latter — and possibly the fact that you can ride one from Pittsburgh to Philadelphia essentially nonstop.

I have heard TT riders on trails referred to as “pathletes”.

No drama or excitement to report here. It was just really satisfying to finish in 33:24 after DNFing last year, and barely dragging my ass up to the liberty bell after 69 hours in 2009. It was definitely the longest and hardest I’ve ever been pushed, and I’m still a bit amazed that I managed to ride onward after only about an hour of sleep in Chambersburg. Dan, Lane, and Eric were an excellent group to ride with.

Greyhound can die in flames, though. The cost for a ticket to PGH went up from 39 to 59, and there is now a $30 oversize luggage handing fee to pack a bike. I’m glad I didn’t hang out at the bell for too long, because I got to the shipping counter about twenty minutes before they closed. The westbound bus was already pretty full when I got on, so the only seat I could find was one in the second to back row, right above the engine, in the aisle across from the bathroom, that didn’t recline. For that cost, I would rather just hire one of my parents to come and get me.

Oh, and I was thinking the exact same thing about the kitted-out guys on the TT bikes riding the river trail.

wow, thats’ expensive. A hertz econo-car was only $80 from philly to pit.

assuming you are one of these guys. I finished in 35:52 and trying to figure whom yinz/yous guys are.

what bikes were you riding?

I was on the minimally packed orange Waterford road bike.

“Poorly/confusingly marked “route s” on Kimberton/Coldstream road and before VF Park as well.”

I think the S route is marked OK. There was a re-routing due to a bridge closure on Whitehorse Road, but the map posted shows the organizers worked around it. (The bridge reopened last week.)

I also broke a bottle cage.

There was a point after finding Brian (from Jersey) heading towards Valley Forge, that we found two roads at an intersection, both with Bicycle S Route East signs.

These recaps are a blast to read, thanks for posting them. Congratulations to all of the Commonwealth Crushers.

“There was a point after finding Brian (from Jersey) heading towards Valley Forge, that we found two roads at an intersection, bother with Bicycle S Route East signs.”

Was it at an intersection with Whitehorse Road? Right was the S route, left was the detour during bridge reconstruction. Left takes you to Rt. 23, which leads through Phoenixville and into Valley Forge. Rt 23 is ridable but the traffic is heavy.

Did anyone else get confused by the route signs with the mushrooms in place of the “S”? I saw them sometime after Somerset. Dean and I followed these signs by mistake and ended up having to backtrack several miles to get back on the “S” route. I checked the PennDot Bike route site, and I see no mention of this route – so I’m still wondering what it was for, and where it led…

@thehistorian: honestly, I have no clue. I don’t remember too much detail from the entire ride.

there’s bikepa routes with a dude whitewater rafting and i think one with george washington’s profile in addition to the mushroom one. i’ve never found any more info or maps about these. i do know that the area with the mushroom route they grow a lot of mushrooms. maybe its a tour of mushroom farms?

Nick, I understand. Most of the riders were probably very sleep deprived by the time you came through here.

Yeah, the mushroom signs almost caught me in Somerset. Then by a small miracle I saw the Sheetz and a Bike Route S sign and didn’t make a wrong turn. Silly mushrooms!

The mushroom signs got me in Somerset. Luckily, when I realized it, I thought to ask for directions to Sheetz to get back en route.

Thanks again to everyone that offered help and suggestions here. You helped make this novice’s first stab at CtC successful. Here’s a report –

Great write-up oswald. I love reading about your journeys and adventures, you make CtC sound almost doable, ALMOST! I hope you can make it back to the ‘Burgh again for a more leisurely ride.

So here is my report:

Got dropped off at the Point in a piss storm after driving about downtown finding it. Met up with the others and departed in the drizzle for a rather spirited “neutral roll-out”. Glad I hung on as I wouldn’t have found the trail in McKeesport without difficulty.

Rode along with Eric, Chris and Max as they were easing into their pace before I fell back into my “start slow and taper back” mode. Stopped in West Newton to grab some snack time from my pack and Adam rode past. Had a small twig jump up into my chain that required attention. Proved to be an omen.

Caught up to Adam several miles later as he was similarly eating a snack. We continued along together talking at a leisurely pace. Then about three miles or so east of Connellsville a larger stick get itself caught up in my chain and wrapped itself & my rear derailleur around the my cassette-bending the hanger into contact with the small cog.

Collecting myself after the 40+ foot skidding stop Adam and I surveyed the damage. An hour or so later I was single speeding my way back to Connellsville. I called my wife for a bail-out ride home and one of the wrenches there (I wish I could recall his name-great guy) walked up after looking at it and asked what I wanted him to do. Puzzled, I mumbled something about getting a rode home to get it looked at and he said, “I can fix it right now.”

An hour later it would be ready, but he didn’t have a short cage der. in stock. I was west-bound by car soon thereafter.

@reddan – link not showing up

Meh. And I write code for a living…thanks for the heads-up.

Of course, come to think of it, that could have been the board’s way of telling people not to waste their time…

A strict “anti-time-wasting” policy could lead to the demise of the board, anyhow.