Cycling to the Airport from Downtown

Anyone have tips on best route to ride to the airport from downtown?

It looks like going up Stueben Street out of the West End, but then I get confused about the best way to get out to the Montour Trail and the Airport Connection from there.

It seems like this should have been covered in previous posts, but I can’t find anything specifically on this with the search function, so excuse me if this is a duplicate.

I’d recommend North Shore of the Ohio Trail->McClure->Termon or California Ave to get to the McKees Rocks Bridge, then 51 to Neville Island, and over to Mile 0 of the Montour in Coraopolis.

I would follow Stueben/Rt 60 all the way to Beaver Grade Road, then get on Old Beaver grade road, (you’ll see the Brother’s Grimm bar) which ends at the Montour Trail. Follow the trail west from that point to head towards the Airport. FYI, the trail on the airport property was pretty rough the last time I rode it. It was pretty slow going on my road bike, I’d take a bike with bigger tires if you can.

@rbhays .. thanks! How is Stueben/Rt 60 for biking on that section? It looks like a fast-busy road.

I’ll be doing this probably around 9am.. and around 6pm on the way back.

I made that blog post in hopes of people finding it.

Garmin map. – Check out the shortcut to avoid busy section of Noblestown (where 50 goes left we go straight)

I think the way through settlers cabin is the safest. Thats the northern
part of this loop.

I rode out to the airport with dan, and I found that I like the shoulder on neville island better than noblestown. I have ridden both of those ways. Neville island to coraopolis is also flatter, which may make hauling luggage more pleasant. Mckees rocks bridge kinda sucks, but you are going downhill and can easily go >30mph

At the moment I’m going to go with what Dan said.
Steuben St/Steubenville Pike/Rt 60 is not for the timid, I can’t recommend it.

Also, don’t forget, the 28X has a bike rack. So you’ll be OK in case you decide you don’t want to ride in the rain or something like that.

My method is similar, but might be a couple miles shorter.
* Cross the Allegheny
* North Shore Trail to just before/after the jail
* Wiggle back over to Eckert
* L McClure
* L Antrim (short, steep hill)
* R Fleming, to the end (long, not as steep hill)
* L Termon
* Cross the McKees Rocks Bridge
* Bend right onto 51 north
* L Tunnel Way, go through tunnel, continue to end
* R Broadway, continue to end
* R Pine Hollow Road (a lot of traffic, but decent shoulder)
* L Fairhaven (about a half mile of a moderate hill)
* R Clever; you’re on this for a couple of miles
* Joins Beaver Grade Road at the base of the hill after crossing Silver Lane (which has a traffic light)
* A quick right-then-left at Old Beaver Grade Road
* L onto Montour Trail. Note the water fountain here.

Follow earlier instructions for getting from the Montour Trail to the airport spur.

I did this ride on Wednesday and I will be coming back today.

I used the Downtown -> Carnegie -> Settlers Cabin Park route. I thought it was awesome.

There are some really pretty sections, especially on the montour trail and coming down into the airport.

It took me under three hours with a bit of a load (from squirrel hill).. if anyone is trying to time it. My route said 29 miles.

There is “overnight bike parking” in the parking garage of the airport. You actually wheel your bike down some of the moving walks, which is funny.

Obviously, this doesn’t make sense unless you are really packing light, but I like knowing that is an option now.

Thanks for the tips, ya’ll.

Next time you bike to the airport, keep this map in mind that shows where the gas wells and fracking are, underground: 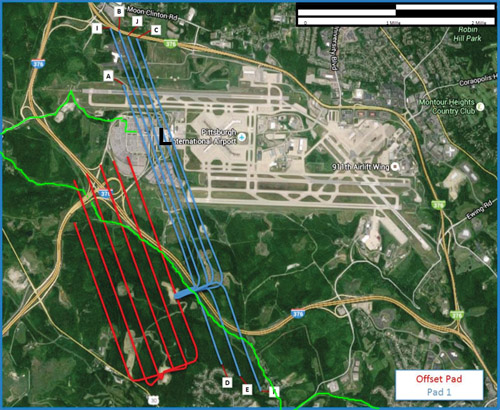 Here’s the route I use on the way back from the airport:

From here one can either take the northern route, via McKees Rocks Bridge to the North Shore Trail, or a southern route: McKees Rocks Bridge -> take right onto Helen Street (in McKees Rocks Bottoms, before going over the river) -> at end of Helen Street, make a left onto Robb Street and then an immediate right under the underpass/tunnel onto River Ave -> at end of River, take left on W Carson, over the bridge, and onto newish sidewalk. Take sidewalk until busway ramp, and cross over to temporary sidewalk. Take temp sidewalk until end of construction site by West End Circle. Stay left to go on the Circle underpass and under the West End Bridge. Take W Carson sidewalk until Station Square trail. Take Smithfield Street Bridge to downtown.

Simon, where is the overnight (covered) bike parking? thanks!

So let me see if I got this right.

If I want to bike up there I should have a good downhill bike?

If the plane I’m on is taking off or landing on 10L/28R, there is a finite probability that the runway will disintegrate under its wheels?

@Vannevar
For the overnight parking, there are signs once you get to the terminal. It is in the parking garage for short term parking.

Also I hear Neville Island now has bike lanes, so that is probably an even better option than it was.