Cyclists' use of Liberty Ave

Within the past year, I noticed a sign posted at the bottom of the 28th St bridge : “BIKES USE PENN AVE”

Now, they’ve placed a sign at the corner of 16th and Liberty that says “BIKES WRONG WAY” as you approach Liberty (thanks to Joyce for pointing this out)

All the “Official” bike route signs point us to use Smallman to go East from Downtown. This is my least favorite of all my options to get home. If I COULD pedal a a decent speed, I’d opt to use Liberty and I should have the choice. Legally, I’m within my rights to do so.

Is this a precursor to pulling cyclists over and citing them for using Liberty in the Strip?

Excuse my language, but this is bullshit. Total bullshit.

Bikes are street legal on any Street that is a non controlled access highway. So they can’t pull bikes over for using liberty ave.

You hit the mail on the head. They’re trying to route bikes down smallman.

This sounds like a good issue to take up with Kristin Saunders, our bike/ped coordinator.
I saw an angry “bicycles don’t belong on Liberty in the Strip, they belong on Penn” comment on a news story a week or two ago. Perhaps this misleading “BIKES WRONG WAY” sign contributed to the confusion.

“Bikes are street legal on any Street that is a non controlled access highway.”

Unless a sign says otherwise. Title 75 section 6109 says local authorities have many powers, among them “Prohibiting or regulating the use of designated streets by any class or kind of traffic.” These are considered “reasonable exercises of police power”. I expect that’s why all non-motorized vehicles can be prohibited from our various tunnels.

This may be an attempt to advise novice riders on the safest route for them, but if it can be interpreted as a prohibition on all cyclists, then the wording needs to be fixed.

Different part of :Liberty and different time of day, but when there are red lights on liberty, its easy for me to avoid traffic.

In Bloomfield, at midnight on a Friday, when every last driver is dead drunk, there are blinking yellow lights on Liberty. This means the drunkards can careen up the street 20 mph over the speed limit at random, instead of being in traffic-light-regulated boluses. Ugh. That isn’t how I want to die.

There is no functional difference between Liberty between 11th and 33rd, and Perry Highway in Ross and McCandless between Three Degree Road and Cumberland Road. Four 12-foot lanes, posted 35, lots of traffic lights and cross traffic. Riding this type of road is neither difficult nor particularly dangerous. Take the lane, be visible (lights, light colored clothing), signal your intentions. I do this Every. Damned. Day.

This will be fought.

There are lots of access points to that stretch of liberty, most without signage. And I don’t think that police resources are goi g to be used to patrol for bikes. I’d carry-on.

What’s infuriating about this is that during rush hour Stallman is considerably more dangerous than Liberty.  I’ve been commuting in rush hour up and down Liberty for about five years and never had a problem.  Since there are two lanes and, for the most part, nobody’s turning, it’s super easy for for folks to just zip right around you.  Take the lane; wear your blinky; signal conspicuously; no problem.  And about half the time I’m behind a bus, so nobody wants to drive in the right-hand lane anyway.  I’m happy and the drivers (except for the occasional jerk who’s never going to be happy as long as bikes are on the road at all) are happy.

I quit commuting down Stallman because it’s super hard for folks to pass you safely, people buzz by you way too close and you get a lot of idiots yelling at you for being in the way.  And you are in their way, not because you’re doing anything wrong but because the road is totally unsuitable.    Plus people turn at every cross street so I’ve gotten hit (fortunately gently) a couple times by people turning with no blinker without paying attention.  Also it’s inadequately maintained and rarely plowed or salted effectively in the winter.  It’s just straight up a terrible route to ride.

The other problem is the “bikes wrong way” sign contributes to the existing confusion about where cyclists are legally permitted.  It’s bad enough that some people think you’re required to ride on the sidewalk, or prohibited from riding on any road without a bike lane, or obligated to ride in the parking lane when there’s space.  Right now the standard’s at least consistent in that bikes are allowed anywhere cars are, except for super obvious exceptions like the Interstate or tunnels.  If you start making some roads “no bike zones” you’re confusing cyclists about where they’re allowed to be and reinforcing all the ignorant drivers who believe roads are for cars by default.

Your whole post was my exact thoughts for three years of taking Liberty. I found it rather easy. If traffic is heavier than it was easy to keep up with the cars ahead of me as it was moving slower. When traffic was lighter and faster then switching the lane is not a problem to pass me completely in the left lane.

With that said, this is where my third accident has happened with a impatient sociopath brake checking me after passing me within inches because I was in the lane. Since then I have been taking Smallman outbound and I don’t like it. All the stop signs, I get buzzed closer, I just find Smallman more annoying. Once I get a road bike back, if I ever do, I am going back onto Liberty again.

So, those are not standard signs, and it’s a bit of a mystery as to how they got there. looking into it 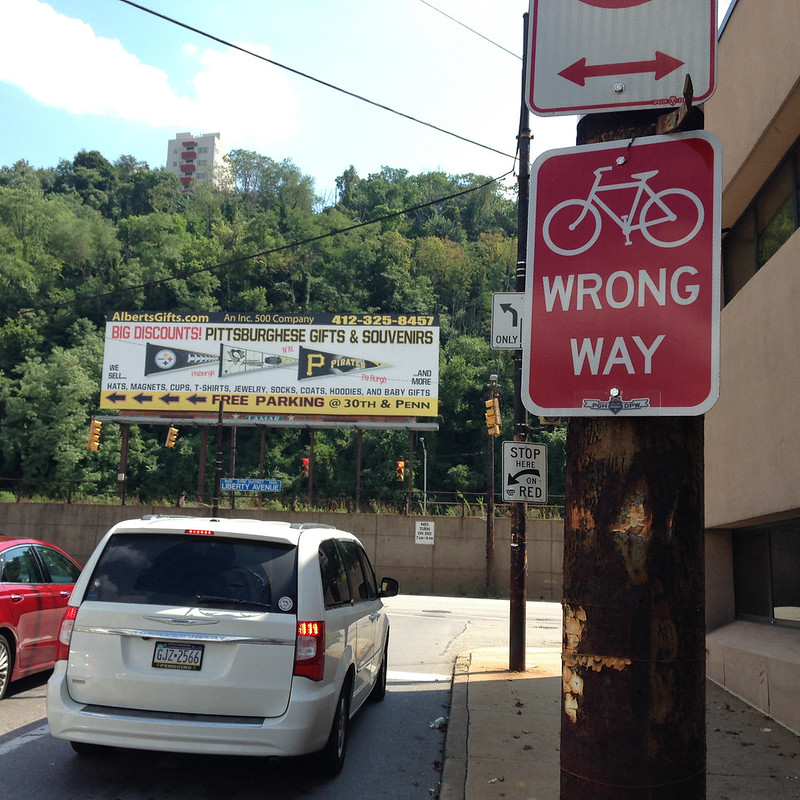 That looks like 16th St looking south towards Liberty. Is there one on Liberty itself? Is it on the sidewalk beyond Spring Way, on the Strip side, where it might make a scrap of sense?

But it does say “PGH DPW” at the bottom, which makes me think it had some stamp of officialdom in its placement. Looking at StreetView, images from July 2016, it isn’t there.

That one at 16th is right after the somewhat confusing Spring Way signage, right?

As long as the signs are advisory and not regulatory, I think some of this anger is a bit misplaced.

Remember, they aren’t necessarily directing you, specifically, but cyclists of all confidence and ability levels.  In that context, there’s simply no manner that Liberty Ave – a 4-lane arterial of less than 40′ width with the highest vehicle volumes and running speeds of any parallel route through the Strip – is the best route for all but the most confident and capable.  40mph and above is the death zone, and I don’t ride fast enough to keep less than a 20 mph differential between my speed and most vehicle speeds.  That’s an *extremely* dangerous combination, whether you individually are confident or not.

As someone who’s cycled some sketchy streets in other cities only to find out later there was a less stressful parallel route, I don’t mind this sort of signage in this location.

Pretty sure white-on-red is regulatory. That is the same setup as you would see if you tried to drive up an off-ramp to an expressway.

Anyway, confident or not, you can legally bike anywhere it explicitly says you can’t. I bike on McKnight, posted 40. I even bike on the part of McKnight posted 50, just that I rarely have need to. If this really is an official sign, it’s pretty darn stinky of the city to post such a sign without letting someone in the bike community know.

Stu: I think you have a typo there: “you can legally bike anywhere it explicitly says you can’t”.

Stupid message board editing. Sometimes I catch them in one try, sometimes I don’t. Usually takes two or three tries to get it right. Right now, if I don’t get it exactly right on the first try, it’s cemented in place that way.

i have found two other copies of this city “Bikes: Wrong Way” sign.

One is, or at least was, on Schenley Drive near the Fountain, just past where that section of separated bike lane used to end.  Notably, it was not afaik removed or relocated after the bike lane was extended to Bigelow Blvd. God, what a mess.

The pictured sign (“bike symbol” WRONG WAY) is an official regulatory sign…..BUT…..I don’t believe it is used as intended by the MUTCD. It is a R5-1b sign and the only commentary that the MUTCD provides is for its use to prohibit riding an the wrong side of the road/street. It also says that the R9-3cP sign, a black on white plaque sign (RIDE WITH TRAFFIC) may be mounted below it.

Hopefully, it was not installed under the direction of a traffic engineer. That would be very, very embarrassing for that person.

If the intent of the sign is truly to prohibit bicycles on that particular portion of the street then I believe the correct sign would be the more common R5-6 sign (black “bicycle symbol” w/ red circle+slash on a white background). As Steven posted above, it is possible for a municipality to prohibit bicycles, or baby strollers, on a street or streets, however, I believe the municipality would need to enact an ordinance to that effect, just as they need to do for every stop sign in order to make it legal and enforceable.

As for the “PGH DPW” at the bottom of the sign, I believe that various sign shops are certified by PennDOT to make signs that are compliant with PennDOT’s (and the MUTCD’s) requirements. But just because a sign has been manufactured by an “official” shop doesn’t make the installation “official”.

Also gives no direction how to go north to liberty avenue. Only tells you to go east or west on Penn. Which makes zero sense.  And is there a sign from the other side (coming from liberty Ave?).  Or from the alley?  Signs are so inconsistent that unless a cop sees you turn directly in front of the sign you can think of another 4+ ways of getting there by not seeing a sign.

And ain’t no cop going to waste their time monitoring bicyclists.

So I am gonna get shit from drivers when I take 31st to liberty because it is the safest way to go? Seriously, how the fuck does this shit happen?

I ran video yesterday on my way home. From outbound Penn Ave lane at 16th, once I turned right into the curb lane on 16th facing Liberty, there is a blue sign pointing cyclists down Spring Way, and the red bike sign one pole beyond that on 16th.

Once on Spring, additional signs direct cyclists left onto 17th, across Penn, then onto outbound Smallman. Even this is troublesome. I find the crossing of Penn on 17th difficult, the bit of wide outbound Smallman up to 21st too wide, with a lot of fast passing traffic, and a lot of cars backing out. Then the corner at 21st is the site of several fatalities over the years.

If I go Spring, I stay on it to 22nd, then cross Penn at the light. Even with crossing five streets on Spring, it still seems safer that way, and the sight lines at 22nd/Smallman are pretty good.