I held my helmet cam in one hand and took a ride out to the end, and back, around 9:30 this morning.

I had a bunch of thoughts run through my head as I made the trip, but I’ll have to write it down later.

Letter to the editor today saying basically:
I ride a bike and don’t think we need bike lanes on the bridges. Pedestrians and bikes can share the sidewalk without conflicts.

I’ve never used the sidewalks on the sisters bridges. But it seems reasonable. (I use the pedestrian walk on Ft. Duquesne, and sometimes Smithfield and 16th. Not to mention HMB.) It should be possible to accommodate both, especially if the walks are one way on either side, maybe with a line. And those of us who don’t mind, just mix it up with the cars; we’re used to it.

Remember, it’s not about beating down the car people (however satisfying that would feel). It’s about creating usable transportation options for a wide variety of riders.

“Fitzgerald also announced that permanent bike lanes will be installed on the Roberto Clemente Bridge
(Sixth Street) by October 30th. Two exclusive bike lanes, one in each direction, will consist of a 5’ wide lane with a 3’ buffer”

I was riding downtown this weekend. I didn’t see any bike lanes on the Clemente bridge. I wonder when this will happen.

@benzo, the county had been doing some welding repair work on the 6th St bridge two weeks ago. They were taking up an entire lane to do this. Don’t know if they are done, but this could be the reason for the delay. Also, the expansion joint on the north side of the bridge, particularly on the northbound lane, is ROUGH. Hopefully they’ll work on it before installing the lanes.

Are these simply painted-on lanes, or will they have bollards as well?

“Also, the expansion joint on the north side of the bridge, particularly on the northbound lane, is ROUGH.”

This.
I have to remember to get in the left lane before the joint because it’s really dangerous in the right lane.
Before I learned to switch lanes, I’ve thought “Oh God, I’m gonna bite it!” when going over that right lane joint.

That 6StBr rough spot has been there a while. I remember encountering @swalfoort during the G-20 event in Sept 2009, who had flatted at that very spot. Five years! …assuming it’s the same problem. Which it might very well be.

Outbound, I’m usually on 7th or 9th, rarely 6th, so more by luck than planning or experience, I haven’t encountered this very often.

this has apparently been delayed until mid november. last i saw, they have plans to cover the expansion gap. this will not have bollards

Thanks for the update Erok. Covering the expansion gap would be great as well. I’d rather wait to have it done right.

Any update on this? Guess it has been postponed until it warms up a bit…

Looking forward to these bike lanes on bridges. Hopefully we’ll see it sometime soon as construction season winds up.

I was just wondering if this was ever going to happen.

In the Trib today: Clemente Bridge to close to vehicles Tuesday [Mar 24]

The Robert [sic] Clemente Bridge in Pittsburgh will be closed to vehicles for two-and-a-half weeks beginning Tuesday as Allegheny County crews install new bike lanes and repair the drainage system and bridge deck.…

This stirred up a shit storm on WPXI’s FB page with our local intellectuals that comment on their FB page.

The downstream sidewalk on the 6th/Clemente Bridge was closed when I went through there around 9:30 a.m., though the upstream side was open.

The markings on the http://pic.twitter.com/0ydL7p9PxL Clemente Bridge look like a nice appeal to the non bikers

I cannot express how much I love the Clemente bike stencil. It is just busting my heart with joy.

So much awesome here! 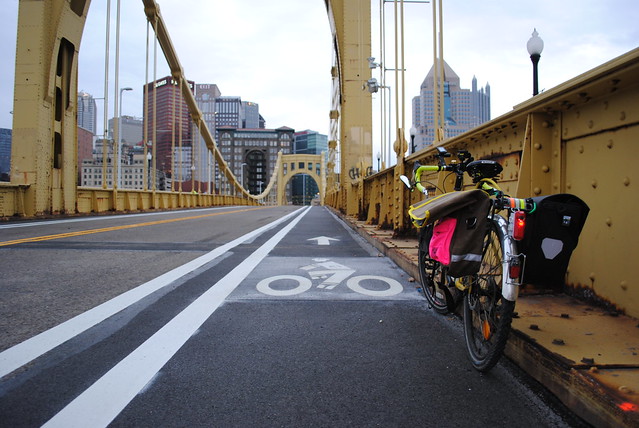 I also took a still across it this afternoon. I love it so much.

Love that the video is taken at a totally nondescript time, in the rain, and there’s a cyclist using the bike lane in the opposite direction at the one minute mark.

Can wait to ride it.

Are they going to put a box in at 6th and penn? If you’re going toward downtown, it would be tricky to get out of the bike lane and turn left to go outbound on Penn if there is a lot if traffic.

Will there be bollards installed on the Clemente Bridge?

Looks like they may have left space for bollard installation? Similar design to the lanes on Negley Run Boulevard.

You will not be able to unsee this: an Instagram commenter said that the baseball sock/ankle/foot portions of the stencils look like Boba Fett.
Boba feet.

If I recall correctly, they will not be installing bollards. They just have that buffer between the bike lane and the main lane. Installing bollards would probably be somewhat of an issue with all the pedestrian traffic that this bridge gets during gamedays and other events.

Also, the Steel City Showdown uses this bridge as part of their circuit and the bollards would have to be removed for safety. One only has to flash back to Monday to a pro bike race in the Basque Country to see why having objects like these during a race is a bad idea.

According to (“http://wesa.fm/post/clemente-bridge-closing-tuesday-will-reopen-new-bike-lanes) this article, they will be installing bollards on the bridge.

Bike lanes on the bridge are almost ready. Crews were finishing putting up bollards and final touch ups. The bridge is looking’ good!

Also, the bike lane on inbound 6th St, from Fort Duquesne Blvd to Penn, is in. Outbound, there’s sharrows. We’ll see if delivery drivers respect the numerous “No parking” signs on the inbound lane. They never have before. There’s also no turning box at 6th and Penn as of this morning. However, the bike lane has no bollards so it’s easy to take the lane to turn onto outbound Penn.

Just as I thought, I just saw 5 or so cars parked on the 6th St bike lane. They’re probably the usual suspects…

So anyway, I crossed the 9th St Bridge earlier today.
Car speeds were way over 25mph.
Bike lanes are nice and all.
But how about simply enforcing the existing speed laws?
Am I missing something here? 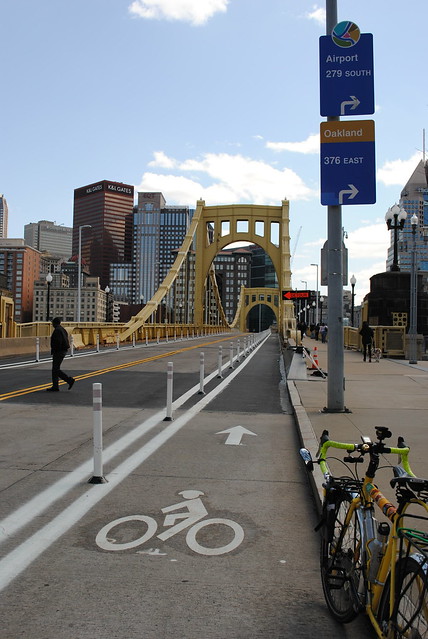 so, the operating rule currently is, how do we install a bike lane where none is needed while simultaneously making the road less safe? oof.
too bad the stencil is restricted to the bridge proper.

Went on a bike ride through downtown today, got a chance to go over the new Clemente bridge bike lanes. Firstly, can I sue they are absolutely wonderful. However the new bike lane on six avenue is clogged with parked cars. Oh, and I almost got hit by a police car failing to yield.

I used the southbound bike lane on, I think, 9th Street, one day last week. I know I used the one on 6th the day I took the video, but I don’t think it was really ready yet.

For me, the jury is still out.

I have mixed feelings about the bollards, I test rode those lanes yesterday on a ride. For one thing, I love it when the bridge is completely closed to cars and converted to a pedestrian festival zone. The rubber duck party on the bridge 2 years ago was fab. I may toodle over there today for opening day just to see how that works. Hopefully the bollards are spaced at some rational “booth” dimension.
Also, when the bridge is closed to cars and is over-run with pedestrians please for Roberto’s sake don’t whine about people in the bike lanes. Closing roads to cars for people to use is the best possible thing. We have hundreds of bridges around here, find another one if it bothers you.

Here’s another PG Photo of the Day: