A rock slide occurred sometime on January 20, 2013 and has blocked a 100 foot section of the towpath east of the Paw Paw Tunnel. The Paw Paw Tunnel and this section of towpath are currently closed and will remain so until a full assessment of the area can be made to safely conduct repairs. A detour route has been established on the Paw Paw Tunnel Hill trail. For additional information, call the Cumberland Visitor Center at (301) 722-8226.

This may mean that there will be a closure of this section of trail, including the paw paw tunnel, possibly extending in to the summer or later depending on when they do an assessment and what they find.

The detour around this is via the paw paw tunnel hill trail, which is normally closed to cyclists. I mapped the detour, and the elevation change doesn’t look too bad (about 375ft, 1 1/4 miles long) but I’m not sure what the path is like.

Here’s the detour on ridewithgps:
http://ridewithgps.com/routes/2164828

The Park Service was originally projecting that the detour would be in place for at least the rest of 2013, but this announcement has much happier news:

Paw Paw Tunnel, MD – Chesapeake & Ohio Canal National Historical Park Superintended Kevin Brandt announced that earlier today park crews began clearing stone debris off of the canal towpath just downstream of the Paw Paw Tunnel. This work follows a significant rockslide near towpath mile 155 in January 2013. Due to concerns related to the potential threat for additional rockslides, park work crews and visitors have been prohibited from entering the slide area. Park visitors have been detoured over the mountain along Tunnel Hill Trail.

Work on clearing the slide was delayed until a thorough geotechnical analysis could be accomplished to ensure that park workers could clear the debris safely and determine if any stabilization work was needed. This analysis was conducted last week and made possible by a donation from the Allegheny Trail Alliance. “There was an immediate need to take action,” Linda McKenna Boxx, Allegheny Trail Alliance president and C&O Canal Trust Advisory Board member, stated. “We dedicate proceeds from our publication TrailBook to address trail maintenance and were happy to help solve this problem.” TrailBook is an annual guidebook that covers both the C&O Canal and the Great Allegheny Passage.

The Allegheny Trail Alliance is a coalition of seven trail organizations in southwestern Pennsylvania and western Maryland, building the Great Allegheny Passage (GAP). The GAP is now connected to the 184.5 mile C & O Canal Towpath in Cumberland and provides a non-motorized, nearly level trail system between Washington, DC and Homestead, PA. Boxx further noted “This is an important year for the towpath to be open. The GAP will be completed to Pittsburgh in late May, which makes the final trail connection between Washington, D.C. and Pittsburgh. A break in the towpath would discourage many travelers from attempting the end-to-end trip.”

As a result of the engineering study repair work to remove the slide and complete interim stabilization has begun. Superintendent Brandt stated that “If the weather and our equipment hold up the plan is to complete these steps over the next two to three weeks. At that time, the towpath will reopen downstream of the Paw Paw Tunnel and the Tunnel Hill Trail detour will no longer be necessary.”

For more information regarding the status of the rockslide and detour, please visit the park website at http://www.nps.gov/choh or contact the Chesapeake and Ohio Canal National Historical Park Cumberland Visitor Center at (301) 722-8226.

@steven – thanks for passing down the good news… I just checked the site the other day and didn’t see any updates.

The Paw Paw Tunnel rock slide cleanup is on schedule. It will reopen by close of business Friday, April 19th.

The Paw Paw Tunnel will again be closed for Spring 2017:

The Paw Paw Tunnel will be closed mid-February 2017 to as late as July, weather dependent, for “a rock-scaling project”, which involves removing loose material from the hill above the trail at the North Portal. For more information on the project, see the Paw Paw Tunnel Scaling Project Page: 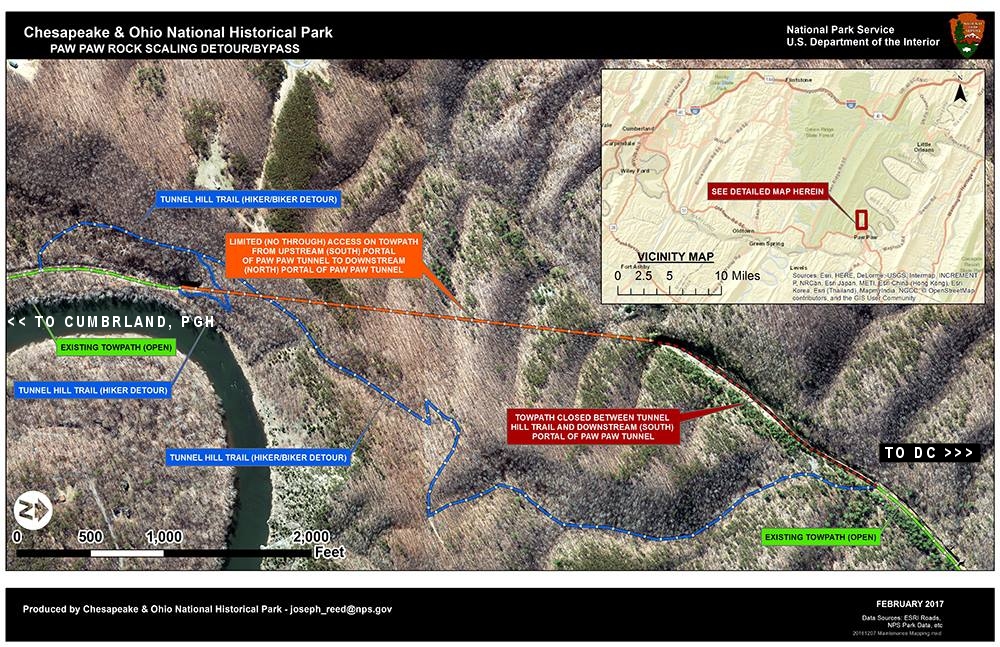 On the PGH side, they’re extending the rough path a bit and building a temp bridge across the canalway to avoid the steepest grade 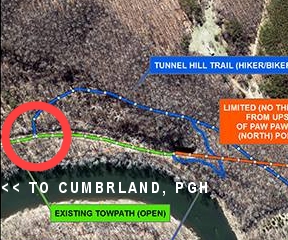