thanks for the info. I was going Oakland->Downtown this morning (which I don’t often do), and might prefer just zipping down fifth anyhow.

Oakland->Downtown on Fifth is usually pretty cool, if traffic isn’t too heavy. I take the lane and keep up with traffic, in general, the biggest problem being stopped traffic, and that one little grade past the Birmingham Bridge. Dippy to Smithfield St in 15-20 minutes is do-able; I’ve done it in 12. Takes much longer on the trail.

How about now? Drove by it today, it looks rather finished, and they even have up metal fencing so people don’t jump/fall off. They even landscaped a little and planted some little bushes and such!

According to their “plan”, it should’ve been completed already…

According to their rendering though, they have one more fence to put up:

^ I rode by today and thought the same as rice rocket – it looks done, then I remembered that the trail behind AE and the Hofbräuhaus House looked done in the spring, but it remains closed too!

As of Thursday the 15th of September (project week 55) Paved on one ramp. Probably paved by now on the other. Some landscaping and bushes planted. Probably some more to be done. Maybe some chain link fencing.

It looks to me it could be done very soon.

Paving’s done. More landscaping and a chain link fence to keep people from falling onto Second Avenue. I could imagine them opening up before the end of the week.

I can’t wait. I am so tired of the detour. Well, mostly tired of having to take the ramp off of the hot metal ped bridge. The sight line either way you go is not good.

I agree with Stef. I almost got run over during my commute last week coming up the ramp and making the U-turn onto the bridge. Luckily I saw the other guy just in time to stop.

When riding in to work late this morning there was a group of 5 non-construction worker looking guys standing around in hardhats and high-visibility vests, with one carryiing a clip board.

I asked when it would be done- they said October 3rd.

^ helen s as many times as I’ve passed workers there I was never smart enough to think to ask when its done. You are awesome.

Nah, just curiouser than most people.

I haven’t rally looked, but have they connected the bridge/trail down to the Bates sidewalk? Or do you have to go all the way down to the current detour ramp?

You will still use the ramp to get on and off at Bates.

Yesterday evening I did not notice that there were tire tracks going through the opening in the fencing on the west end, and I did not follow them through to the fence on the other end.

I’m not saying I followed the tracks today either but my commute today was without detours.

Soooo unofficially if some rebellious biker took a ride thru the trail he/she could make it non stop and non detour?

Mr. M- I would not recommend it when there are workers around. It is still an active construction site plus we don’t want to appear too eager.

I miGHT have seen someone who looks a lot like me go through there this mirning, but I don’t use mirrors so I’m not sure.

@ Marko to bad you couldn’t of asked your twin if it seemed like it was worth the wait and how nice it was not to use the detour.

i did not pass thru there last night around 11:45 after OTB and some guy did not yell at me from across the street

In my imagination it looks like there is a bunch of nice greenery along the ramps over the bridge. In my fantasies there’d be a fix-it station, too.

I’m sure the downhillers will appreciate the convenient “ramp” down to Bates St.

Like Nick and I were discussing last night while (not) standing on the bridge, it pisses me off because I’m sure it will be billed as “bike infrastructure” but in reality it’s worse for us than what was there before.

What are the odds of “making” our own rough-shod path from the Bates Street sidewalk under the Parkway over pass up to the trail? Too steep? Are they going to fence that part off near the trail bridge?

I’ve been bellyaching about this aspect of the project for the last year or so.

I think it’s way too steep – certainly for riding and even walking would be no picnic.

Nick said they were talking about some kind of ramp on the 2nd ave side. I’m not quite sure how that would work (I’ve never used the official detour), at the least it would seem to involve a lot of sidewalk riding.

There’s no way to make a more graded rough-shod path from about Hodge St. (the street that runs around and behind The Hideout Bar) up to the trail bridge abutment?

Otherwise, the only other way up to the trail is going to be to hit the crosswalk button at Bates and 2nd. and go along the far sidewalk to Hot Metal, or to turn right at the bottom of Bates (street or sidewalk) and enter via the access ramp nearly a quarter mile down 2nd. The latter option is no problem for heading downtown, but would be if you want to head to the Hot Metal Bridge to the South Side… which is basically a huge chunk of the East End and especially Oakland populace.

I don’t know the spot or what it looks like, but what’s the possibility of a staircase with a slot to put the bike tire? I know there’s one on the Montour Trail. These would be ideal where it’s too steep to put a trail but there’s enough need for access that *something* should be put there. 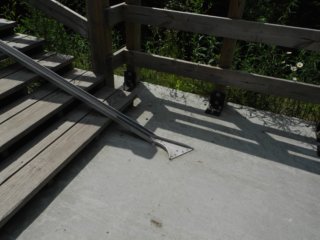 Stu, I think that that could be a possible BikePGH project or something. I don’t think there’s ANY way the city would be putting something like that.

My question to you Stu is, how steep of a grade can a set of steps like that be made? The slope underneath those overpasses is pretty steep; it has to be just shy of 45 degrees or so. Could it be built in something roughly like a rounded “L” shape if that’s too steep?

The one on the Montour is already a little hard to use, even though it’s fairly shallow. Much steeper and it would probably be easier to lift the bike and carry it.

The ramp converts the weight of the bike into a force pushing it laterally. I find that can be harder to deal with that just some additional weight. Losing your footing due to the lateral force could also be a concern (though I haven’t been on the trail bridge just after rain or snow yet).

I’m not the one to try answering that. I look at monster staircases (e.g., 10th St up to Duquesne U or Rising Main Ave on the North Side) and just carry the bike on up, while 10-steppers are enough to dissuade many.

I guess I need more info, maybe a picture. What’s the real problem here, and what’s the overall public gain by doing anything? or the loss by doing nothing?

Impala – hm, I’ll have to look at it again in the daytime. I was having trouble picturing where it used to connect at all, looking at streetview has refreshed my memory: http://g.co/maps/f77j8

I think the problem is, where those pillars for the parkway bridge are, they actually excavated that whole area a few feet. Plus the bridge itself is a few feet higher. So, overall there is a lot of elevation change to make up and not a whole lot of space to do it. But, at least I have *some* hope now – I need to go look at it in the day. The only thing I could really see at night was an extremely steep hill parallel to the trail leading down to the sidewalk on Bates.

I didn’t say it would be an easy or workable idea. It just irks me that some accommodation for it wasn’t in the plans for the bridge in the first place. Like someone said earlier in this thread, project planners will advertise how this bridge is improving bike infrastructure, when in actuality it has nothing to do with bike infrastructure at all (road widening and height clearance) and actually DECREASES bike route options by removing the access path from Bates Street.

I think there is room for a kicker lip and a nice landing ramp.

If a group tramples the landscaping there enough maybe they will find a solution.

I have only taken the “access ramp” from Bates once but don’t think it’s the end of the world that it’s around the corner now.

i think a good option will work itself out… people always make it work… within the first couple weeks I think we’ll see good options springing out of the collective consciousness about getting to the trail from bates that don’t involve crossing the road, no one likes crossing roads

What road needs crossing? You come down Bates, turn right and get on the trail.

maybe i missed something but the closest access is not the most convenient thing in the world (the old detour onramp to the trail, is their a closer one?) if you aren’t going to downtown, for example if you’re walking to the southside works, that’s pretty out of the way.

I don’t think it’s a dealbreaker but I don’t understand why they didn’t provide direct access… I think it’s pretty shortsighted, especially when considering the elderly and disabled. Its about 2,300 ft of walking that is unnecessary, that could be the round trip mile that makes the trip not feasible for some people (actually 4600ft.)

sure, but now people have to make a choice of getting hassled/hurt/annoyed by cars or walk a half mile out of the way