~180 People showed up and despite the rain I had a pretty good time. My socks were super soggy at the end. Congrats to steveo on win #11!

Who else rode? Anybody know any links to good photos or videos? I am sure some will be posted over the coming days

We were able to spectate/cheer at 3 hills: 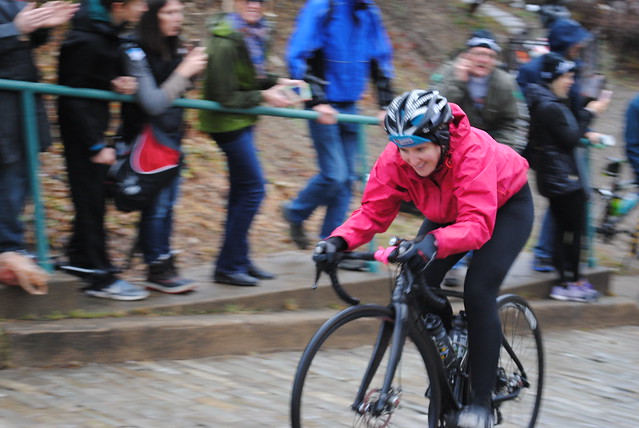 Canton was my favorite

The Washington Post reported on the race! Their photo gallery has a few familiar faces:

Yeah Jeff got a photo of me sweeping high street in that article’s photo gallery. Embarrassed.

I thought there were under 200 at the start, but when I was manning my first intersection, I realized it was a lot more than what I thought.
It would have been a much different race if it wasn’t for the wet roads. I know some super strong riders that had to put a foot down on both High and Logan because of conditions (and maybe a little bit lack of experience?). I was surprised to see these guys coming back to the bottom of the hills. And I felt bad for them.

Stef Sydlik Porter is the strongest female climber I have ever met. Ever. So nice also. She got men’s points.

Hoping to get more details on the woman that went down on Brownshill (the downhill road leading to Barryhill).

There were some real assholes in cars giving some of the marshals a hard time. A woman who lived by Canton was blocking traffic coming down Coast. Nice lady who very politely told people that there was a bike race and asked if they knew a way around. I was there for a bit and she was getting shit attitudes from some motorists.

But overall, a good day, even though I found it difficult to hold intersections for the race, then sweep up a hill, then try to get far enough ahead of the race to block an intersection ahead of everyone, but I am just not a fast climber and fast short distance rider.

Kudos to everyone who did the ride and stayed out in the rain all day. I know my socks had a weight when I took them off. The plastic bags in the shoes were no match for how wet it was.

This was my first time putting a foot down in 4 dirty dozens. I hit a tar patch on Suffolk and slipped. I decided to go back down and redo the hill because I wanted and “official” finish. Thankfully no more slips for me after that. It was really hard to get traction for most of the day.

It seemed like everything was run pretty well. it seemed like there was less waiting around on top of the hill compared to prior dirty dozens (might be because of the smaller group)

I watched some of this race and it was my first time at Canton, which was fun to watch. There sure are some great hill climbers around here. Anyway, I was wondering for those that have done this race, what are the toughest hills of the bunch? I have heard Canton isn’t in the top few. Just wondering. I did a search, but didn’t come up with a list from the toughest to the easiest.

Canton is technical but short. It requires good bike handling for sure.

The Harder ones are longer and have steep sections:
Suffolk/hazelton/burgess
Logan
Barry/holt/Eleanor

The easier ones (because you can take the outside on the switchbacks):
High st / Seavey
Sycamore

People have different opinions about which is the hardest.

A lot of people say Suffolk because it is so long. I think Eleanor by itself is ok, but people may think it is hard because it is #12. I don’t mind either of those hills. They’re long, but I don’t have any issues.

I always thought that Logan was the hardest, but I clear it well now. People forget about Boustead. It is right after canton. The top is pretty rough.

Canton used to be technically difficult because of the slick surface even when it was dry, but since it got new cobbles, it is easier to go straight up.

People had trouble on a lot of the hills this year because of wet roads. I am talking about some of the racers. And then other racers closely behind the ones that spun out happened to have the bad luck of being in a bad spot. I saw lots of racers come back down to restart High and Logan.

Again, there should be training rides next year that can allow you to ease into the hills in a small, supportive group. They start in October and we usually post about them here.

@Andrew: I took a few at the bend of Hazelton and Burgess (hill number 7) and posted them to Facebook. Not great, but you can see them here: https://www.facebook.com/sara.walfoort/posts/10204748429061047?pnref=story

@Stef; I’ve marshalled the DD in the past, and based on that experience I think that anyone who even ATTEMPTS to marshall AND sweep on successive hills/intersections is bad ass.

I usually drove between my marshalling assignments, and even then had a hard time keeping up with the faster cyclists after waiting for the slower cyclists to clear a given hill before moving on.

Skipping every other hill works well, but is most effective if you don’t have to CLIMB every hill as well! That goes double for the intervening (neutral ride) intersections that need to be kept clear. You need time to get around/past the cyclists, regardless of the route you take relative to their route.

Highly recommend the training rides as Steph mentions. They really prepare you for those road surfaces that may be a little f*cked up, and just how steep the hills can feel on a day when you might be dehydrated or don’t have the proper nutrition in you. I really learned how to get the nutrition, hydration and sleep that I needed for my personal best training by experimenting in the days before each training ride. By the time the DD Day came, I felt more confident and more prepared both physically, mentally, and nutritionally.

After the heartbreak I ensued last year, I made sure this year would put that nightmare to rest. And it did. Thanks to the incredible friends and comrades I was fortunate enough to connect with on those training rides, the combination of all of those things gave me the courage and fortitude to do well.

Special thanks goes to:
Monster Mike, Iron Will, Son of Monster Mike, Russell the Magnificent, Philly, Brian, Joe, and of course Steph and Jim. More shout outs to the “Road Rangers” that dedicated their time, cycling talents, coaching, patience and cheering skills to all of us! Jim, Steph, Jason, Russell, Neil!!!, and Chris. Forgive me if I’ve left anyone out as I did not know all of their names but please know your effort was magnificent and supremely appreciated! THANK YOU!

Yeah Lori! So happy you succeeded. It was always fun riding with you.

How are you? Thank you for the kudos and I hope you are well!

Steph thank you! I thoroughly have enjoyed every ride with you as well. You are incredible and so much fun and such a positive force. Can imagine the DD without you!

*CAN’T imagine. Jesus. I really need to proof read before I hit enter. :(

Bicycling Magazine on steep climbs in the US: http://www.bicycling.com/rides/climbing/the-best-and-hardest-climbs-in-the-us?cid=soc_BicyclingMag_TWITTER_Bicycling__

And Danny Chew named NuGO athlete of the month….!

Congrats for that recognition, Danny!

Thanks for the replies. Maybe I will give it a go next year. I am getting pretty old though. Sure is a cool event.

In case anyone felt like doing some DD training today:

???? Suffolk Street off East impassible and being shut by police! AVOID! Police asking DO NOT ATTEMPT
??