Extendng the GAP look and feel from McKeesport to PGH?

Any thoughts about extending the GAP user experience past McKeesport to downtown? Once you get past Boston pretty much all the mile markers disappear. At the pump house you get a nice mile post that is trail consistent. And then by the hot metal bridge a sign that says DC. and maybe one more at the end of the jail trail.

But it would be nice to have the white GAP mile markers throughout. And maybe something at the Point that says Mile 0, or actually 150whatever, like they have in Cumberland.

Allegheny Trail Alliance will be putting up large granite mile markers along the whole GAP Trail in the next few years, I hear.

There is a marker at the Point in Pittsburgh, but you almost need a magnifying glass, it’s so small. It’s pictured here: http://ridethegap.blogspot.com/2013/06/point-made.html

and look closer and you can read “GREAT ALLEGHENY PASSAGE TERMINUS”:

I feel stupid. I go to the point a lot and have never seen that.

I dunno. Why do we need a “Mile 0” marker when we have a massive fecking fountain? Isn’t that marker enough?

Cool. I’m in favor of more things looking like they were created by the Illuminati.

They have it. It is a little medallion. Just like the one in Cumberland in the sidewalk. So I’m satisfied with that.

There’s going to be more signs, more milemarkers. They (whoev “they” are) are working on it. ATA is working on in , City of Pgh is working on it. Things that might happen this year:
new mileage markers
maybe Grants Crossing
maybe-maybe the Mon Whorf switchback
in 2017, bikelanes on Ft Pitt Blvd and Stanwick to the Point.

@Stu, I think we need an explicit and photogenic mile 149 marker. I think that this year, they’re going to clarify that the GAP is 149 miles, not 150 miles. We need a great photo setting for the end of the trail.

But in Pgh’s defense I really want to say: the DC end of the ride is equally fugazi, and they’re not changing anything. The whole nature of the GAP changes at about MP4. At MP3 you’re supposed to cross over the canal in Georgetown, that’s not really explicit. At Lock1 you end up at a dead-end trail, and if you didn’t know any better you’d think you were done as you stare across the highway at the Watergate complex.

But if you backtrack to 31st street, go down to the river, walk past the Swedish embassy, cut across the boathouse ramp, walk around back to the dumpster, and walk another 30 feet you’ll find MP0. 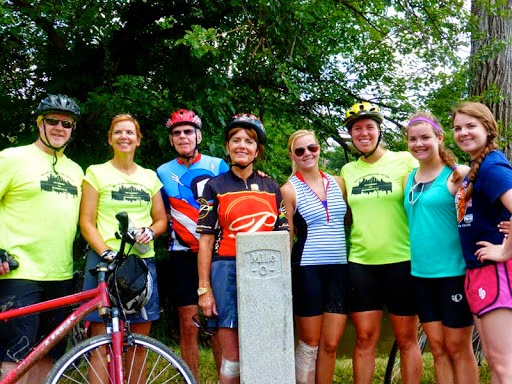 so Pittsburgh’s not doing too bad. It gets better every year, and they’re working on it. The transition at Pgh is just as good as the DC transition. 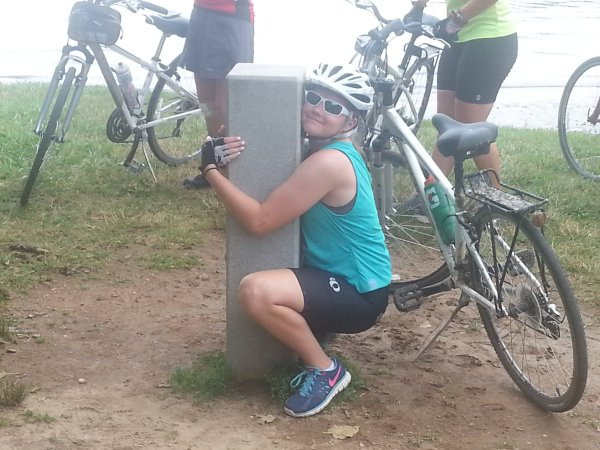 Thanks for clarifying. Makes sense. I agree that the end of the C and O is hopeless especially because the NPS C and O station in Georgetown is closed, probably forever. I found it by asking people. And there was a homeless dude passed out 10 feet from the marker.

Even more confusing is that the capital cresent trail drops to a lower block in Georgetown while the C and O stays level. So I hiked up a huge hill on my bike only to find that I had to go back down to find the Mile 0 marker.

I’d like a few more signs. Some mile markers too so that people know they are on the right path and so that people biking around downtown, south side, eft, and the waterfront can know that if they kept going they’d end up in DC. That’s just so cool and may inspire more people to ride the trail.

you know, the problem in DC is: the Watergate.

Lock One used to open into a big pool, which had one more lock between the pool and the Potomac. This final lock, and the pool next to it, were called the WaterGate.

In the post-WW2 growth of DC, the Watergate pool and swamp were filled in, and a yuge office/housing complex along with a highway was installed. They didn’t think anybody would be biking from Pittsburgh when they went about their growth spurt.

Ahh!! Hence the name Watergate. That makes a lot more sense. Thanks for the history lesson. So the building is famous for many reasons.

New mileposts notwithstanding, there are the bland white GAP posts through the Eliza trail (or were they removed last year?)–there used to be one in downtown around Grant and Second area–if I recall correctly.

The new MPs are in different locations as the trail has changed slightly; e.g., the Pinkerton Tunnel. The new locations were marked last year (or the year before?) with wooden stakes with the mile number and a pink tape–look for them; they’re about .5 miles off from the existing posts in our area.

Also, the precise length of the GAP, as @Vannevar has pointed out, isn’t 150 miles; though I’m not so sure it’s 149; I doubt it’s an complete mile; in the past I recall a figure of 147.5; some current charts show 150.5–though most show 150. Given the route from Grant Street to The Point is questionable (will we ever get the Mon Wharf route completed or will the route through Town to Penn be the de facto route?) –let’s see where the new posts go? [Reminds me of the Laurel Highlands Hiking Trail which has mile markers, with the last one being 70–but that last mile from 69 to 70 doesn’t measure up: I guess, saying you did more than 69 on the trail might be misinterpreted by some :-)]

I’m 99% sure that between the Waterfront and the point there is only one lowly white plastic milemarker left. I want to say it is near sandcastle.

funny av-geek story about number markers in the plan, political expectations and face-saving, and what really happens. When the “old” PIT airport terminal was expanded with the east dock in around 1960, and rotundas at the south dock in 1970’s, the public was promised a 54-gate airport.

Used to be at the Moon Wendys, there was a drawing of the terminal showing all 54 gates as planned. Everybody was happy until it got to the operational people, who immediately saw that if they build it as designed, an airplane pushing off the south dock would put it’s tail over Runway32. They used up so much of the available space for the building, there wasn’t room for moving aircraft around the gates.

What to do? Stuck between expectations and reality, they built it so that there would be a Gate54 AND the pushbacks wouldn’t go over the runway. How did they do that? They skipped a few numbers here and there – you’d go from Gate43 to Gate48. The skipped gates were sufficient to make things work, and the public got a gate Number 54.

Ha! No. That’s why I left a tiny bit of uncertainty.