Cross post from the other board. Making dreams a reality…

Ok, in lieu of other ideas and upon thinking about the ride type and time of year, I figured it’d be nice to visit a lot of the new cycling-supportive infrastructure that was put in place during 2010. So I’m putting together a route that will include some of the new sharrows and lanes (S. dallas, wilkins, Highland, Forbes), some “new” real estate (Bakery Square, new BPGH office), some of the hot topics (new permissions to ride in Allegheny cemetary, Great Eastern Passage), new trail (that one north of the Allegheny), etc.

Any and all help/input is both welcomed and encouraged.

No Drop (wait at hills, slow-going, supportive no matter the speed)

Begin and end at Dippy in Schenley Plaza (beside the Carnegie Museum, the giant brontosaurus). End may actually take place at a bar/restaurant near by, as participants see fit. I’ll go ahead and promise to get everybody who wants back to the dinosaur.

I’m trying to stick to 20 miles or so, so it’ll be an afternoon, given sunset/gray day likelyhood, I’d say lights are required too.

I’m not going to be able to pick up Nick’s speakers, so if people are thus inclined to have tunes, I reccommend somebody else take care of that?

does anyone have a spare bike I could use for this? mine is in the shop until monday now….

I do, if you don’t mind riding a heavy steel men’s frame. The problem would be in getting it to you. For Saturday’s ride I was able to drive the bike in. Not an option Sunday.

my first “Real” bike was a ridiculously heavy men’s steel-framed mountain bike that I barely fit onto, so I wouldn’t mind.

but, if no one has one that can make it there, that’s cool too – I meant to do laundry this weekend, and if I’m going on this ride, laundry is not getting done, haha.

K, coupla route options planned out. Not gonna hit all the items on my list, but should come close enough to satisfy

Thanks, this was fun! Beautiful day! 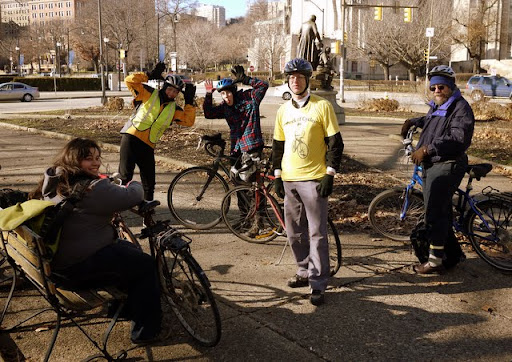 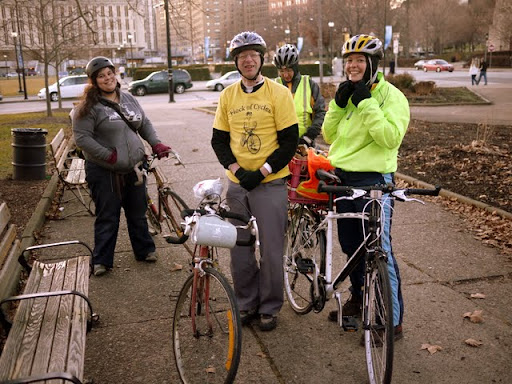 And a really big thanks to ejwme for organizing the ride and planning the route.

I like how we’re all smiling at the end, even though cold. I was freezing, anyway. Thanks to marko82 for the extra duds! I didn’t freeze entirely, because of you!

Yeah, we had a great time! The aim was to hit several new bike lanes. That resulted in a few hills that are a bit tough to get up on a high-geared bike. We made sure nobody got dropped, though.

my toes are so cold right now.

I feel like I waited for the 54c forever. My old roommate is hilarious though, because she doesn’t know how to read a bus schedule – I texted her to ask if she could tell me when the next one was due, and she told me 20 minutes (after I’d already waited that long). The bus came less than five minutes later.

Thanks everybody, especially Ejwme for organizing the ride! I had a great time!

I totally didn’t realize there were that many hills – I have no idea how Nick finds 20 miles of flat in this place!

This ride was so much fun – thank you guys for indulging my whims to ride all the places everybody talks about on here!

I think I’ll make it a tradition – first Sundays I’ll ride out for an afternoon, starting at Dippy at 1PM with whoever shows up. I’d love to promise fewer hills next time, but I’m reluctant to make myself a liar

I think for February I’ll head North a bit, see what’s there.

Thanks everyone for coming out and riding!

I totally saw you guys at the intersection of Craig Street & Forbes avenue!!! I was on my car with my brother sigh-seeing the city at the time. I was goign to honk at you, but didn’t want you to confuse me for a road-rage driver

It was a nice day to ride, indeed

ejwme, hills are a part of Pittsburgh. Riders will not become a better rider in Pittsburgh without doing hills.

I know, shel, but Nick still manages to find fewer… and I hear he doesn’t even really plot out routes in advance. It’s like mystical road leveling properties of the tall bike or something

Now that I’ve got MY bike back, I’ll be a little better off on the next ride.

+1 Noah. Also they’re very good ways to learn streets, bike/ped-only connections, and levelER ways to get around. All in a very social, looking-out-for-everyone environment.

Bike-Pgh’s purpose is to foster cycling in the city. Flock rides foster getting *everyone* out on bikes.

hey, what was the name of that coffee shop we stopped into?

they’re tied with Prestogeorge for greatest hot chocolate ever.

Well, prestogeorge’s might still be half a point above them

Noah, what would you say is number one?

I think some Flock rides should work in some hills, but I also think that there should be one Flock ride where the fitter riders form a mad cheering section at the tops of hills for those coming up, Tour de France style.

+ edmonds59. What might even be better would be a victory lap through the Roman Colosseum with Nero standing, arm straight out and thumb up.

+ edmonds59. What might even be better would be a victory lap through the Roman Colosseum with Nero standing, arm straight out and thumb up.

Our main goal with the Flock rides (and much of FoC in general) is community building–get to know people, routes, equipment, and strategies you didn’t know about.

We host a much faster-paced monthly ride, “Midnight Flock” the first Friday of every month at midnight, and we plan on adding another one soon.

The “party ride” and “Flock All Night” will continue to be “mostly flat, slow-paced, ANYONE-can-ride, type rides”.

Espresso a Mano in Lawrenceville…

haven’t been there yet.

Try out verde good beans on 1st ave downtown, right around the corner from peppi’s on smithfield.