good things about riding in the winter

Hopefully the weather we had over the weekend is the most winter we’ll have this season–I would be fine with no more below-freezing temps.

An oft-overlooked nugget of info about Groundhog Day is that it is the mid-winter point. We are now closer to the equinox than solstice. Our chances of sub-zero weather dwindle with each passing day. Of course, we can see snow into April (we had snow on April 30 one recent year), but we have gotten amazingly far without really serious cold or snow.

Annual excuse to grow an unkempt beard. Hasn’t been gathering much ice this season tho.

who needs an excuse?

Studded tires are heavy and make me even slower than I already am, but that means that when I put my normal tires back on this week, I was suddenly significantly stronger and faster than I had been previously, since I had been compensating for the big increase in rolling resistance from my studded tires for the past few weeks. This was fun to discover.

I may not be stronger or faster, but with less rolling resistance, it certainly feels a lot faster. I’ve been alternating knobby tires and slicks for the past weeks and the difference is notable!

I’m surprised that someone would take their studded tires off now, with more than a third of winter still to come. Does that mean you didn’t like them?

I’m surprised that someone would take their studded tires off now, with more than a third of winter still to come. Does that mean you didn’t like them?

Not directed at me, but I’m answering anyway…

I have a separate wheelset for my studded tires, which makes switching to and from pretty easy. When it’s not winter, the studded wheelset gets cross tires in case I feel like taking the commuter on some dirt rides.

I think I’ve used my studded tires two days so far this year.

studded tires stay on the mountain bike for me, which doubles as the winter bike.

all the days where studded tires were a must for me so far this year were on the weekend. I’ve ridden it to work a dozen times but more as a preventative measure based on the forecast or just for a change.

I take my studded tires off the first chance I get. Hate ’em. So the 15-30 minutes it takes to switch them out is totally worth it. And this winter, this has been a safe bet.

Last winter I kept my studded tires on all winter. When it snowed it was great but when the temps would go up for a few days it was frustrating how slow my commute was. This year I am doing the same thing as jonawebb only using them as needed.

hmmm, my perspective is to enjoy the ride and appreciate the marginally more strenuous workout the studded tires provide.

@Mick: I did take my studs off a couple of weeks ago, but not because I was unhappy with them. I have been very pleased with my studded tires when there has been frozen stuff on the ground, but I don’t love the loud crunchy sounds, and I’m already slow enough without the extra weight + rolling resistance. I don’t mind changing tires, so when I saw that we’d have at least a week of sunny weather reaching into the 40s, I went ahead and put the normal tires back on for a while.

The wreck I got in last week will unfortunately keep me off my bike until it gets warm again anyway, so I guess the few minutes to put the normal tires back on wasn’t a waste, since I won’t be needing to put the studs back on this year

(Along those lines: anybody know any magic tricks to heal a collarbone, like, by tomorrow? Non-bike forms of transportation are no fun. I’m already bored of this bus riding thing.)

Why not two sets of wheels? 30 second swap before leaving the house if it’s below freezing.

In my case, my graduate-student-sized budget is what stands between between me and a spare set of wheels, but eventually my plan is to do that – or better yet, to have a second bike set up for winter. But yeah, that makes perfect sense.

Clavicle fractures take as long as other fractures to heal. Sorry. At least most clavicles don’t need surgical intervention, I know that. I think cburch continued to ride to work after he fractured his clavicle or hand or maybe both. I don’t recommend it though.

broken collar bone ahhhch! i broke mine last may and had to wear a sling til july. really sucked ass. i think i was back on the bike by mid-august though. but on a positive note, since it’s been healed up it really hasn’t bothered me much at all, i haven’t even thought about it since last summer.

how long did yours take to heal? may-july: like 8 weeks i guess? they could not have been more vague with me about the recovery time. i had a nice, clean, simple fracture, so that should help, but i still have no real sense of how long i’m stuck with this stupid sling. it does indeed suck ass, but i’m glad to hear that it probably won’t bother me long-term.

also, @stefb, if he did indeed ride to work with a broken collarbone, that is just badass.

my favorite thing is biking uphill in the driving snow, and not feeling as slow as I usually do. getting regular errands done feels like more of an accomplishment (sub-zero comic book store visit. so fun) also i really like wearing the bike ninja outfit. i wish i could get away with wearing a balaclava year-round (i feel like it kinda filters car exhaust) without looking like a crazy person.

my situation was very similar to yours, nice(?), clean fracture and very vague diagnosis. if your recovery time is anything like mine (i’m a 40 yr. old man in reasonably good health) i’d say 8 weeks or so sounds about right. as soon as you are comfortable enough to do so, take the sling off a few times a day to force the muscles in your shoulder to support some of your arm’s weight, otherwise they will atrophy and will require physical therapy in order to heal properly. i am not a doctor, nor do i play one on t.v. but that’s what i did and i never had to have any p.t.. good luck with the healing proccess, it is long and boring, especially if you’re used to being active.

and back on topic, the best thing about riding in the winter is this year there is no winter!

i agree with that. i was riding without gloves for a good part of my ride this morning and i felt like i was overdressed with the choice of coat.

I must be use dto the winter because I felt way overdressed (Same temperature in november would have left me shivering, methinks)

I love how fast I get used to the temperatures, first time it gets down to 40 it feels terrible (and below freezing, too), but when it gets back up to even the mid 30s feel fantastic, thin long sleeve shirt is plenty, and often gets sleeves rolled up. The scatteredness of this winter has made this less profound, but still neat. (I remember a couple years ago napping in the sun in a skirt on a 40 degree afternoon with piles of snow still all over the place)

ok, I know this is the opposite of the point of this thread, but does anybody else feel like in the summer, a head-cold or other non-threatening illness you can roll through, but with the cold wind, biking through sickness in winter just feels like suicide?

Maybe my memories of summer breezes and sweating and snotting in a mercilessly cleansing way are tinged with rosy glasses. Or I’m just a wuss. I miss being healthy

This “winter” has been the exact temperature I hate to bike in the most. I prefer <30 or >50. The middle there… I spend it like a previous poster said, overdressed and underdressed at the same time. Even 30 and 50 are too warm and cold respectively. I’ve missed biking during transitional seasons too much to be used to it.

I have ridden with a fractured hand and/or wrist more than once. Commuting, and in the woods. When I shattered the outside half of my left clavicle I stayed off the bike for four days and then Stef pushed me out the door because I was so miserable to be around. I waited about a month before I was back in the woods. Today was one of the nicest days on a bike in a long time. Even with the sciatica.

holy crap, cburch, how did you do that? i would love to have been on my bike today – i’m similarly miserable to be around right now since i’m so used to being active – but i cannot imagine how i would possibly ride it right now. did you ride one-handed, or do you just have epic pain tolerance that allowed you to ignore whatever lovely sensations occurred if you used the fractured side, or what?

he has epic pain tolerance.. and i believe he rode with one hand. he has had too many injuries for me to remember how he dealt with each one. i will let him answer that.

yeah, I’m just being a wuss.

pretty sure I was coasting up Liberty ave on the commute home this evening.

Dodging rush hour traffic on Grant St this evening, there was strong push from lots of different directions, very unpredictable, changing every couple of seconds. I think if I’d tried biking all the way home, I would have had some serious trouble, either from being blown off the road or from a car being blown into me. The driver of the 40-foot bus I was on said that at times he was blown three feet off course. 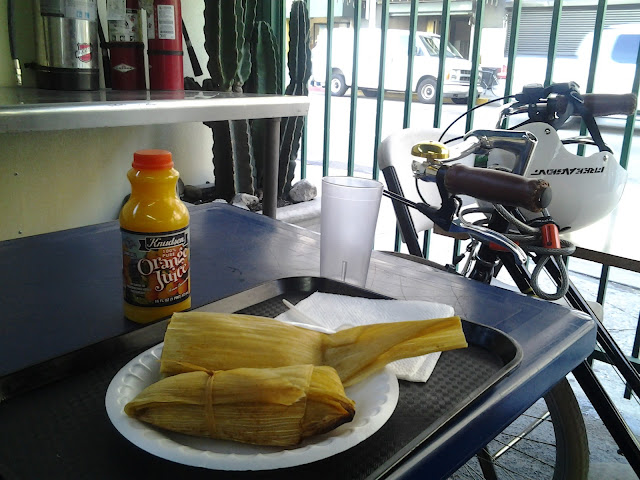 How many fire extinguishers does that place need?

Did you rent a bike out there? That looks like a nice ride!

Yes – the bike got lots of compliments but really it was just an okay ride with mediocre components (especially the saddle – eh). But, a great way to get around the downtown area. Navigating traffic was interesting….the downtown intersections are hairy…with double turn lanes. Sometimes it seemed best to “take the lane” to go straight through an intersection, even if it was toward the middle of 4 lanes! Most cyclists seemed to either do that or take the wide sidewalks. I was staying near this gem of an intersection: http://g.co/maps/yc2m9

[edit to add] bike was a virtue slope 6