BTW no problem with making suggestions about how to handle bypasses etc. in the future, but for this project, the contracts have been let and it’s going to happen pretty much the way Pat Hassett described. Any changes will happen post-reconstruction of the bridge, I’d say, and they’ll probably want to see how things work in the original design before doing anything else.
I think the conversion of the Junction Trail back to a street is more likely than any changes to the Greenfield Bridge project. Not that I think that’s likely at all; in my experience when Pat says “please make a note of that” he means to be appearing to do something about a comment so as to move on. It would be expensive to rebuild the street, cyclists (who happen to be a core constituency of our new Mayor) would be outraged, the folks in the neighborhood would have to be consulted, etc. Not going to happen.

Could we ban the spammer?

Here are articles about the Greenfield Bridge replacement in Hazelwood’s newsletter “The Homepage” in March (scan by Yale Cohen). Clicking on the image should get you the zoomable version. 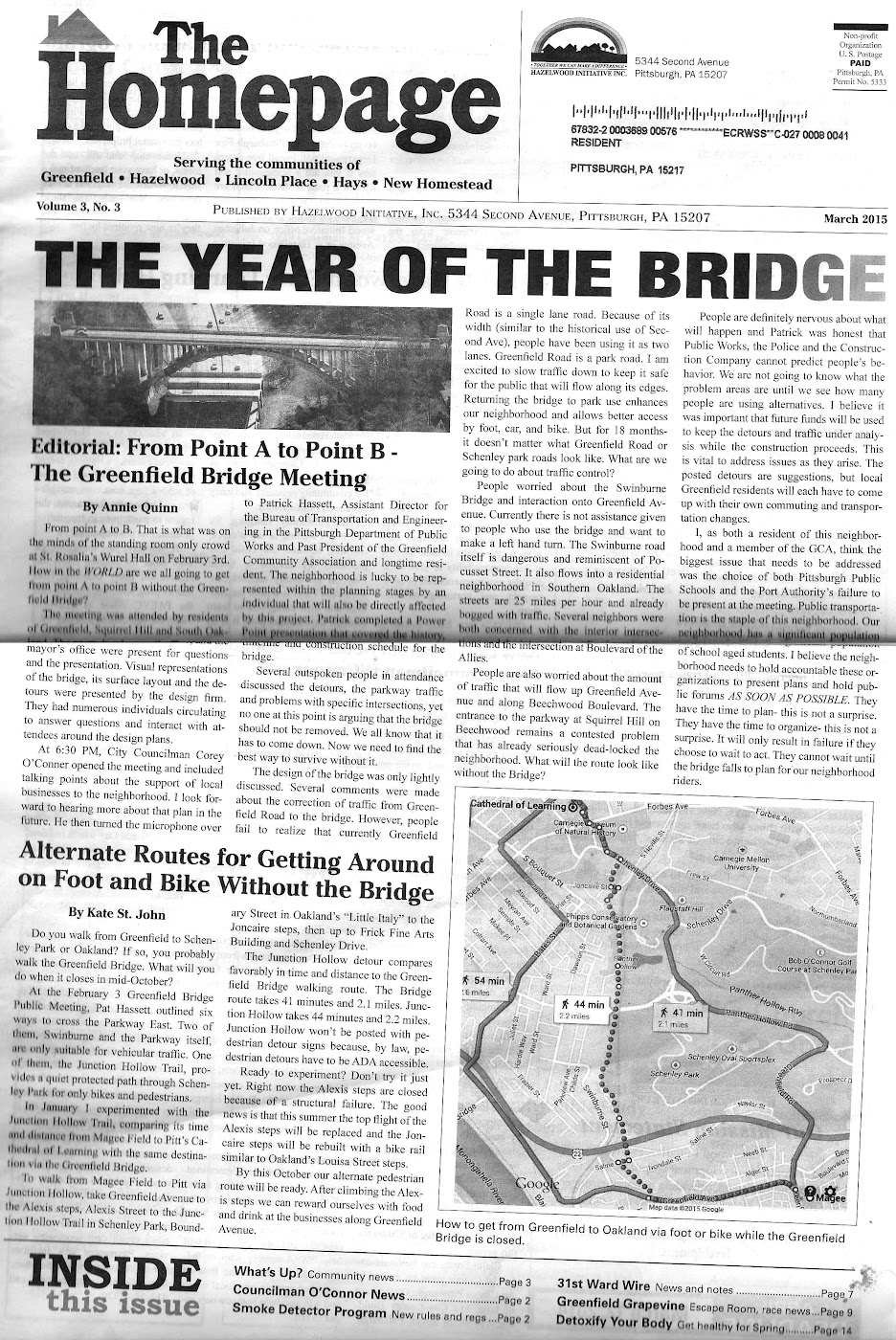 A Greenfield Bridge Public Meeting is scheduled for tonight (6/16) at 6pm St. Regis Parish Social Hall (3235 Parkview Avenue). The Department of Public Works will join us in South Oakland to review their plans and detours for the Greenfield Avenue Bridge demolition and reconstruction. The Social Hall entrance is on Childs St.

Greenfield is planning a party to say goodbye to the bridge: http://triblive.com/news/allegheny/8704684-74/bridge-greenfield-businesses

There’s a sign on the bridge saying it’s closing Oct. 17. That’s the day of the party, right?

That’s correct–the party goes until midnight, the bridge officially closes at midnight. Then they’ll spend the next two months prepping for demolition the week after Christmas…

– East on Beechwood to the Murray Ave Bridge, where ‘bicycle assists [have been] installed on Murray Ave Steps’, then winding via Murray, Phillips, Wightman, and Hobart into the Park.

– Down Greenfield to Alexis, which has also allegedly gotten ‘bicycle assists’ on the steps, then up through Junction Hollow Trail and Joncaire Street to Bouquet and Roberto Clemente.

– the map also notes that “Additional lighting [is] to be provided along [JH] Trail”…. I’ll be happy for any at all….

Does this map of recommendations from OTMA carry weight that it can be used to pressure key folks that these actually be made into viable connections? I mean, Rome wasn’t built in a day, but can we stamp some durn sharrows?

I rode through the interchange area in squirrel hill a few times this week. and going east wasn’t too bad. Going west, you have to merge left into a potentially significant flow in a short distance after a very brief rise. I knew what was coming and planned a near sprint right before to make it less stressful, but many would just not touch such a thing.

Not that it would make a categorical difference, but having something to validate that yes, you should expect us here, too, would be nice. Panther Hollow Rd. going uphill of course an extended rant of its own I’ve done many times and won’t repeat today.

“Down Greenfield to Alexis, which has also allegedly gotten ‘bicycle assists’ on the steps, then up through Junction Hollow Trail and Joncaire Street to Bouquet and Roberto Clemente.”

I have two problems with this suggested route.

1. The Alexis St steps have only been minimally repaired and there’s no indication of bike assist coming soon.
2. Joncaire is cobblestone. I have not found traveling uphill on cobblestone to be a pleasant experience.

I don’t think many, if any, cyclists would ride up Joncaire in the street. I always take the first street on the left (sorry, don’t know the name) then the sidewalk when I hit Joncaire. As the sidewalk is not business district, and usually not many pedestrians, it is a good option.

I think that’s yarrow. It’s the way I go up as well.

I ride up the cobblestones on Joncaire, but it’s definitely not for everyone, or most.

I love bombing down the hill after work :)

I have lost and had to recoverymany items bombing down Joncaire.

I ride up both Yarow Way and Joncaire depending on my mood. Joncaire definitely builds your character.

FYI, you Parkway-riding miscreants:
“The City of Pittsburgh Department of Public Works has announced that I-376 East (Parkway East) inbound and outbound lanes will be closed to all traffic on the following dates to accommodate work relating to the Beechwood Boulevard (Greenfield) Bridge replacement project:
Friday November 4, at 10:00 p.m. until Monday, November 7, at 6:00 a.m.
Saturday, November 19, at Midnight (early morning hours of Saturday, following Light Up Night celebrations downtown Friday) until 6:00 a.m. Monday, November 21”

Are we getting to the point that they can start putting up the new deck?

Steel work for the arches will be done this Fall but the deck won’t be paved until next season.

No one is planning on doing anything in regard to the information that Jon mentions above, are they? Because I might be interested in knowing that nothing is being done. Regarding that.

I could not possibly participate in such a miscreantic affair as that, Friday night, being that it’s my birthday and so I would want to go to bed early like a good boy.

Yes.  Closed from Wilkinsburg to Oakland

You may have to poke around a bit. The Beechwood Blvd camera shows exiting the tunnel, while the Commerial St shows entering.

Region=Southwestern (Pittsburgh); Route=I-376 Parkway East; then pick a camera, as above.

Picture from 10/30 of the bridge under construction: 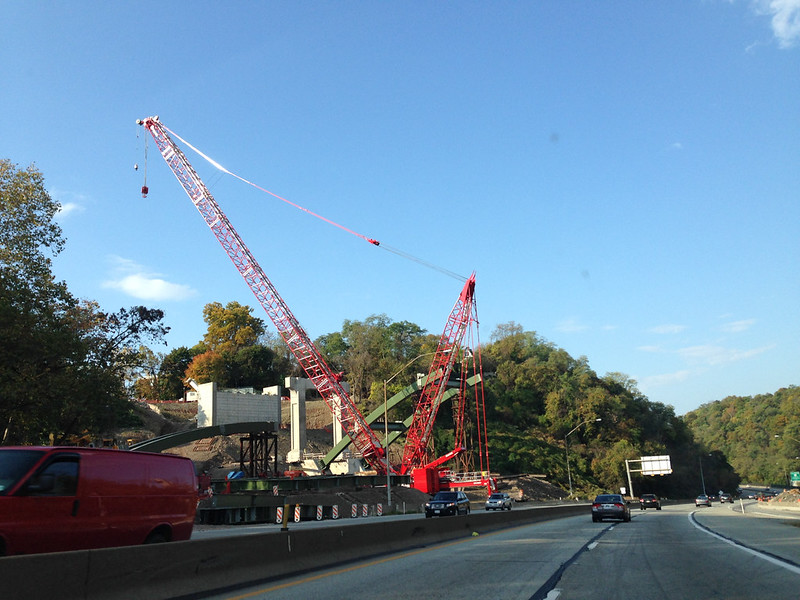 See a time lapse of the bridge construction:

<p style=”text-align: left;”>From what I read the opening ceremony may not coincide with the bridge actually opening. There may be a few days difference. Has this changed at all?</p>

<p style=”text-align: left;”>Whenever the tunnel is closed on the weekends Braddock and Forbes and shady become parking lot esque.</p>

The party starts at noon. What side of the bridge is it on?

Of course, the side that is more difficult to get to!

My guess is that the bridge will be open to peds during the festival if you read the schedule.

I went to the event today. Here are some photographs of some of the associated bike infrastructure.

Is anyone driving going to know what this stuff is? Are they going to obey it?

Bumping this thread, I need to know.

Today, I went across the bridge and noticed horses blocking the Pocusset St. bikeway. Why is it blocked? Is there some maintenance going on there?

Could just be to prevent drivers from attempting to turn on to the  Pocusset St. bikeway it as they adjust to the new traffic patterns, but that’s just a guess.

Last Sunday I rode across the bridge from Greenfield toward the park and then turned up Pocusset. Half way I encountered an elderly couple in their car driving down Pocusset back toward the bridge. I stopped them and asked if they knew that the road was a pedestrian and bike thoroughfare. The driver said that, “I know now”.  Despite the little curb thing separating the traffic crossing the bridge from Pocusset it wasn’t real obvious that Pocusset was not for cars. There was no signage that I saw. I suspect that my elderly couple were not the only ones to drive to the concrete barrier at the end of Pocusset , only to turn back in confusion. I haven’t been back since Sunday but the horses seem like a reasonable temporary solution.