I’m debating converting from drops to H-Bar (or probably the Surly Moloko bar which is an H-Bar with some extra nubs to grab onto) and wondering if anyone has any experiences.  I was 100% on board but now I’m having cold feet.

I do ride on the hoods probably 90% of the time, but of course on Thursday it was windy as hell so being able to get down in the drops was nice. I also commuted on a MTB for a long time so I’m no stranger to flat bars, but I also know the danger of riding long distances without varying your hand positions.  Does the H-bar give you enough variety?

I’m mostly trying to free up space to mount stuff on my bars, so maybe I should just address that issue directly… but the thing I want to mount is this dog carrier so I’m worried about using anything like an extension.

I have Jones H Loops on a fat bike and like them.  There are many hand positions.  If you are trying simply to free up space, you can get a mount that fits on fender mounts for lights.  I made my own out of pvc and it works like a charm.  Puts the light at a lower angle and helps keep the light out of onward riders’ eyes.

I had a handlebar camera bag with a plastic mount.  It was pretty good for a few years.  The interface between the bag and the mount cracked over time.  I may have hit a bump or something.  You might want to free up space and go with a metal basket with the extension you posted.  A few years ago I was interested in the mount you posted and posed a question to owners on an Amazon link.  The users recommended only to use it to mount lights and such Though one guy said he was able to pick up his bike holding the extension bar and shake it.  That doesn’t show it’s strength over time.  Maybe something from Wald will work.

My drop bars have an extension from the ends towards the middle. Gives an extra hand position (Greg LeMond invented it). You can also mount stuff there. They’re called “drop in” bars.

Thanks for the suggestions.  I gave it another shot today and managed to fit everything on the bars (a bit off-center but NBD), I gave up a little bar tape on the left – although I still have more room there than I do on the right which is basically just big enough to accommodate my hand.  So at least that is solved and I can decide if I want to switch bars independently.  the answer to that is probably not – I’m still intrigued by the Moloko but it would cost me a couple hundred bucks plus I’d have to redo my bike fitting…  and I’m reasonably happy with the drops in any case.

FYI the bell is mounted on the spacers and the light is mounted to the fork crown (below the bag), so I’m using pretty much every available surface. Well, I did move the light switch to the side of the stem but ended up moving it back. I’m very happy to have the bag back (Ortlieb Ultimate 6 M) since it’s great for long rides, and I can mount the pet carrier too (although I have to move the light out of the way).

I do remember seeing those “drop in” bars although it doesn’t look like they’re made anymore? 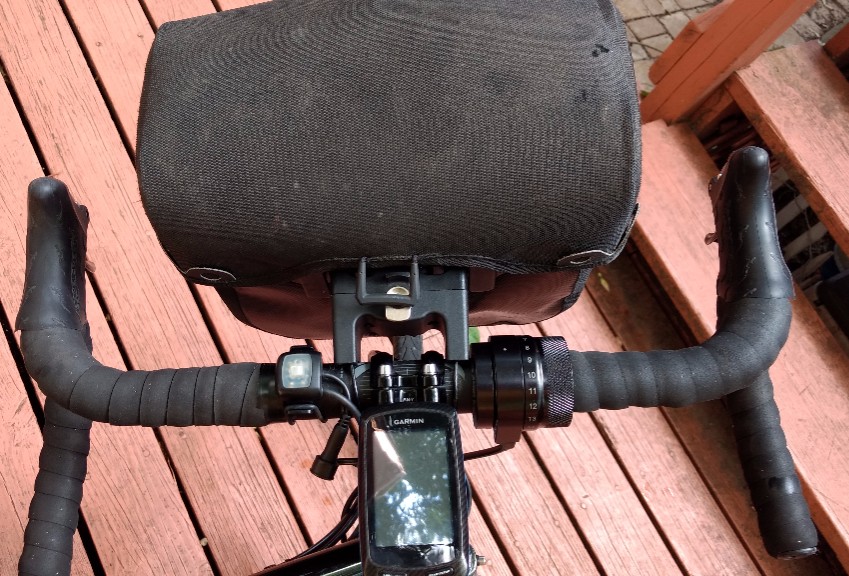 Yeah I couldn’t find them either. Scott used to make them. Can still find them on eBay etc.