Have you made your 311 complaint this week?

The NST used to have big metal pillars that were a pita to get through.

Thinking more about the issue,.it seems that trails should have something flexible that can be easily replaced for the middle of the trail to stop cars (or get them to think before going) but that are also not dangerous when struck by cyclists.

Something like the Penn Ave bike lane needs physical separators. A barrier if you will.

Just made a bunch of 311 complaints with photos, for flexposts. Lots of spots on Penn Ave (as discussed above on this thread), also just past by subway stop, plus around Children’s Museum:

Bless you! I feel like I’m the grumpy old “get off my lawn” man when it comes to 311ing these. Every little bit helps. You did a fantastic job.

ugh, I posted my 311-ish complaint on the wrong forum!  Here’s what happened when I hijacked the tag-o-rama thread–

Eric
Member
08/22/2018 at 8:39am #Reply
My quest to get someone, anyone to trim the north shore trail between the Millvale boat house and the 31st st bridge has failed. Pgh311 says it isn’t pittsburgh (most of it is according to Google maps) and Millvale doesn’t respond. Anyone else have any pull?

jonawebb
Participant
08/22/2018 at 9:29am #Reply
Did you try the council representative for that district? They have someone on staff whose job it is to help with citizen requests. From this map it looks like district 1, which is, gulp, Darlene Harris. Anyway I’d give her office a call. Maybe emphasize how important the trail is to keep cyclists off the street. 412-255-2135

311-d 2 vehicles parked in bike lanes today, one at convention center hotel on Penn Ave and one at Nova Place, North Commons & Federal. I’ve taken to including photos of license plates.

Please straighten or replace the bollards. Bollards help protect cyclists in the bike lane. The more of them that remain bent and damaged, the less safe people will feel when using the Penn Ave bike lane, and the more difficult it will be to encourage people to take up cycling in this area. This is particularly important toward helping women, seniors, and parents with children to feel safe. 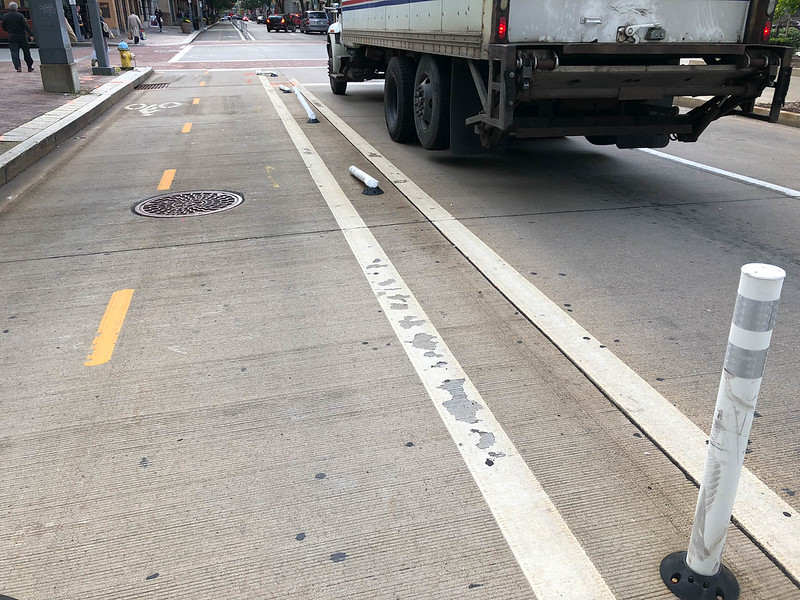 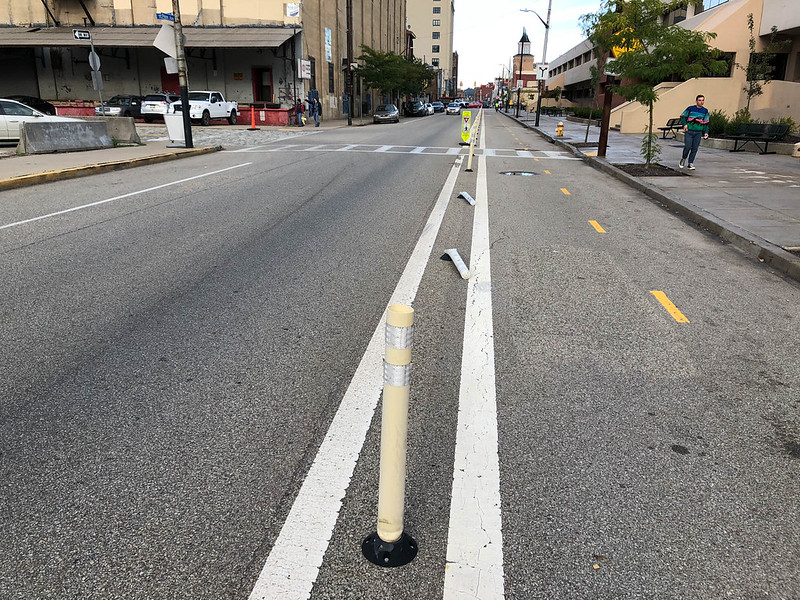 There is approximately 3 month lag between bolkard 311 request and went it gets done. Especially on the North shore trail. I think they only bollard replace once a year. :(

I had been delaying posting 6 of 11 bollards down on north shore trail between casino and penitentiary just because they keep getting run over by Alcosan and other maintenance people and not a lot of people with the lack of brain cells to drive on what is clearly a trail.

But at 7 this morning I had 3 cars in a row driving on the trail from around Casino to the Cardello lot.

Does anyone know who to contact about changing the type of bollard to one with a spring that will withstand being driven over?

From discussions on here before when it has come up re: the bollards, the spring back ones don’t really spring back after being driven over repeatedly. It also won’t stop anyone from going on the trail — if they know it just springs back up, they’ll continue to drive. So I don’t think the city is going to change. What really needs to happen is that they need to get serious about no cars on the trail and enforce it. I’m afraid if they put in a hard bollard (i.e., metal) then a biker will crash into it and die. Or they could go back to the super annoying gates, which cut down on traffic on the trail but made it so you had to stop every so often to go through tiny spaces…

Or maybe a coalition of the willing can get some huge boulders and dump them on the trail in such a way that vehicles can’t get through… Though no idea how we’d be able to do that. and, it probably isn’t legal. and stops appropriate vehicle users (DPW, emergency responders) from getting to the trail….

@jstalnaker2112: You could contact Valerie Beichner at Friends of the Riverfront. That organization maintains the trail (I’m a volunteer with them). FOTR does light work such as picking up litter and minor pruning, while the city’s Department of Public Works does heavy work such as replacing bollards, patching asphalt, or mechanized pruning.

311ed the dead canoe on the NST outside of PNC park. It’s right next to the pgh police boathouse.

Getting really sick of the increasing number of folks parking in front of the switchback on the North Shore.

Glass in westbound bike lane on Forbes Ave in Frick Park (just west of the west end of the bridge). Please street-sweep the glass. Thanks.

Today, while biking the bike lane, I rode at the left edge of the bike lane there to avoid the glass, but that puts me in greater danger of being struck by an inattentive driver. Bike lanes clogged with debris like this put cyclists at greater risk.

Someone dumped a huge 1980s projection TV (one of those that are basically 6 feet by 6 feet and weigh a million pounds) on the north shore trail (about 1 foot off of the pavement, in the bushes) right next to the pedestrian ramp/bridge to washington’s landing.  I 311ed it, and 2 days later it was gone.

I guess someone didn’t want to pay a zillion dollars for disposal costs for that.  Basically the only place that will take an old TV for recycling is Evolution E-cycling in the southside and a big TV like that will cost $60 to help defray the expenses of getting rid of all of that lead. My guess is that Evolution e-cycling will lose money for every TV like that that shows up.

those 9 have been down at least since last september or october, when they replaced them the last time.  Or maybe it was august.  I don’t think there was more than 5 days where all the bollards were up.  I complained to 311 a long time ago about the bollards on the trail and I got a “we’ll replace them the next time we go out bollarding” type of response.

THey must only replace the bollards once a year.  It doesn’t stop the ALCOSAN truck (as well as people looking for shortcuts to get to their boats) from crushing them within days of replacement.

I sent a message to 311 the day before you, I counted 3 missing and only 3 of 13 still standing.   Yesterday I went through and removed the bolts from the 3 spots that are missing, hopefully to reduce a tripping and/or puncture hazard.

Sidewalk of Route 28 between 31st St and Vinial St:

.@Pgh311 The sidewalk of Route 28 between 31st St and Vinial St is very cluttered with litter and needs a cleanup: leaves, twigs, vines hanging in your face, plastic bottles, lots of broken glass. It's unacceptable for cyclists & pedestrians. pic.twitter.com/4ovCduH4oP

Thanks. I cycled that last week and forgot to 311 it.

I did 311 the north shore trail coming apart with loose mounds of asphalt by the Morgan Apartment building. Within 2-3 years the n shore trail asphalt will be pretty far gone over most of the stretch between downtown and millvale… Wish they’d seal it every so often

The North Shore trail from 16th St to Millvale got a tar-and-chip treatment in (I think) 2013.

Illegal Parking
ID
319456
Location
5100 ROSECREST DR, Pittsburgh
Status
open
Comment
There are many cars parked on sidewalks throughout the Stanton Heights neighborhood. Many of the cars are completely obstructing the sidewalks. Please issue warnings to residents.

I attached some photographs

Yesterday I reported the following and today I got an email “Your service request ID#: 326102 has been registered and forwarded to the appropriate representative for action”.

There were ten bollards down (base ripped out of asphalt) on the Southside Trail just west of the intersection of S 1st St & McKean St on 3/17. (Earlier I reported three bollards down here on 3/14: https://twitter.com/paulheckbert/status/1106422861609095174 . Perhaps St. Patrick’s drunks saw the 3 down and got “inspired”). See picture. Please repair. 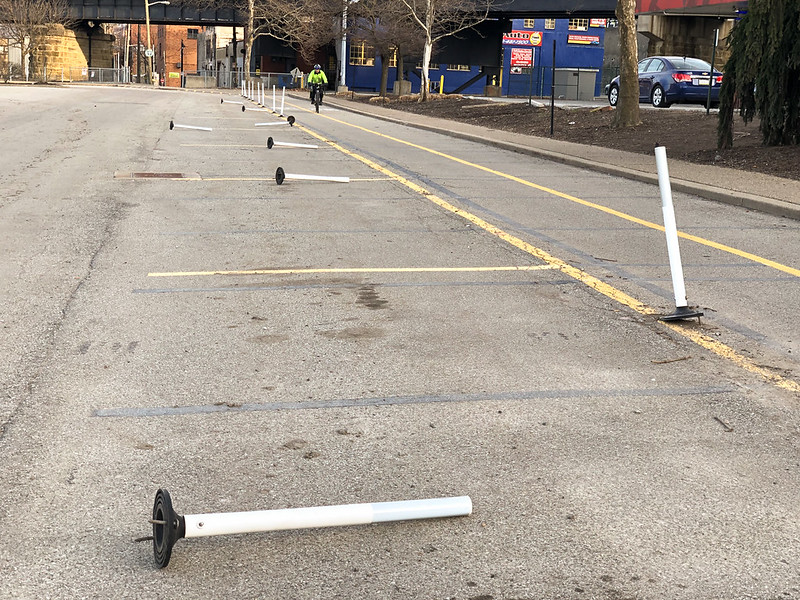 When I rode through this area on Wednesday afternoon, all of these bollards were fixed.

I reported this to Allengheny County at http://www.alleghenycounty.us/contact-information/contact.aspx as I was told by PGH 311 that the county maintains the sidewalks of this bridge.

Please clean up the bumper, side mirror, and other car debris from the east sidewalk of the Homestead Grays Bridge. Cars chronically endanger cyclists and pedestrians on the roads. Now their junk is endangering us on the sidewalks, too! See attached picture. 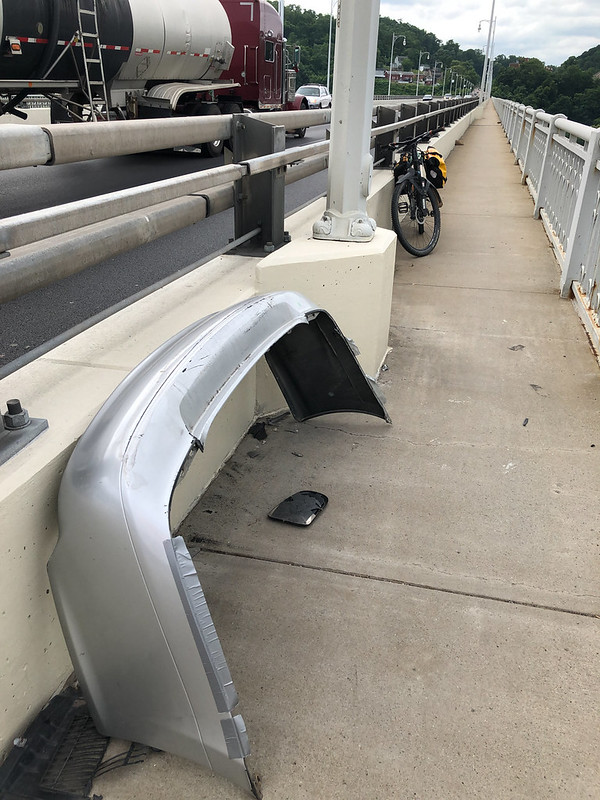 Could use support reporting the Negley bike lane at Black St heading towards Stanton. I have reported this spot since August, as the outer bike lane is completely worn away right after the light. I have entered at least 6 tickets and I always get “printed for supervisor for review” and nothing changes. Today, in the rain about 730pm, I was 6″ from being struck by a truck from behind. I don’t know what the driver thought I was doing, but the shift after the light is so dangerous and more so when people cannot see the lane. 538 Negley St is where I continue to report it. Maybe if we have a lot of messages they’ll stop ignoring it as a real issue. It won’t take much paint to just go over it, though I’ve requested bollards be placed there. Though then I’d have to report flattened bollards constantly. I’m just very sick of hoping I don’t get hit there every damned day.

I haven’t been there in a few months.

I think it may be time to take your complaint to the city council person for that area. Is that deb gross? my guess is that if you tell her what’s been going on a staff member will be better able to knock heads at public works than an ignorable 311.

From last week. I 311-ed this, and also notified Friends of the Riverfront.

New graffiti on wall near Eagle Lake and Glenwood Bridge.

@pgh311 @PennDOTNews Someone please fix this rut. A left turn off 5Av onto Bouquet in Oakland, this could dump the bike in busy traffic. Almost dumped me! pic.twitter.com/9iOWR1XxOc

@Pgh311 9th St at Liberty Ave. Bricks getting spaced enough someone on foot or bike is going to get hurt. pic.twitter.com/oIe2oYmleK

and their response (so far): 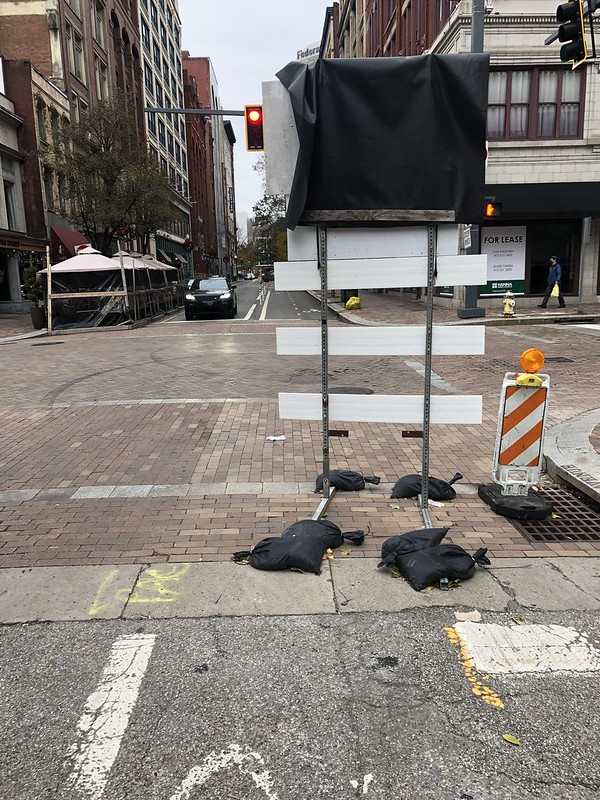 sent this in today- sign forces eastbound bike lane into oncoming traffic at 9th and Penn Avenue downtown. Sign can be moved over a bit.

Tweet #1 without photo:
Liberty Ave outbound at the end of the Bloomfield Bridge has a nasty hole developing next to a storm grate. Couldn’t get a photo but just cross from sidewalk to sidewalk across the end of the bridge & you’ll see it. Big enough to eat a bike wheel.

Tweet #2 with photo. (Yay for the rear camera working!)
Here is that hole I mentioned last night. Liberty Ave outbound at end of Bloomfield Bridge.