How many bikes allowed on the T?

Hey guys I was wanting to do a small group ride where we ride from downtown to the montour trail to library (~50miles) and then take the T back to downtown.   Is there any way ~10 bikes could go on the T?

But if you are ok to ride another 28 miles you can jump on Montour trail (Almost at intersection of Brownsville and Stewart), follow it, get on Piney Fork/ Peterson and end up in McKeesport, follow GAP. https://ridewithgps.com/routes/5990461

Or with very gentle climb go throw Stewart/Stoltz/McConkey/Corrigan and follow route in reverse from mile 17 but use Curry Rd from Horning instead of Brownsville. If you decide to use Brownsville then I would advise to jump on Streets Run (it’s almost all downhill from there) and jump on GAP.

You’d be hard pressed to physically get 10 bikes on a T. I’ve been with 3 before and it takes up almost all the space behind the driver. If you went during a low traffic time you could maybe get 3 on each car, for 6 total. Then have your next group get on the next train out? Blue line has 2x the cars the red line does.

The light rails in Portland and San Jose (and probably other places) have sections with bike hangers than accommodate a fair number of bikes. PAT ought to be able to spec these for their next batch of cars; it’s likely a standard option. 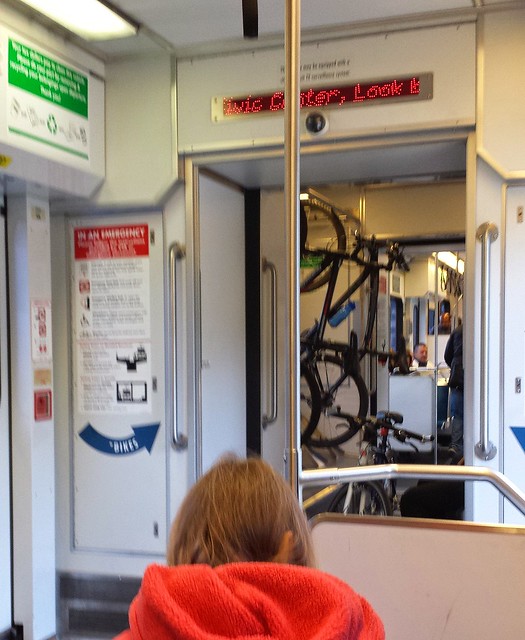 Officially, bikes are supposed to go in the wheelchair areas, after folding up the seats there. Each car has two such spaces, so two bikes. Actual wheelchairs have priority though.

A single Library car with no disabled passengers could probably hold six bikes while still leaving room for other riders: one in each wheelchair space, one pressed up against the single seats opposite the wheelchair area, one each blocking the rear and middle left-side doorways that won’t be opening on a Library trip for any stop south of Gateway. (Perhaps you could even fit two bikes at each doorway.) Whether the operator would permit that is hard to say; maybe if it’s a very low-traffic trip. If they’re running two-car trains, you could perhaps carry all ten in one shot, but that depends on when you show up, and whether there’s an event downtown that requires extra service. (I believe they run two-car trains during commuting hours M-F, plus certain other times based on events. Arriving at Library when a Pirates game is about to end on the North Shore would probably give you an empty two-car train, for instance.)

Mikhail gave you some good options for riding back to town, but another alternative with less riding would be to split up your group, sending as many as you can back via the T and some others via bus. It’s a pretty easy 8 mile ride from Library via the Montour Trail to Route 51, where you can catch a Y46 (or Y1 on M-F) to town, or on to the end of the Montour at Clairton where you can catch a 55 to McKeesport and transfer to a 61C.