Swalfoort wrote:+1 for the need for runnels at one or more of the Three Sisters Bridges down to trail level.
Access from the trail to the bridges, or from the bridges to the trail, is virtually non-existent.

Ever try riding down the switchbacks next to pnc park? if you can succeed without a footdown, then you will probably excel at cyclocross racing.

It’s so narrow that two people in wheelchairs going opposite directions probably couldn’t get by each other. One at a time, and it will take 5 minutes to navigate.

The comment pointing out that, on the whole, habitual riders will just do the climb is spot on. It’s a matter of effort: if your legs are in good shape it’s just easier to keep riding; otherwise you have to get off, hoist the bike, maneuver it up some stairs using only your (keyboard adapted) arms, get back on, etc. Man, that is work.

My personal example is the the short push up from Saline over the track, to the UPMC parking lot and the Jail Trail. I mean, way back I thought that I was pretty cool and in the know when I was doing it. But actually, it’s a whole lot less work to zip down the street to 2nd and back up the hill to the parking lot. (While this is not a runnel thing, the concept is the same.)

So wither the runnel? Stairs where they really are the only sensible choice for the commuter.

Apart from ones that respect the effort trade-off the only ones that make sense are ones that make things accessible to the casual biker, maybe the ones who would otherwise balk at a climb up a spot of interest.

But while I have your attention (?), there is one improvement that would make a big difference: install a ramp or switchback at the Duquesne Incline: The current scheme is useless and forces cyclists onto a roadway, where they have to negotiate an intersection and speeding traffic. Then there’s the stair piers, a bus shelter…

That sidewalk is dangerously narrow and should be widened (up to the bridge, realistically). Cars travelling at the posted speed limit would not have a problem with this, especially as they are simply heading towards a traffic light at the WE circle. Heck, I’ll even post a few bucks to some pedalstarter site to show my support.

One could say the same thing for bike lanes, bike racks, etc. Those of us who are riding really don’t “need” them. but they do make biking a more convenient choice for more people, and legitimize people who use them.

Yes, please on the West End Bridge – particularly on the stairs on the upriver/north side of the bridge. These are the ones that let off right by the casino/trail. More and more I’m running into other cyclists as we lug our bikes up and down those stairs.

I also agree on the sister bridges, particularly 9th.

If they ever connect the dead end of Saline Street with Greenfield Ave/Rd/Pocusset, that should have one.

Erok, point taken. But let’s be sure that the improvements happen in the right places for the right reasons.

no doubt. that’s the reason i made the thread

and trust me, it will take a long time for the next one

But I tend to also worry about things like the bit of Bouquet between Sennott and Clemente. It’s been fitted with a bike lane, which is nice if you’re continuing on to Joncaire or Bates. Bikes turning left onto Clemente have a bad choice, and drivers get confused (and annoyed by these bikers who refuse to stay in their lane). It would have better been sharrowed.

The lane was probably put in without input from bikers (if it was, what were those people thinking?). But hey, on paper and in the photos it looks like the bike people got what they wanted. (And still they’re complaining! Where is Rob Ford when you need him?)

Ahlir wrote:But I tend to also worry about things like the bit of Bouquet between Sennott and Clemente

I ride this every day during evening rush hour, and have had no problem at all with drivers here when I simply take the lane when turning from bouqeut to clemente. I find myself having to watch out more for a huge number pedestrians jay walking here than cars misbehaving.

Baldwin road connects to the GAP trail by keystone metals, it’s relatively low traveled. A couple blocks down there are two sets of stairs that take you from baldwin road to the glenwood bridge sidewalk (east side).

The lower set of stairs starts near where baldwin road passes under riverton street overpass. it’s a bit narrow, and the stairs are not in the best condition, but this could be an ideal place to add some runnels to make a connection to the glenwood bridge.

You go up a first set of stairs which is multi-level (kind of like on west end bridge), and then follow the sidewalk about 50 feet to a narrower set of stairs (rails may need to be altered or moved to accommodate the runnel).

The city’s first [stairway] bike ramp was built on Louisa Street in Oakland. Another is in the works for the stairs behind the Frick Fine Arts building that go down into Panther Hollow.

—PittsburghTODAY, Bike City: Envisioning a cyclist-friendly Pittsburgh via a network of new lanes

Digging up this old thread since it’s closely related to discussion in a P-G article in today’s paper.

A runnel is not specifically mentioned in the article, but a runnel next to a staircase next to a T stop would make that neighborhood atop the steps more accessible to cyclists.

The city has tried several times to include runnels that simply do not work. Accessibility rules requiring handrails often conflicted with runnel design, which is perhaps most apparent on the N 41st Street walkway over Aurora. The handrail gets in the way of handlebars, wide bikes, baskets or even simple bags.

My take on this is that it seems backwards, pushing it up on the drivetrain side.

According to Corey O’Connor’s Twitter, the Alexis St. steps now have a bike runnel. Also, it looks like the steps have been reconstructed: 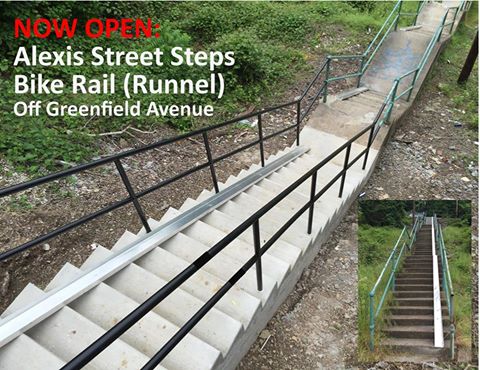 Personally I don’t find bike runnels of that much use, but those who like them, go for it.

Do we have any inkling which steps are on the short list to get these next? Did this tie into last year’s steps inventory in any way?

I’d like to see at least one on the north-ish side of town.

Our Penndot friends need to look at this on the connection from the end of the Glenwood bridge to the GAP trail where they are currently reconstructing the overpasses.

They shouldn’t re-use the old deteriorating staircase, they should replace it with ramps with switchbacks wide enough that two bikes can pass each other without dismounting!

Though I would love to see some runnels on the stairs next to PNC park at 6th street bridge and the downtown side to connect to the bridge with bike lanes which can take you right to market square. It would also be awesome if they made market street contraflow for bikes between the square and liberty ave so you could ride both ways between market square and the stadium.

When I said north, I was thinking up in the residential areas, like the three above James St behind Allegheny General Hosp up to Henderson, or the end of Arch St up to Perrysville, beyond Randyland. That would make biking up to those areas eminently more do-able, since pedaling up Federal, even to the lower corner with Perrysville, is very difficult. James and Arch have much less traffic, and their respective sets of steps get you up the vertical climb with much less effort.

Both contain turns, though, which will make them harder to do.

Eat That Read This #435 mentions this WTAE story. Includes video.

They are also misinformed on the WTAE story.

“The Alexis Street steps in Greenfield are the only steps in the city that currently have a runnel.”

They obviously don’t know about louisa street runnel, in oakland, the first in PGH that I know of.

My buddy was involved in the design and welcomes feedback.

I don’t know much about the area but in looking at the map it appears to be a perfect spot for a runnel.  It is a pretty long staircase, so it would be a pain to carry a bike up it on your shoulder.  There is no street nearby to pedal up.  It connects a large residential hilltop neighborhood to a lot of businesses, some bus routes, and other connections down below near the heart of McKees Rocks.

Also in skimming through this thread there are a couple updates worth mentioning… The Joncaire Street staircase renovation with runnel has been completed.  Also the stairs that go from Ross Street to the Blvd. of the Allies still have no runnel, but there is now a sidewalk the whole way down the Blvd. of the Allies ramp to Grant Street.

A few weeks ago while coming up Boundry Street to CMU, ready to take my usual route just after crossing the RR tracks (that may be Neville at that pount??) going right onto Hammerschlag Dr, I decide to take a few pics of the new steps going up to Tepper…to suggest runnels, as that would be a convenient way to the campus…to my utter surprise and enjoyment…among other reactions… I see that the steps were constucted with runnels!!! And so smooth and slick…

So a general comment: What about some signage or markings to indicate bike friendly/runneled steps …?

So now that we have the Joncaire runnel, any chance we can short-list my suggested runnel series? The three sets of steps above James Street, behind Allegheny General Hospital.