If you were going to bike to Graceland….!

Earlier today, I was listening to the Graceland album by Paul Simon, and a friend jokingly said “let’s go!”

I said “there is no way you can tolerate being in a car with me that long.”

It was all in jest but it got me thinking: how would you do it???

I think you could take the GAP and C&O to maybe near Paw Paw …. and I think you could probably do a lot of it via Skyline Drive and the Blue Ridge Parkway (which are roads I REALLLLLLLLY want to ride, so that’s why my brain is going there).

Are there any wishlisty routes through TN?

I love dreaming about bike trips I may or may not ever take, because, uhhhhhh so far, I usually eventually do go on them!

Anybody wanna bike to Graceland sometime? It’ll take us a pretty good while!

With long rides like these I always start with Google Maps. None of the routes it shows has you anywhere near Skyline Drive. You basically head west to Columbus, then southwest from there.
If you go that way, randonneurs in Ohio, Kentucky, and Tennessee may have routes of interest.
Ohio randonneurs: http://ohiorandonneurs.org/
Kentucky randonneurs: http://www.bgcycling.net/
Tennessee randonneurs: https://www.harpethbikeclub.com/ultra/

Well, the trouble with Google is that it generally wants to give you the most direct route, not the most fun route!

Like, what if you wanted to as many miles as possible on Scenic Parkways (like the Natchez Trace Parkway. That connects near-ish to Nashville, right? Doesn’t exactly go toward Memphis, but ….)

Thanks for the rando links!

If I was going to do this, I would connect to some of the Adventure Cycling Association routes. Ferinstance, head west to Columbus, OH, pick up the Underground Railroad route, which is something I would love to do anyway, as far as southern Illinois, then wing it down the Mississippi. http://www.adventurecycling.org/routes-and-maps/adventure-cycling-route-network/interactive-network-map/

Emma, I think you would want to get out of the Appalachians almost immediately.

Heading for Skyline Drive is not only the wrong direction, you have to get through teh Appalachians twice, when You don’t need to go through them at all. Unless you really, REALLY like the hills

Unless there are rail trails along a river, I think you would want to avoid river valleys – too many river bluffs to go over.

OTOH, if you decide you like all those hills?

(Or converstely the extra miles taht you get from curvey river banks, like the 335 mile GAP-C&O to get 240 miles to DC.)

And you want to go a semihistoric route?

The traditional way to get into Kentucky in colonial days was to go down the Great Wagon Road which follows the Shennedoah valley, which along with the Tennesee River Valley and the Susquehanna Valley is part of the Great Appalachian Valley. Lots of “Greatness” here.

If you take Skyline drive, you will often look down on the Valley and could imagine convoys of Connestogas.

If you are a glutton for punishment, you could take the Blue Ridge Parkway to the end, then go all the way across TN from East to West. This will take you about 1300 miles to do a 800 mile trip, but after all only about 900 of those 1300 miles would be in the mountains.

The traditional route is to stay in the Valley, then after you get to Tennessee you could go over the Cumberland Gap (which is NOT the gap in the hills on the GAP outside of Cumberland MD),

The Cumberland Gap has a lot of history. This is 200 yards from where the borders for VA-KY-and TN all meet. I peed in three states once.

Colonial travellers faced various tribes of justifiably hostile natives there and would not have travelled through alone. I mean, even if they had had bicycles they would not have. Hence the convoying up of wagons in the Shennedoah.

You could wind your way to the Natchez Trace parkway and ride on it for as long as you like – it doesn’t go where you are going, but won’t take you much farther away either.

Mick, you should know by now that I L-O-V-E mountains!!

I totally dig the idea of following the Shenandoah valley.

On the other hand, I hadn’t thought of the Underground Railroad route — that seems like a solid idea and a lot more direct.

Is there anything fun to ride or worth seeking out (or wishlisty for people in the way that the Blue Ridge Parkway is for me) between here and Columbus-ish?

West Virginia has a pretty good network of rail-trails.

For example, in WV, all of the Mon has trails beside it. I think there are ways west from Farimont (source of the Mon, a kinda scary thought) to Ohio or Kentucky.

I bet there are Adventure cycling routes beside the Underground Railroad that would help you.

If you go, you need to bring back an acrylic-on-velvet of Elvis on a bicycle. 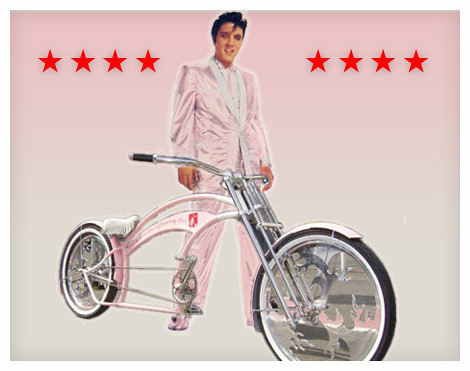 “Is there anything fun to ride or worth seeking out between here and Columbus-ish?” No.

IS THERE FRINGE ON THAT SADDLE?????

I’m trying to remember which of the ladies who frequent this board, or used to with some regularity, biked to Myrtle Beach or Atlanta or somewhere way southish.

I believe @pearmask is from metro Knoxville. I’m not sure how easy or difficult or interesting going there first would be, but she’d be one who could be better able to answer that.

The guy who’s riding the NYC Citibike across the country, @countribike on Twitter, rode from here to Cincy to Louisville just last week, FWIW. But he’s headed west across IN and IL from there.

I’m trying to remember which of the ladies who frequent this board, or used to with some regularity, biked to Myrtle Beach or Atlanta or somewhere way southish.

That was Aryn who rode solo to Atlanta. You could ask her questions, but she is on her way to Mexico right now after having ridden solo to Alaska. 100% pure badass!
background

Yeah, I was gonna chime in that it will be a minute before I can pick Aryn’s brain about routes!

If you go, you may want to start from here: 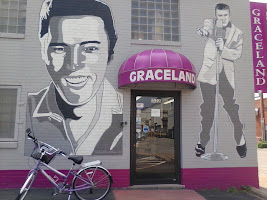 (Or even better, go there after, so you’ll have that obligatory velvet Elvis-on-a-bicycle painting with you.)

Edmonds suggestion of consulting Adventure Cycling is a great one.

About 8 years ago I rode from Pittsburgh to northern Minnesota and I’d say about 75% of my route was using Adventure Cycling routes. The roads used are bicyclist tested and they make sure to get you into some town about every 15 miles or so your never that far from water, food, or whatever. Their maps also include bike store info in case you need a repair.

Nowadays I’m sure you can get a lot of that info on the Googles but the Adventure Cycling maps were darn helpful in planning and executing the ride. I wouldn’t go without the actual maps just in case you’re in a rural area with spotty cell phone coverage. On my ride there were several places where a bridge was out, a road closed, etc. and you had to improvise and having the map was a lifesaver.

Also check the DoT’s of the states you’ll be riding in. A lot of them have good information regarding what rides are good bicycling roads. Although you won’t be going through Wisconsin to Graceland, I’ll just use them as an example. They have roads rated from green, yellow, and red in terms of suitability for bicycling. That came in real handy also in planning the ride.

Steven, where is that??!! I have never seen it!

It’s a car repair shop in Chateau, just south of Bicycle Heaven. If you click the photo, you should get a map.

I have a full set of Trans Am bike route maps from 1976, if anyone would like to refer to them. Only used once, lightly.

How do I get to Graceland?

I’ve driven OH 7 to Huntingdon, WV, but that was 20 years ago. Not sure the changes. That road follows the Ohio River. I’d think it’d be pretty hilly from there to Nashville. You could pick up part of the Natchez Trace in Nashville and head south for a while. Eventually you’d need head west to Memphis. I think it took me 13 hours by car to get to Memphis back in 93. I’m sure your trip would make for an interesting tale :-)

I drove OH7 from 22 to Marietta within the last year. Nearly level, but often posted 60 mph. I’d scope out representative samples on StreetView before trying any section of it for real.

Just took a look myself. Nice to drive, but I wouldn’t want to bike it. Your call, though.