I have a NiteRider MiNewt 250, that I run in blinky mode day and night. From the responses I get from other riders / drivers, this borders on too bright. I also have a 2w PlanetBike SuperFlash as a backup.
On the rear seatstay, I run a Cygolite HotShot, also blinking day and night, along with a PlanetBike Turbo on my helmet.
In the woods, I run 2 magic shines, 1 on the bar and 1 on the helmet. These lights are hard to beat for the price, although their real output is more like 600-700 lumens, not the 1000 that they advertise.
I really like the self contained rechargeable lights, my next mtb light will probably be a Lezyne Megadrive.

Drewbacca wrote:What on earth mars is going on with your rack??

@neilmd – Is your problem related to cold? Do they work better if it’s warmer, poorer when it’s cold?

Anyone else run into this? This is essentially the same problem I have with the helmet cam battery. The damn thing wants to shut off about 15 minutes into a ride, no matter how well it was charged.

I was referring to it not being attached to your bike on the right side, not the lights… or not attached at all?

Light setup is good, I’d do the same if I had another pair of blinkys laying around.

StuInMcCandless wrote: @neilmd – Is your problem related to cold? Do they work better if it’s warmer, poorer when it’s cold?

Anyone else run into this? This is essentially the same problem I have with the helmet cam battery. The damn thing wants to shut off about 15 minutes into a ride, no matter how well it was charged.

Battery electricity is based on chemical reaction. Colder -> slower reaction and exchange in chemicals are much slower. LiIoon, LiPo especially sensitive to temperature. But NiMh also sensetive but less. That is a reason I prefer to have battery connected to my light through long wires — I can put battery in my pocket.

Drewbacca wrote:I was referring to it not being attached to your bike on the right side, not the lights… or not attached at all?

Yes, Detective Edmonds is correct, seat post mounted rack. About 90% of the time, I don’t fold the panniers down, so the pannier racks are mostly decorative. I had a driver tell me tonight that my lights are “so damn bright.” I said, “Yup. That’s the point.”

Just ran across these. Kind of pricey, but think of the possibilites. I have an older/lower tech set of those… They are cool but I wouldn’t want to ride around with them all the time, they’re heavy. Also one of them broke its mount and ejected itself from my wheel when I was bombing Negley – I’m probably lucky it didn’t send me OTB. 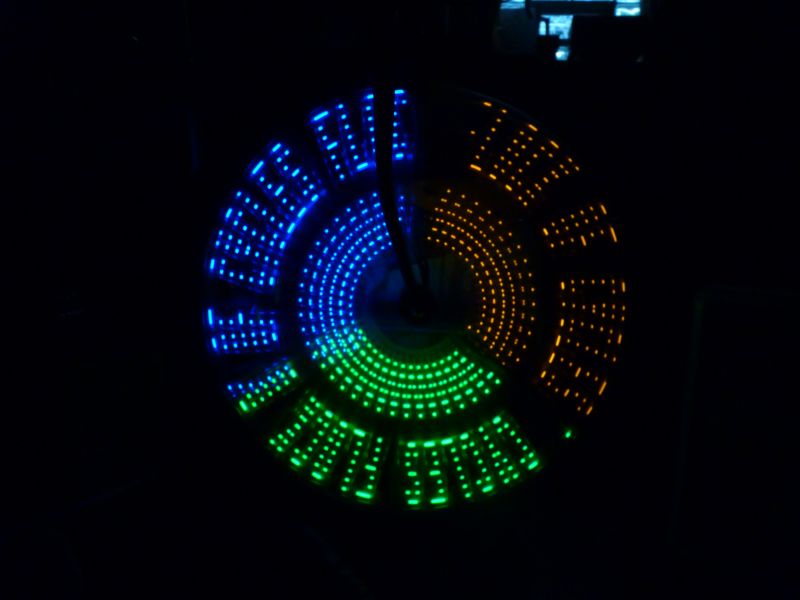 BTW, I really like this PB helmet blinky due to the self leveling feature: http://ecom1.planetbike.com/3010.html

I also have a super flash on my rack. I usually run one solid and one flashing. I decided two lights were better than one after I got home to discover my single light gave out sometime on my trip home, which of course involved riding on fun roads like Penn and 5th around midnight.

I have that PB helmet blinky. I love having it as part of my light setup because it switches with me when I switch bikes.

The self-leveling thing gets stuck because my helmet has a pointed back, but otherwise I have no complaints.

I have added a front blinky to my helmet, a Petzl MYO XP. It has a separate battery pack, so the weight on the helmet is minimal. If they can’t see me now, I don’t know what to do.

I use front and rear lights during nighttime/dusk. Both are USB rechargable and waterproof, which is awesome. My front light is a Blackburn Flea and it’s mounted to my stem. My rear light is a Knog Blinder and it’s mounted to my helmet. The Blackburn Flea is better to be seen than to see, so I plan on mounting a headlamp to my helmet at some point.

Here is what I came up with, using a smallish sheet metal screw and a drop of superglue on the threads. My helmet already had a hole for a goggle clip, but a small drill bit would work if you don’t have a hole. The key to securing the Planet Bike Superflash, no matter where you mount it, is this zip tie trick that I picked up from Chris at Thick Bikes (he has a lot of good tips) That looks great! I’ll probably see if I can do something like that with my helmet too. Right now I loop wire around and clip over the wire, but it looks lousy and doesn’t hold the blinky terribly straight.

Recalling rice rocket’s note about the importance of multiple lights to aid depth perception (and since I’ll have a LOT of lights to spare once Chanukah is over), anyone have any ideas for mounting lights to panners? Without adorment, it’s trivially easy, but they droop like crazy.

byogman wrote:anyone have any ideas for mounting lights to panners? Without adorment, it’s trivially easy, but they droop like crazy.

Can you post a pic of your setup, from behind?