Here’s the deal, we got a park pavilion reservation and a alcohol permit with the intentions of getting a keg from EEBC. There were some legal/insurance issues that came up, so we won’t have beer. However, everyone is welcome to bring a beverage of choice for themselves and to share.

We will also have food (not sure yet, but there will be something veg/vegan friendly). We are going to encourage anyone who wants to bring something to share to do so.

Anyone running late can meet the group at 7:30p at the main entrance to Highland Park

? i think i can carry at least 4 in my panniers.

I get off work in Fox Chapel at 730 so I’ll try and meet up with you guys right after.

The route has been adjusted to accommodate growler pick-up at East End Brewing Company.

excellent! although i might suggest doing it in reverse to put the beer pickup nearer the end? i’m planning to get as many growlers as i can fit in my panniers but i’m not sure about any sort of cooling.

My only concern would be not making it there on time.

I definitely don’t think we can reverse it. We would be getting there around 8p. Plus, I think we are already going to put enough pressure on the brewery.

I should be there for the ride, but may not stay for the party. (The only lock that I have w/ me is a cable lock. I also forgot to pack a light, so I’ll have to stop by Thick or REI on the way.)

Are there any quick places to eat near Dippy? I haven’t spent any in that area since ’94.

@myddrin: Lots of stuff a couple blocks over on Craig St.

I am going to try to make it to the 7:30 location. Allergies are killing me, so might be a last minute call for me.

dag, this sounds like a lot of fun. unfortunately, devo sounds funner.

also: who is responsible for flyering up the bikes around cmu? thanks for at least not putting any on my bike(s).

That was Kayla and I. Next time, If I see your bike, I’ll put a few on.

A card for every spoke, HV.

at least be kind enough to write “please throw this out for me” on it.

I still got the crate on my bike, maybe I’ll pick up some snacks on the way to dippy in a few.

Just wanted to drop a note of thanks. This was my first flock, and I had a blast. Just feel bad that I had to leave the after party early (9:30)…. but it had been a long day at work, I’d done a lot of riding before the flock started and I was tired.

And if anyone has any video of Nick getting on and off the green monster, please let me know. I want to show people that!

Definitely a fun time last night!! Fairly long ride, always a good crowd of very nice people. Lots of first timers every month! And the bbq seemed to have went off great! Cant wait for the next ride!

Anyone got a mileage count? (with or without the loop around Highland Park) I see the plan on the MapMyRide link above, but we didn’t hold strictly to that.

Someone said that including the loop, it was about 12 miles. Which brings it to about 20 miles total for me yesterday. Hadn’t ridden that much in one day in quite a while. It was nice.

Had a blast at the BBQ and the after party. Worked sucked this morning, but oh well.

Man, I wish I could’ve finished the ride. I gave up my spare tube to fix someone else’s flat and then I get a flat that can’t be patched AND in the middle of the sketchy part of E Lib too. Still, it was great up until that point, and it was nice of (I think?) Marko82 to walk back to Centre with me. I’ll just need to fill my pack with spare tubes for the next time, ha.

Noos! What kind of flat was it? Something close to the stem or a huge gash, blow out?

It was a tiny hole right at the base of the stem, where it goes into the tube; it took us a few minutes to even find it.

You don’t need a pack full of spare tubes, just a patch kit. 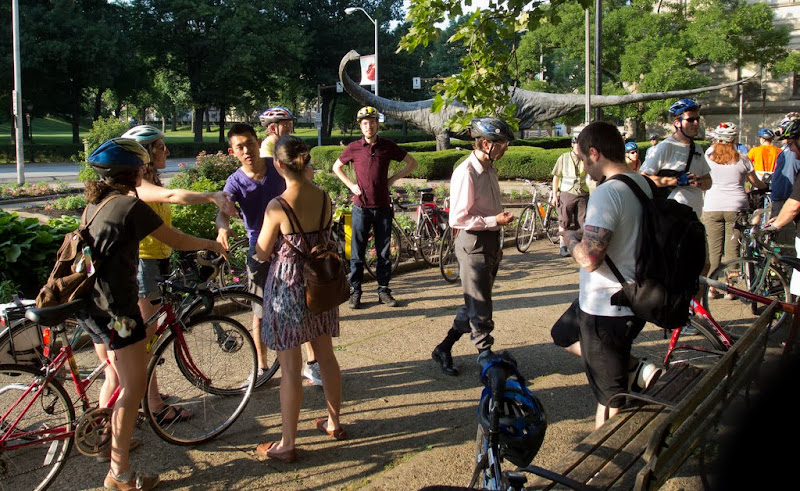 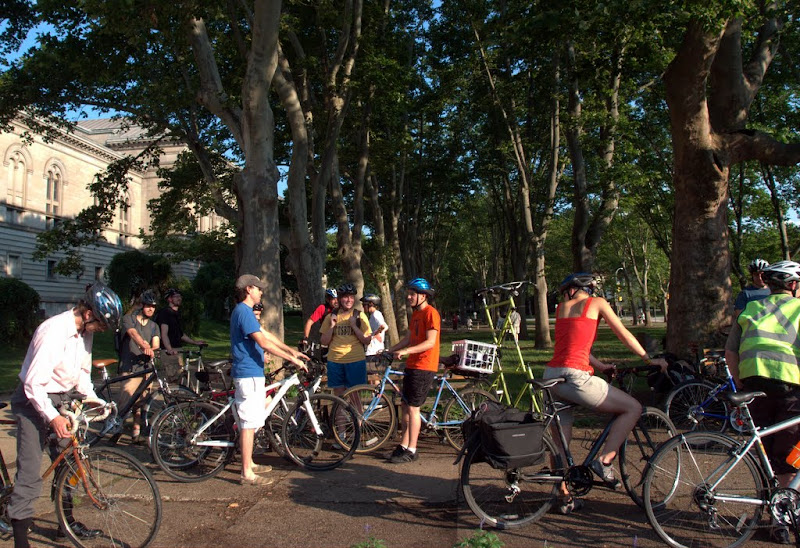 Rich, that’s sucks. I was wondering what happened. Once you said you never had a flat, I had a bad feeling that it would last long.

It was nice of you to give up to tube to Mark though.

We can still blame Ian for putting Mark on a bum bike.

Hopefully next ride we will be better equipped to cover mechanical problems.

Rich, if you are who I think you are I feel kinda bad, I asked if you were OK and you said yes but I felt like I should have stopped anyways. I had a spare tube

Ahlir, same question as Stef. Maybe we could use some flock name tags…

I feel special being the newbie and having the privilege of meeting the mysterious Ahlir. He tends to keep a low profile kind of like Batman but even cooler.

I don’t recall anyone having a flat the whole time until I saw two people (then three, per comment above) got flats less than a mile apart.

I felt a little weird, wearing business clothes to a bike ride, but when everyone started getting eaten alive by mosquitoes at the picnic, I was glad I did.

And i certainly don’t remember seeing a monkey on a bike so I’m guessing that avatar is inaccurate.

Yeah I didn’t meet mr marvelous either, unless I have before and don’t know your real name? I guess I didn’t ask enough unfamiliar faces if they post on the board.

Hey, I’m lurking in the background in two out the three photos above. Apparently, I’m everywhere.

I felt out of place too, Stu. I was on the other side of the spectrum…all spandexed up. I think there were only 2 or 3 of us. I would say that it was because I was stopping of in the middle of my commute home… but truth be told if I even glance at a bike, I need wicking material.

Sadly, no one told me that when you loose a lot of weight, you don’t loose any of those extra sweat glands.

I’m next to jeg in the third one.

I tend to feel out of place at these because I’m out of shape…which is why I don’t really talk to many of you (also, I’m never really sure what to say to people. I’m much better at socializing on the internet). So if anyone felt like I was ignoring them or something, I wasn’t doing it on purpose!

We *do* need nametags apparently. I am also terrible at introducing myself. I’m pretty sure I saw myddrin, but after one case of mistaken identity where I said hi to someone who actually was not who I thought they were (which is one of my biggest fears, I’m so embarrassed when I do that) I wasn’t going to chance another… I did finally meet caitlin but only because I had a “positive id” from someone else saying hi to her.

@Salty, it was likely me if the person you are thinking of if it was a person w/ a Van Dyke off being unsociable or talking to Stu.

I am also very awkward IRL. Bad at being social, something I’m working this year as part of my new year’s resolution… but its hard to break 39 years of habit.

I’ve been trying since I moved to Pittsburgh (5 years ago). Not to discourage you, I am a lot better than I was!

I almost made it. But I think I used up my daily quotient of philanthropy by the time I got to Oakland.

@ Salty my avatar is of a Japanese anime mystical kung-fu master on a bike, that turns into a giant monkey when there is a full moon. Now picture that in all Livestrong spandex and you can’t miss me.