Is that for real? Repeat, is that for freaking real?!?

I did not make it up, seems quite credible, several posts on her Twitter feed. With all the social media, email, cell phone, cable, tv, radio, billboards, how did I not know about this?

It may be just as well. What would I have done with the info? What would the damage have been?

too bad she had not arrived ealier in the day, woulda been neat to have a celeb on the keg ride.

according to the timestamp of the tweet, there were still several riders from the return – return keg ride still there @ OTB.

I had never heard of this person before this thread. She is a beautiful calendar girl but what about her cycling? I found this interview with her from last year, which was an interesting read.

There’s a lot of Liz Hatch imagery, and there is a critique that her niche is getting to the front so her photo gets snapped with her jersey askew, but when I saw these pictures I figured there’s a cyclist in there, too.

I have heard of her for some time in the cycling world she is most known for her dramatic crash, advertising Road ID, and her magazine shoot. She isn’t a bad cyclist and has done fairly well. It would have been nice to meet a pro cyclist, sorry I missed her. One of the favorite pictures on russian cyclo forums (sorry): 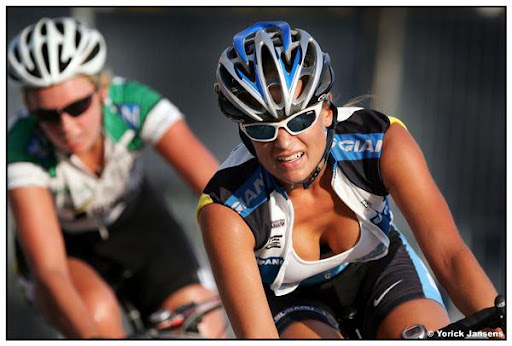 Her diary at cycling news http://www.cyclingnews.com/blogs/elizabeth-hatch

I would think that last picture is an example of some loss of aerodynamic efficiency.

The last picture is not how i have ever seen her ride. It seems if someone got the right angle and now it’s the only picture you find of her on a bike. 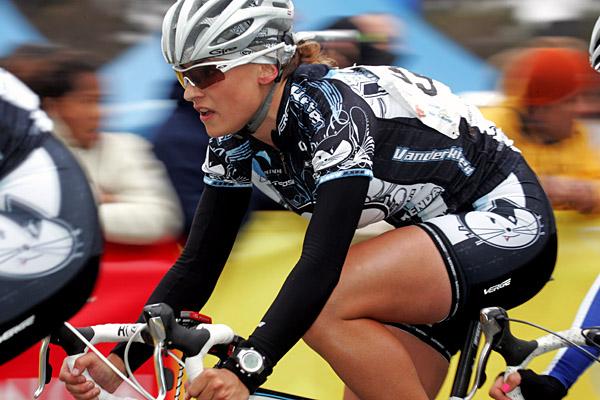 I can see why you are obsessed! I’d like a liz hatch hehe

No no that’s not it. Really, it’s that there’s a nationally known bicycling figure, a female euro-pro, in Pittsburgh, possibly every other weekend.

And I wonder, how do “we” (ie Burgh Bicyclists) exploit that for a benefit, which I imagine would be to help increase participation of women in local bicycling, and encouraging young women to ride bikes?

<soapbox> Because I see a need for a women’s cycling advocacy/support group in Pittsburgh. Something less edgy than Ovarian Psychos, something a little more than the Alfonsina Strada Auxiliary. < /soapbox>

I think I’d have about the same response if Levi Leipheimer was in town – at least, pre-confession, pre-state’s-witness Levi, and I don’t mean to go down that rabbit hole.

It’s just a Cycling Name presence in town, which is an opportunity.

Perhaps she’s practicing for the Dirty Dozen? That’d sure be a feather in her cap.

i was thinking the same thing, stu.

if this is the case, what little chance i had of accidentally placing will be even smaller.

If she is, Stef, make friends with her. You’ve got that CtC feather in your cap, and that’s not something too many women can say.

^Not something too many people can say, period!

Never heard of this broad

And she has never heard of you, shlump.

Do you refer to your mother as a “broad”?

Doxy. Never heard that one.

yeah, and moll is new to me as well

TODAY I LEARNED SOMETHING

I think moll was used in the context of “gun moll”. Bonnie was Clyde’s gun moll…..

When I put “American female cyclists” into the Google search engine, the first hit is “9 Sexiest Female Pro Cyclists.”

Why We Ignore Women’s Sports. Despite the generic headline, the piece is specific to competitive cycling.

Doxy is an antibiotic I prescribe sometimes.

I always thought moll came from “Moll Flanders”. Maybe overthinking that one? And I thought doxy had a definite lady-of-questionable-virtues flavor to it.

Wikipedia: “Moll” derives from “Molly”, a diminutive of Mary, used as a euphemism for “whore” or “prostitute” and attested at least since 17th century England.

So it predates Moll Flanders. I assume Defoe chose the name to reference the term. The name’s first use as a derogatory term dates from around the time of Moll Davis, a mistress of Charles II. Maybe it picked up its present meaning from her.

Sorry, talking like this since seeing Lincoln last night. BTW, if you want to hear the names of all the members of the House of Representatives in 1865, that’s your movie.

Another term I’ve heard for women in gangland usage is “frail”, a particularly inapt term here.

And she has never heard of you, shlump.

HelenS: It would be an honor to put the beverage of your choice before you at any occasion you might specify. Respectfully, V.

@pseudo It’s real hard to get girls into racing. There are many hypothesis about it. But I saw it back in Russia (per 50-100 guys in local competition about 2-3 girls), in France, and in USA.

My Grandmother’s sister –may she rest in peace–used to teach kids (boys and girls) how to make spinning wheels out of old bike parts. She was from a generation with a lot fewer options for women & always said repetitive fiber arts activities were great for lookin’ busy while secretly plotting to overthrow the patriarchy.

On the bright side: But this is Track and those people are very special

pseudacris, she sounds like a lady i would have loved to know!

random monday night hypothesizing, come up with but not thoroughly discussed with my gf: could it be that all sports, both men’s and women’s, are judged primarily through the eyes of men because men are the primary watchers of sports? the idea being that to men, men’s sports are competitive, and women’s sports are sexualized.

this, as a hypothesis, has not been researched at all, and so i have no evidence to back it up. it does seem to match up with the data i observe, though, shameful as that data is.

On topic, a blog post I wrote almost four years ago. [rant]