I’m running out of two-cents to add to these stories.

Boy, those comments are gettgin worse and worse.

I’m guessing that if bicyclists continue to increas the way they ahve the last 15 years, there will be a helluva backlash. “Extinction behavior” I think they call it.

I’m starting to believe that one of the frequent commenters on these articles “lost” the person of their dreams to a cyclist or something along those lines. It’s rather sad, really.

Also mentioned in the bike-share-is-coming thread, there was this article. Some of the usual suspects in the comments. I’m including it here so I can find it later more easily.

Ladies and gentlemen, I present to you the poster child of OpenStreetsPGH: Stuart Strickland!

“It appears to be a CMU student taxi startup.”

Found one. If I had more time, I would have asked to climb inside. 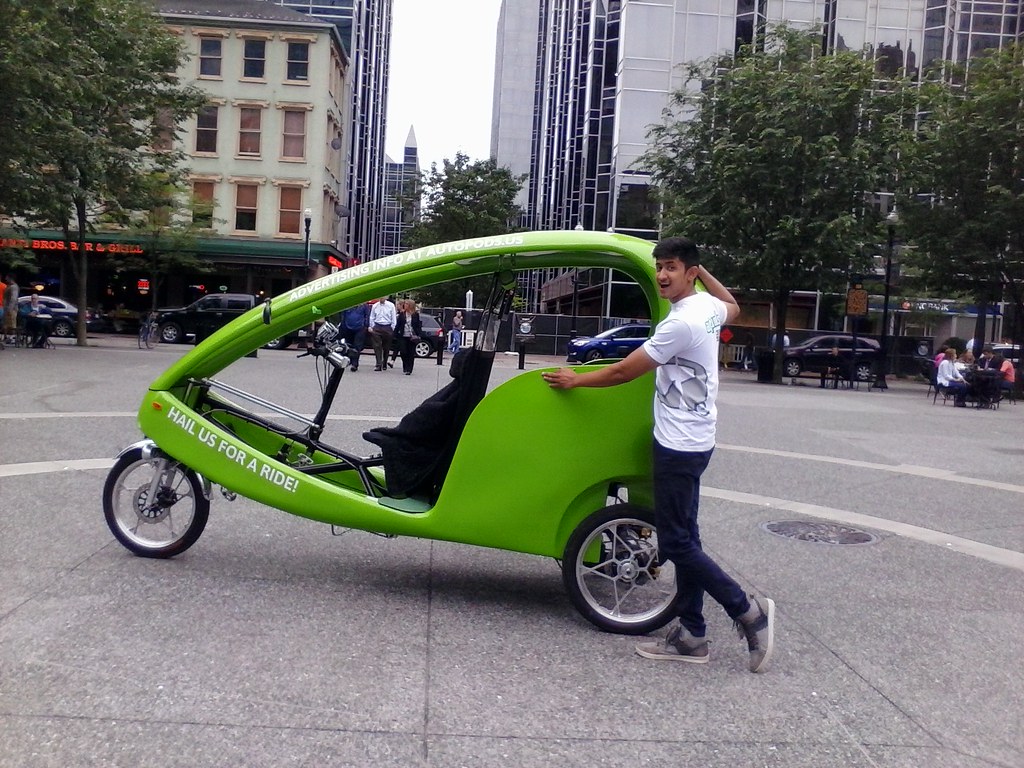 Ladies and gentlemen, I present to you the poster child of OpenStreetsPGH: Stuart Strickland!

I particularly like how his cycle, ankle straps and T-shirt are color coordinated.

More coincidence than anything. The straps don’t match, and the wheel I was on for the photo was one from Thick that I rode for less than two minutes.

Went past one of those startup taxi thingies yesterday on Ellsworth. I could swear I heard a motor. But who knows? I was headed in the opposite direction. (As a guilty pleasure, I enjoyed seeing the cars queued up behind it.)

This might have been posted already (I’m too lazy to check) but do these people have an URL? An app?

Autopods startup announcement on Reddit from spring 2014. It says their vehicles are “electric assisted and have a max speed of 20mph”.

Some have anecdotal evidence that it was bad for business:
http://www.post-gazette.com/opinion/letters/2015/06/03/The-Open-Streets-event-was-bad-for-business-in-the-Strip-District/stories/201506030149

Saw a poll about healthy ride on the PG site.

At least as of about 9am.

@chrishent The guy who believed it was bad for business made a point to say that his business was closed on Sunday morning.

I wasn’t there, but I have a hard time believing that food stands on the street didn’t do a good business.

Wow. The ND stories in the out-of-town-news story. Also9 it makes sense to me that distrtacted driving in Ontario is a $1k fine.

Next time I get in a car with this woman, I am going to insist that she makes any calls she needs to before we start moving.

@Mick, yeah I saw that, hence my mention of “anecdotal” evidence.

But all in all, business revenue during OpenStreets is a fair point to consider. Since the event goes through two major business districts, I think it’s fair to analyze the impact that it has on the businesses in these areas. Ultimately, if their owners oppose or withdraw their support for these events because of low revenue, then it becomes increasingly harder to hold them in the future.

We like to champion the idea that bike and foot traffic increase revenue. Hopefully there’s hard data from this past Sunday to back that up.

The results from the counters installed on the Penn Ave cycle track are in:

“The results from the counters installed on the Penn Ave cycle track are in:”

But I’m sure it’s really just a dozen or so riders with nothing better to do riding up and back, up and back…

That’s a nice number for starters. It’ll be somewhat better, I think, with healthy ride in full swing. What does it work out to be as a mode-share, do we know?

On its face, I would say it seems like a lot, but I don’t have context to place it. I’m curious about the patterns for use during the week and what comparable usage is in other cities for similar infrastructure.

^not to mention, the weather in May wasn’t exactly splendid. Anybody wan’t to start a pool on the June number??

Agree with @JZ that the number, while seemingly impressive, needs to be put into context. However, the number helps to quiet down, somewhat, the whole argument that no one uses the bike lanes.

Someone actually said that taking 24,000 trips away from cars actually increased pollution because the bikelane causes more traffic. Also, people of course accuse the count of being inflated because that would totally be in the interest of the PDP. Oy vey.

There is a weekly (as well as hourly) chart in the blog post – it correlates well with the weather, not so much with the day of the week (my rough estimate).

There was a spike on May 31 (about 2.5 times the average) but even without it the numbers would’ve been impressive (approx. 22,200 if you remove the spike).

Well,, let’s get real here. This is an outrageous eXagGerAtion.

I know for a fact that a rider here deliberately went over the sensor TWICE.

Not 24,000 as the mainstream liberal media has been trying to make us believe.

More on bike lane counts, this time from the Trib:

^I’m glad they are going to leave the bike counters up on Penn and it will be cool to see the data over a long period of time and weather conditions.

It would also be nice to have Car counters installed at the same locations to see how their volume changes in relation to weather, theater events, etc.

In addition to the above story, the radio show “the Allegheny Front” had a whole half hour of bike themed stories.

Today on Major Force ride we saw someone riding Healthy Ride Bicycle on Hollow Junction Trail/Saline. I would guess end point was South Side.

Ugh. What a deceptive title. At the meeting, they specifically said that handicap access would not be affected and no handicap accessible parking spots were going to be removed.

That thread is still going hot and heavy at 11 a.m. 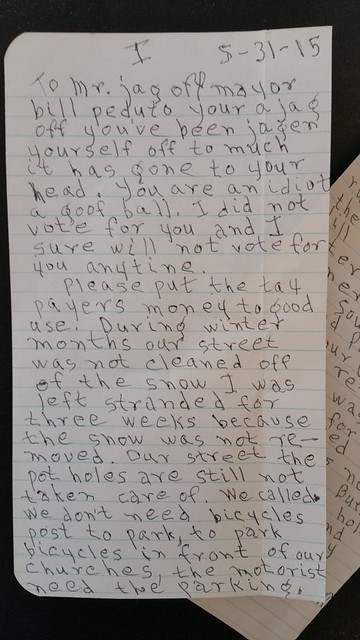 “Honey, how do you spell ‘jagging-off’?”
“I don’t know. Just like it sounds, I guess. You writing the mayor again?”