> Hope they install a nice new bold crosswalk at the crossing @ sennot street.

I suppose them installing both crosswalks across Bouquet, instead of just the southern one that was there before, is probably too much to hope for…

I mean, how long has it been since E. Liberty was re-paved? Still no lane markings.

S. Bouquet paved is great news.
I’ve had to go to a lot of effort to avoid it…

Someone in the comments section suggested stringing piano wire over a bike trail. I believe that is criminal behavior.

That’s why I took a screen shot right away and tweeted it.

Here’s WPXI on bike count. Is that photo from Pgh?
http://www.wpxi.com/news/city-of-pittsburgh-monitoring-how-people-are-using-bike-lanes/272155107

@Marko82: the photo is from Chicago: http://www.roadsbridges.com/multimodal-chicago-build-50-miles-bike-lanes-2018

Redevelopment coming to the River Walk Corporate Centre building (South Side terminal next to Frank Bryan concrete), with an extension to the South Side trail:

Was the bike/ped count postponed? I went by two intersections that were supposed to have counters and didn’t see anyone there (Main and Wabash in the West End and Smithfield and Fort Pitt Blvd. downtown). It’s possible that I didn’t know what to look for. Maybe they were parked in a car or something.

Stu said on Twitter that it was postponed because of rain.

Yes, today’s morning and afternoon counts are postponed until Tue, Wed, or Thu 5/17-19. Not doing them all on the same day means the relative stats will be weather-affected, e.g. if you count street A on day 1 when weather is nice and compare those stats to street B which was counted on day 2 when weather was rainy. hmmmm

The cancellation email went out around 11 p.m. I don’t think they’ll mind if I repost it here (from Clayton Oeth, clayton.oeth@pittsburghpa.gov).

Hello to all those scheduled to count tomorrow morning and afternoon,

Unfortunately, due to the weather predictions for tomorrow, we have decided to postpone the count times scheduled for 7am-9am and 4pm-6pm tomorrow.

We apologize as we know that many of you scheduled time out of your day to help us out. But we want to make sure you still get your chance, if you are able.

We will be postponing the Tuesday count until next Tuesday, the 17th, but we will also be giving everyone the option to count on either Tuesday, Wednesday or Thursday (17th-19th). The times for these days will be the same as the previous scheduled Tuesday time, both 7am-9am and 4pm-6pm. We hope this will give volunteers more flexibility in their available times, and hopefully some nicer weather!

If you also volunteered to count on Saturday, we are still planning on conducting that count as regularly scheduled, but stay tuned for updates.

If, for whatever reason, you are unable to participate at all next week, please contact Kristin or I, (kristin.saunders@pittsburghpa.gov).

Thank you again everyone for volunteering and for your patience as we’re sorting this out.

I do know they need a bunch more people to help count.

Corrigan Drive has had a bike lane on the southbound side for years. Perhaps they’re talking about adding a northbound bike lane too?

The current bike lane gets cyclists going in both directions, as well as some pedestrians. On the opposite side of the street there’s a protected path. That one sees more pedestrians and fewer cyclists. Some cyclists just ignore the bike lane (overdue for paving, and occasionally with vegetation and such intruding) and ride among the cars in the recently paved main lanes.

The main thing Corrigan needs is paving for the bike lane. A second one would be nice, I guess, but I assume it’ll still be used by people going whatever direction they want on foot or by bike.

Rumble strips will make it tougher for cyclists in the bike lane to move into the main traffic lane when it’s blocked by a dog-walker, a cyclist coming in the opposite direction, debris, or when some helpful agency has entirely blocked the bike lane with a Your Speed Is display.

I think the main lanes were repaved just a year or two ago (skipping the bike lane), so I don’t know why they’re repaving them now. (Where did they put the signs warning of paving work? One guess.)

A pittsburgh man – Eric Stauber – was hit and killed while riding his bike in Florida.

Random Acts of Kindness: A fall off a bike leads to neighborhood appreciation and a greater sense of community

More on the incident from WPTV: http://www.wptv.com/news/region-st-lucie-county/port-st-lucie/port-st-lucie-police-car-hits-kills-cyclist

Police’s story is that he was riding on the sidewalk and rode or fell off the curb in front of a local police car, which hit him.

Not mentioned: the road he was riding along is a 5-lane divided highway: https://goo.gl/maps/QHvZ9fjnG4D2

More on the Terminal Building (aka Riverwalk Corporate Centre) story that @chrishent shared earlier. Today, Essential Pittsburgh radio did an interview with a representative of McKnight Realty (new bldg owner) and Tom Baxter from Friends of the Riverfront, an important tenant there.
Listen here: http://wesa.fm/post/riverfront-trails-offices-and-green-spaces-planned-upcoming-south-side-development
The PG story: http://www.post-gazette.com/business/development/2016/05/10/Offices-public-green-space-trail-link-planned-for-South-Side-terminal/stories/201605100059

The architectural drawings look nice (as these things always do). They’re thinking of it like a short version of NYC’s High Line. Note trail drawn along RR tracks, and people walking around on ground level near river. 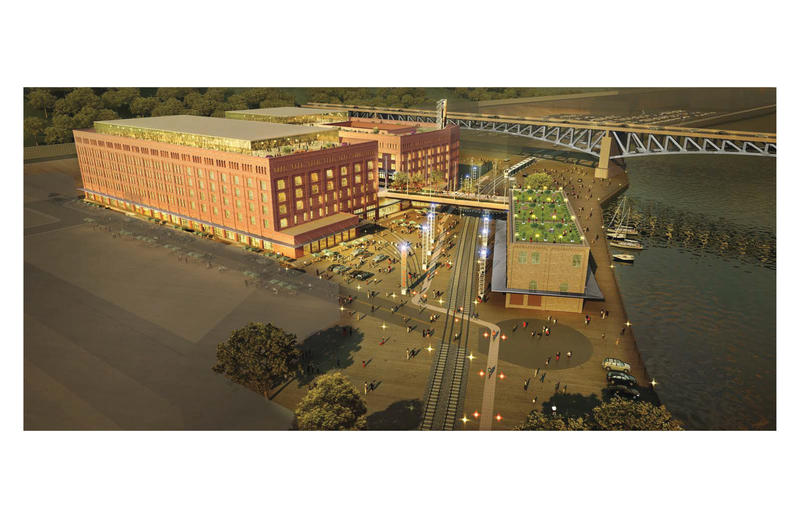 What about the concrete plant between the terminal building and the liberty bridge? Is that part of the development?

I’m hoping both are being redeveloped as that is one of the missing links in the riverfront trail.

I’ve not heard anything about the concrete plant going anywhere–especially since they just won the right to build a level crossing over the railroad between their yard and their docks–so i’m also curious how that’ll be handled.

I think they should be more realistic with these mockups / plans with respect to the train tracks and include the buffering fences that keep people from wandering on to the tracks.

Additionally, the trail really should be widened from their initial drawing here, should be at least twice as wide as the sidwalk shown, a single cyclists takes up over 1/2 of the space on the mockup.

Also, is there a way to access the rooftop parklet space from the trail level?

Yeah, it’s funny how those buildings are missing from the drawings. from what i know, the concrete plant will not be going away. they feel they have a very strategic location, ie the only (?) concrete plant in the city.

(They do apparently claim to be the oldest and largest in the area, though they seem to have only been on the south side since buying an existing plant in 1980: http://old.post-gazette.com/transportation/20031012gratacoltrans2p3.asp)

It is hard to trust the accuracy of anything in these renders if the concrete plant is going to remain. These depict pedestrian space where there is actually an industrial complex with piles of aggregate, an access road and a overhead conveyor to move material over the tracks.

So either the concrete plant is being demolished or the developer is being dishonest. I like the sound of the project but am dismayed by what appears be deliberately misleading development plans. The reason this matters is that they’re seeking a 10 million dollar grant from the state as well as money from Pittsburgh’s Urban Redevelopment Authority.

Indeed it is a very strategic location. Not only do they (Frank Bryan) have relatively easy access to most parts of the city, but the riverfront allows them to bring most, if not all their materials by barge, at a likely lower cost per ton than by truck. If I was set up there, I wouldn’t move away, either.

Also, there’s another concrete plant on Second Ave, near the Birmingham Bridge

“Also, there’s another concrete plant on Second Ave, near the Birmingham Bridge”

And it smells divine, especially during summer during the commute. Wonder how much particulate matter they’re producing?

The common factors in all three of those are: river, tracks, concrete plant. We do need concrete plants, and flat up against a riverbank and/or railroad is the best place to put them. It wouldn’t surprise me that there are a few more up and down the various river valleys, and if they exist, a bike trail or the plans for one will be right alongside.

So whatever the answer is here is likely going to be a probable answer for any others.

There’s also a concrete plant in lawrenceville by the river. 43rd street concrete. 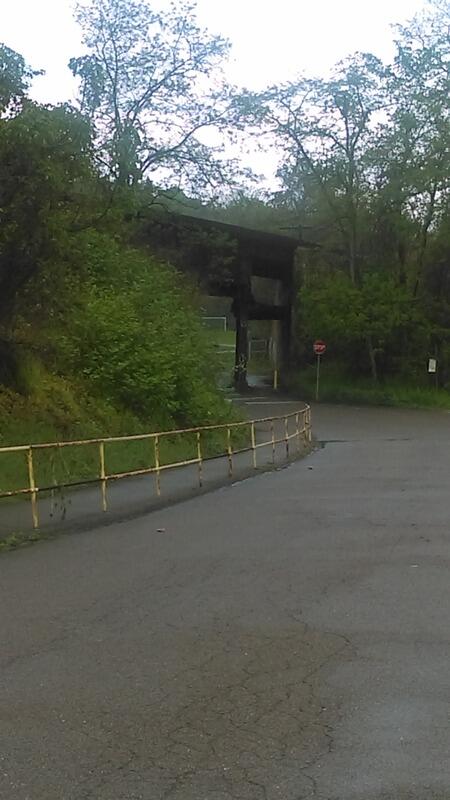 “I have made calls about this corner on Boundary Street as I live right there and have been witness to so many close calls between bikes, joggers, and dog walkers. I am asking for the community to also call and make this part of the trail safer for all. I am not sure what else to do before someone really gets hurt here. Thanks!”

Agreed Stu, this is actually a good location for a concrete plant. It’s in a warehouse district, almost under a bridge, between railroad tracks and with mooring for barges.

My criticism was directed at the developer who is seeking public funding with some misleading renders. Still, at first glance I am a fan of the proposal.

New guy sounds like he’s got a lot of work to do, but seems like he’s sharp and very aware of the issues he’s going to have to tackle. Hoping for the best.

ha! how could i forget about the one on 43rd. Duh i have to hear and dodge those trucks on the daily.

From what I understand, the concrete plant in the ss is there to stay. was just in a meeting where this came up with the Assistant director of public works. things do change all the time however.

i had the pleasure to organize a short ride to show the new penndot bike/ped coordinator around pittsburgh a bit. he’s legit and has a lot of good ideas and a practical approach to making things work better. it’s hopeful and really shows what can be done if you dedicate a person to focus on an issue. I just hope he doesn’t get ground down in the penndot machinery

@erok – A glance at the thread we put together to welcome Kristen Saunders might be worth a look by the state guy, too. Really, it wouldn’t be a bad idea to look this over at all, 18 months after we first put it together.

We were given the choice of Tue-Wed-Thu for the reschedule. Looks like Wed and Thu should be dry all day. I’m going to try for Wednesday for my count.