Ohhhhh, singletrack that you can bike to the trailhead?

I’m with Stu and Marko on this one. Here’s a chance to implement a grade-A connector to a seriously under-served part of the region.

bridging the RR tracks is way too expensive

How did they get the money/land right usage for not one, but two flyover bridges on the Steel Valley Trail near Kennywood? When there’s a will, there’s a way…

At becks run road there is no real need to bridge the tracks. They can just put a level crossing in. There just needs to be a will.

But a bridge would probably be easier to get cleared with the railroads and other authorities. I’m guessing state or federal funding would probably be needed to finance a crossing in the style of the GAP trail bridges between the waterfront and mckessport due to the high cost.

You’d pay more in legal costs for a crossing than steel for a bridge. And you still need to get across Carson.

And no, I don’t want a rickety sounding set of planks to get me up and over the tracks and road. Do it in style. At least as well as Hot Metal. Twice as wide as the Ft Duquesne walk/bikeway. Put a roof over it. Make the bike haters piss their pants with anger every time they drive under it. Gawdhelpus, a damned park, when we could’ve had a strip mine or a casino or another mall or something.

Looking at the terrain, I don’t see how the two issues are related. You really can’t get to much of the Hay’s Woods park starting from the area of Carson Street. The only entrance that connects to trails etc. is through Agnew Road on the other side. Otherwise you’ve got a pretty steep climb.
Connecting a bike route west from Beck’s Run & Carson, I think it would make more sense to go up Parkwood. There’s enough space for a decent path, with no traffic to speak of. And then, yeah, you’d have to get across Carson St & the train tracks. No idea how much that would cost.

I’m sure there are enough structural engineers in western PA who can give a thumbnail guesstimate of what it would cost to get 50 feet up in the air from the trail to get up and over tracks and Carson, and probably up again and over the second set of tracks above Carson.

Remember, every major intersection rebuild somewhere in metro Pgh is in the neighborhood of $10M. Decide that we need a park entrance more than, hmmm say, a triple left turn lane in Cranberry Twp ($7.2M, replacing an existing double left turn lane that’s at capacity about 30 minutes out of a 1,440-minute day), and then we can argue over construction details.

There is already a fire road from Becks just before Wagner that goes into the western end of the woods. I’d like to connect into that without having to go too far up Becks. I live about a half mile from the Agnew entrance & have cut up through that way a few times.

And yes, Agnew is the most level entrance into the area, and some of the ravines are quite steep to navigate so getting into one entrance doesn’t necessarily mean that you can get to the other areas easily.

Riverview Park also has an enormous climb to get up into it from river’s edge, but the circuitous road up from Woods Run Ave makes that a non-issue. Cannot we do something like that here?

Here’s an idea for a (hiking and possibly mountain biking) trail analogous to the trails in Emerald View Park on Mt Washington.
https://goo.gl/DHZ9Xr
It would connect Susquehanna St (a short, steep spur off Beck’s Run Rd) and Glenwood Bridge, traversing the slope of Hays Woods above the Mon and above the Norfolk Southern (upper) railroad tracks. Interesting note: this proposed trail goes close to the eagle’s nest.

I’ve crossed this path a few times but I’ve never attempted to walk this route. If a trail can be built on the slope of Mt Washington then a trail could be built here, also. 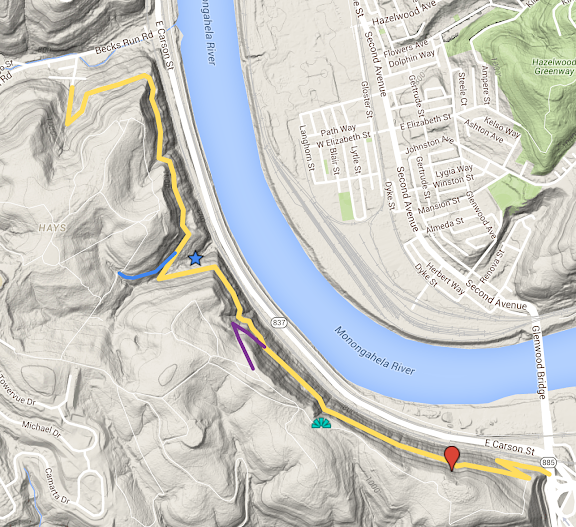 I don’t think it’s a good idea to put anything near the eagle’s nest.

Can we move any Hays Woods discussion to this thread https://bikepgh.org/mb/topic/hays-woods/#post-328355

How did they get the money/land right usage for not one, but two flyover bridges on the Steel Valley Trail near Kennywood? When there’s a will, there’s a way…

US Steel footed a big part of bill.

At becks run road there is no real need to bridge the tracks. They can just put a level crossing in.

it’s not going to happen. CSX lines are under heavy use. It’s a huge liability for them.

Seven injured, three critically, in collision at Liberty & Ninth that sends vehicles into Pittsburgh Popcorn storefront and through a bus shelter. Charges unlikely due to “accidental nature” of crash.

Sympathy for real people “unlikely” here due to high levels of snark.

I know someone involved in that crash. Have some decency.

The man says he and others have counted at least 45 so-called graffiti “tags” so far just between Sandcastle and the Hot Metal Bridge. He told Marty it’s upsetting.

But when they get to the bottom of the case, they say that the person responsible could face a $350 fine for each tag.

Any fine that totals over $4,000 makes the vandalism a felony which could result in harsher penalties.

WPXI of course is still using ‘accident’ to refer to this incident.

I think the charges in the Brandon Ortmann case are low-level because Authorities see him riding on the wrong shoulder for direction of movement as mitigating. But I can’t fault the PD – they staked out the driver’s house, found the damaged fender out back on his property, they really did invest in this. Major props to the Mother who would not rest until the driver was charged.

The driver is charged with two felonies and three “summary” offenses. How do you see those felonies as low-level offenses?

Jacob, I didn’t see five charges only three. May I ask, what are the charges and would you sort them by felony/summary? thanks in advance! VB

Take a look at the docket by finding the Pennsylvania Unified Judicial System website, then go to “Docket Sheets,” then choose the search function for “Maristerial District Courts,” then “Participant Name,” and type in the defendant’s name and whatever other information you have (it’s an Allegheny County case, for example). That will bring up the docket – which is a far more reliable source of information than the media.

Will Ortmann’s killer be fined more than the graffiti artist? Which one will be tried for a felony? Which one convicted of a felony by a jury of their peers?

@Jacob, the question wasn’t “how would you grade them”, it was “could you list them in order by grade.”

Please remember that not everybody has the same knowledge of or access to information you do….

Your first question can’t be answered; your second and third questions are not clear enough to answer. But if it helps, a defendant has a right to a jury trial on felonies and most misdemeanors, but not on summary offenses. A defendant can waive that right and let a judge decide guilt or innocence on all charges, which is a sound course of action in some situations.

That’s fair enough, but I don’t have any more access to information than anyone else. The Unified Judicial System website is a public website, and a very user-friendly one. That’s all you need to look at to figure out the charges, status of the case, etc.

Jake, thanks for your reply! I don’t in any way have a grasp of these things. I really do appreciate your expertise.

and informed by your answer: I should not have written that the charges were relatively low. Two felonies is a big deal.

thanks again Jake. It’s very good of you.

I, for one, will not miss dodging tour buses on Penn and roadies and dumpsters on Spring….

The driver accused of hitting and killing Brandon Ortman while driving on a suspended license & no car insurance, and then fleeing the scene, remaining quiet for months and then lying to investigators… is out on non-monetary bond. Must be because he is so trustworthy.

http://triblive.com/news/valleynewsdispatch/10643933-74/ortmann-chicko-police
A phone number for Chicko, who is free on nonmonetary bond, could not be found. He did not respond to a message through Facebook.

From the Trib sports section:

Lawrence Timmons rides his bicycle to and from the Steelers’ facility to his South Side home daily.

Timmons said his teammates question why.

“They don’t believe that,” Timmons said. “They say I have all those cars, and you ride a bike. It is kind of fun. I feel like Rocky jogging through the town being, ‘Hey, that’s Timmons, that’s Timmons.’ It kind of makes me feel good.”
http://triblive.com/sports/steelers/10644422-74/mitchell-bell-knee

To embed a Flickr photo, the link needs to end in “.jpg” an should be embedded in an IMG tag.

The hostel in McKeesport on the GAP should be ready for occupation in the next couple months according to the information I was told today.
Background:
http://triblive.com/neighborhoods/yourmckeesport/yourmckeesportmore/9332825-74/trail-hostel-mckeesport 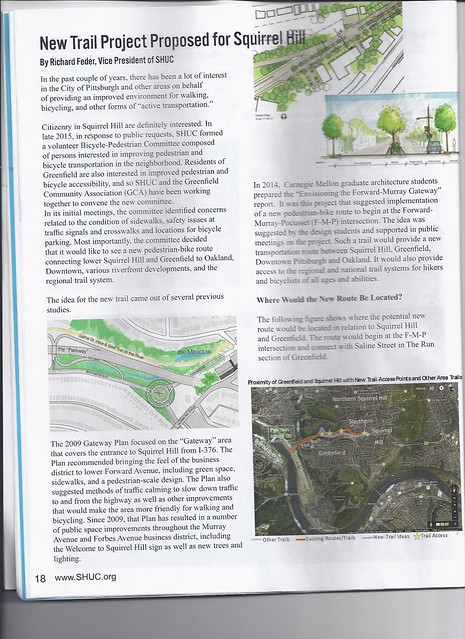 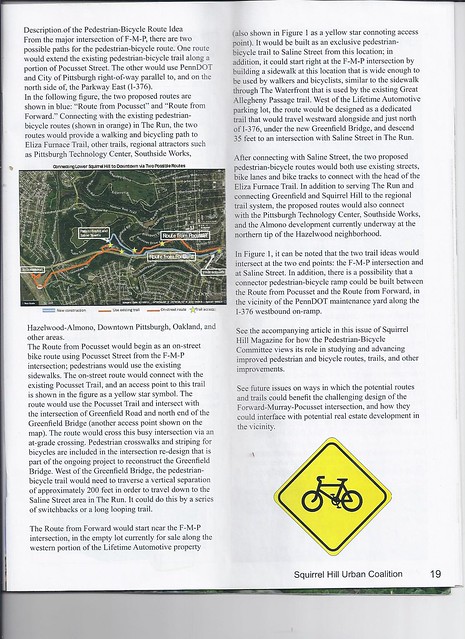 A Pine-Richland High School student hopes to bring the joy of riding a two-wheeled bike to children with special needs in the northern Allegheny County area.

There’s a discussion on the KDKA facebook page but I can’t figure out how to link to it.
https://www.facebook.com/CBSPittsburgh#

Surprisingly, the overwhelming majority of comments are in favor of the grafitti. I can understand some people not minding or even liking it. But they seem incapable of understanding that not everyone feels that way. If they woke up to discover someone had painted their driveway, house or car, I’m sure they would feel differently. Personally, I think this is worthy of a felony conviction. He spray painted in over 50 places.

I wonder if we got knocked out of the running by trying to wedge in that Uber project under the radar.

WESA radio traffic report commented that there was a car/bike crash this morning but I didn’t hear where (they mentioned bike at end of report so I wasn’t paying attention), and I didn’t find anything on news websites. Anyone know more details?