erok wrote:i just like this project on a pure urban design level

DPW reported Mackin Engineering Company will complete engineering drawings of the preferred design for the new Louisa Street steps. ...there are also near-term improvements planned. DPW plans to install a runnel, a narrow ledge that allows cyclists to roll their bikes alongside the staircase, and a stop sign on McKee Place at Louisa Street. 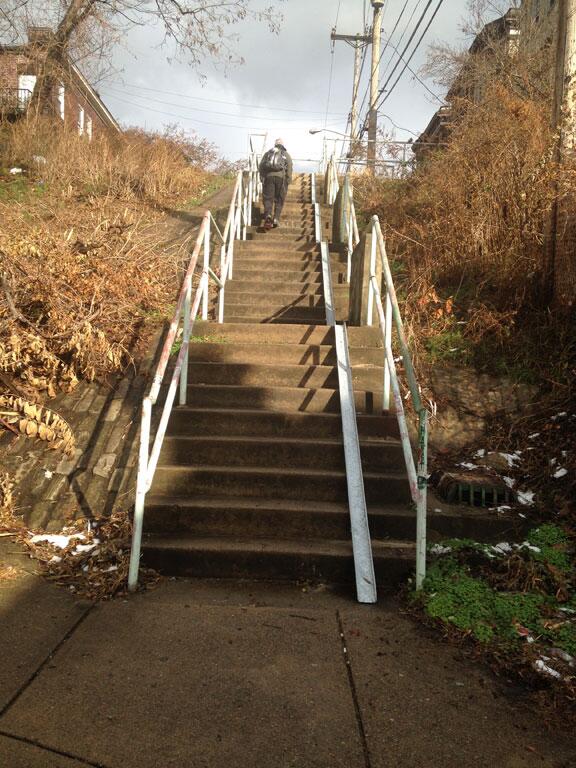 jonawebb
These would be great on the stairs around Keystone Metals/the Glenwood Bridge Maybe when I'm 70 PennDot will start adding bike infrastructure
sgtjonson
Adult Me wants to push a bike up that so badly. 11-Year-Old Me wants to roll a Hot Wheels car down that so badly.
stuinmccandless
It's hard to imagine anyone using that other than to show they can. It's a shame it couldn't go someplace useful. Like Pierce says -a t the end of the Glenwood bridge would be great.
mick
Hell, 11 yr old me wants to ride down it.
edmonds59

Louisa is the only street south of Forbes to run all the way from Atwood to Halket. Putting the runnel there to make the street more accessible to cyclists actually makes some sense. And since this is, I think, the first runnel in the city, a short set of stairs is a good place to start.
jonawebb

edmonds59 wrote:Hell, 11 yr old me wants to ride down it.

so does 36 year old me.
cburch
I really like that the city is trying out a few things here. By trying them in an out of the way location it will allow the designs to be tweaked and refined without an instant backlash and letters to the editors. Of course it won’t get as much use here either, so I think it is important for cyclist to go out of our way and try it out and give feedback. BTW, is the runnel installed right? Pulling up some photos on the google shows it’s more often located way over to the side - almost under the railing, or in the middle of the stairs from side to side. In its current location it looks like it would interfere with a person walking up/down the right side.
marko82
they were probably wary of the high railing interfering with handlebars, but didn't want to "block" the staircase by putting it in the middle.
cburch
I used it a couple days ago, going down. I actually found it quite difficult, though the fact that the steps were covered in ice didn't help. It's too close to the railing to be able to get between them, so you have to lean over the bike to reach the railing, or hold the bike and not the railing---but the ramp is so steep, the bike tries to run away, and the steps are so covered in ice, I felt like I was going to fall if I didn't hold on. It was very hard to fight both the ice and the weight of the bike at the same time; I ended up leaning the bike over against the railing, grabbing the seatpost under the saddle with my right hand, and holding the railing with my left... it felt like it would almost have been easier to just carry the damn thing. Also, there's no ramp across the landings, so if you're not holding the 'bars, the bike will try to steer one way or another away from the ramp.
epanastrophe
hold the saddle with the left hand, squeeze the rear brake with the right. instant semi-mobile railing/steering and speed dampened bike. it works hiking down trails in the woods tat are considerably less friendly than tis set up so i assume it would work well here too.
cburch
Please continue to give feedback here. DPW wants to know what people think and if any tweaks can be made. specifically, if they did move it closer to the railing, would it still work?
erok
I might use this tomorrow for fun. As it stands now, it looks like I'll have to use it at a slight angle so my panniers don't rub up against the rails, so if it were further against the rail, that would be even more an issue, but I'll test it to see I agree that Louisa doesn't look like much of a thoroughfare, but it would be cool if it were closed off to car traffic and used as kind of a ped boulevard, kind of like market square, minus the annoying traffic going pointlessly around the circle
sgtjonson
@ Buffalo Buffalo Were you going anywhere that this was a good route? Or were you just doing it to do it? I'm not asking this to be snarky. (or, more accurately, I'm not asking this JUST to be snarky.)
mick

Mick wrote:Were you going anywhere that this was a good route? Or were you just doing it to do it?

I was going from work (in east Oakland) to a show at PPU's Pittsburgh Playhouse on Craft, so while it wasn't the most direct route (since i still had to get around the hospital), it wasn't entirely out of the way, either.
epanastrophe
When are kids gonna destroy it grinding down it on skateboards/fruitboots?
rice-rocket
i just checked it out today. it could be moved in a few inches, but don't really think it's all that necessary. going down it, i found it fine to just hold onto the seat and walk down the steps. i didn't have to battle ice on the steps tho.
erok
I used it on Friday and say it could be moved a couple of inches out more. With my panniers, first they rubbed the rail sign and then would rub the concrete. It was easier going up than down, but I only have a front brake ATM. As far as Louisa St goes overall though, I'd like to remind people that one of the Louisa cross streets is where our first (I believe) Pittsburgh ghost bike was placed. I think Louisa st still gets a lot of commuting cross traffic
sgtjonson
Upon rereading, I think Erok meant "move in" as in away from the rails, whereas I said "move out" meaning moving out from the rails, but essentially we're saying the same thing. Move the runnel more towards the center of the stairs. But I also agree that it's not really a big deal if it isn't moved. If I were using it everyday, I might be more keen on it being moved, but since I don't, I'm like "eh"
sgtjonson
My pedals kept hitting the flat sections of sidewalk when pushing my bike up on the louisa st stairs, it's a bit easier than carrying my bike though. Not really sure that much could be done about that though.
benzo
Blue lines are stairs, red is the path... you can figure it out.
benzo