can we get a bunch of these stickers? I feel a bit of morbid curiosity about what kind of lock was used…I am always hoping it’s not a U-lock because to me that would be some kind of indicator that the thievery has escalated in P’burgh. But, I think you make a good point, Pinky. Not as bad as asking an assaulted woman what she was wearing, but….

I think you could hear “it was locked with a U-lock” soon. I’ve seen some really, really, really cheap U-locks around town lately.

They look like this. Amazingly thin and cheap looking, with what appears to be a hinged shackle. From the specs: 12mm diameter shackle.

I am curious to know how a bike was locked and what t wrong. I can see where saying cable locks suck puts salt into the wounds. It also seems that most stolen bike posts are from newbies who don’t seemed as informed, like my coworker who had a bike stolen so she got a “really thick” cable lock to make sure it doesn’t happen again. I did tell her to get a u lock.

But since I don’t know what to say I just don’t say anything and just look for their bike.

Just to be clear – I’m OK with asking what kind of lock was used. I think it’s a good idea to hear the level of bike thievery.

For example, I use a giant U-lock, because I’m confident that nobody in Pgh is using jacks to break them open. But if I were to hear that change, I might rethink my lock options.

It’s more the follow up about why the locking choice was bad that troubles me.

Though mr marv, you make a good point – there’s an opportunity for education here. Trek in Robinson sells cable locks only, so clearly people are going to think they’re OK.

Does it seem less snarky to point victims to the top of this thread, where it clearly says that cable locks are bad and gives other good tips?

my coworker who had a bike stolen so she got a “really thick” cable lock to make sure it doesn’t happen again. I did tell her to get a u lock.

FWIW, the post at the top of this thread suggests cable locks are OK if they’re thick.

But I haven’t seen any particular snarkiness in posts explaining what locks are best. There’s implicit criticism, but I think that’s unavoidable.

If the victim responds that they used a cheap/vulnerable lock, I think sympathy goes a long way while pointing out their mistakes in the same breath.

Maybe something along the lines of: “That sucks, I’ll keep an eye out for it. By the way some locks are easy to break into. It’s a good idea to invest in a bla bla bla.”

Some real facts about ‘U’ locks.

I worked at a shop, and on various occasions was asked to remove a ‘U’ lock. — yes these were verified owners —

I wont give complete details, but outline a few things to think about.

You could, I haven’t tried this in a while so the lock mechanisms may have been changed to resist or stop this, break open a ‘U’ lock’s locking mechanism with a hammer and some other materials. This takes seconds.

FYI the entire industry pretty much ditched the easy to break cylinder locks once the videos of how to defeat them with a pen and hammer went viral five or so years ago.

It might be a bit cutthroat but I subscribe to the “more of a pain in the ass than the bike next to me” method of locking. Once we start getting more professional thieves and its no longer mostly a crime of opportunity ill need to rethink this.

+1 cburch. I endeavor to lock up next to a nicer and less secure bike than mine is.

I guess it’s nice to hear remorse, every once in a while.

Here is a nice piece of overkill spotted in Chelsea last weekend. 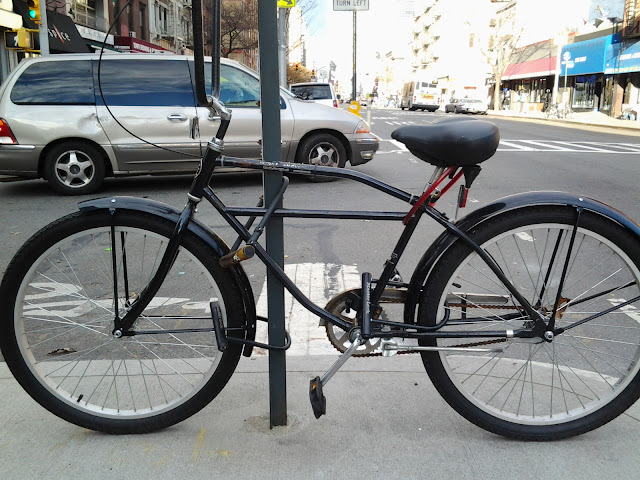 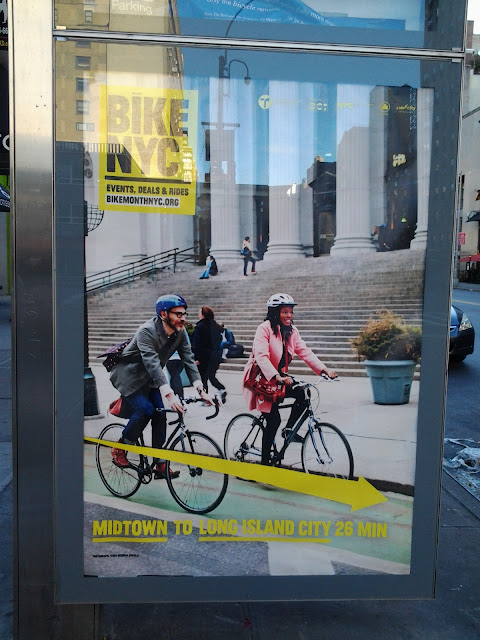 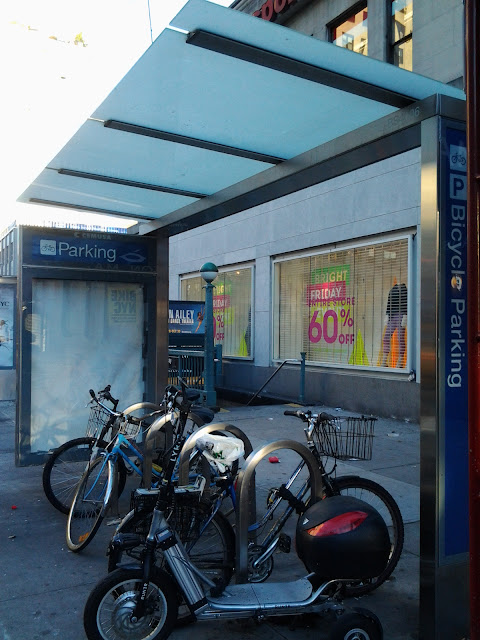 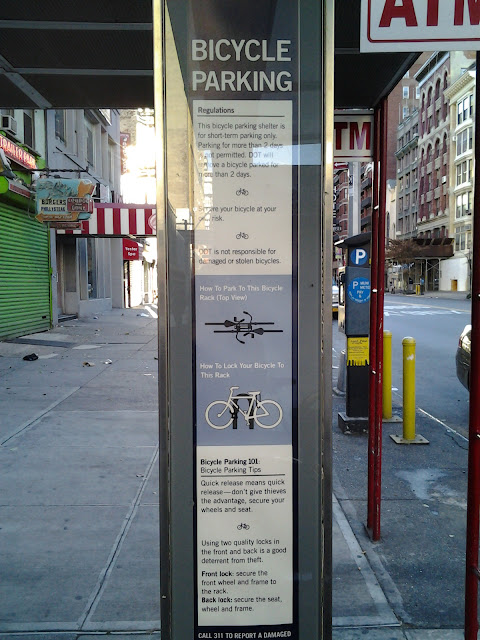 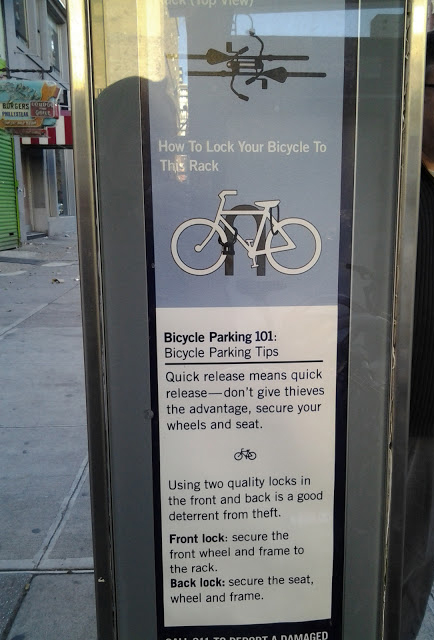 @Pseudacris, I don’t think there is such thing as “overkill” when locking a bike. Whatever it takes as far as I am concerned. Also, have a look at that sign you posed on how to lock a bike. Pretty impressive with two U-locks. Like that sign showing Midtown-Long Island with time included. Cool!

The cost and weight of those locks starts to compete with the cost/weight of the bike if you ride an old 80s bike.

Lots of 80’s bikes are worth well over a grand. Some are worth over $2k. Anyway, that part doesn’t matter that much, it is the fact that you are keeping your transportation there when you return to it regardless of value to others.

After seeing that stripped down bike in the South Side, it is making me wonder about how I am locking my bike. My seat isn’t locked, so that might have to be part of the process now. People can label it “overkill”, but I don’t want to give a thief any edge. They deserve no gifts that is for sure.

Thanks for posting that information.

Re; just seats, for Pgh, removing a quick release if you have one and replacing it with an appropriately sized bolt is probably adequate, unless you have some expensive seat like a Brooks or something.

i always liked the method of using a chain tool to lock an old chain from your saddle rails to one of or both of your stays, often times wrapped with an intertube to reduce rumble damage ^this. By far one of my all time favorite locking methods.

Very often you can snap a chain by hands if push “across” it.

Didn’t Steeve Reeves do this in a movie once?

I was surprised to see this Friday afternoon: 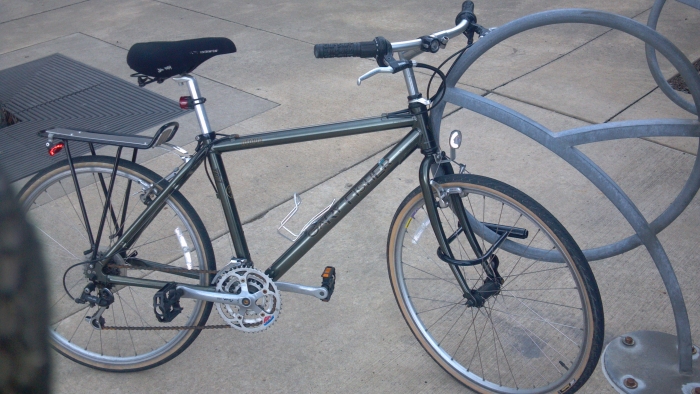 It’s such a nice bike and so well equipped, that seems incongruous with the locking technique. It’s a QR front wheel, so you open the QR, lift the bike out of the U-lock, and carry the bike (sans front wheel) away.

It’s such a nice, clean bike that I wondered if it wasn’t a Candid Camera bike-theft-sting thing.

Honestly, I’ve given up on leaving notes on bikes to warn people against poor locking. I’ve seen many chain locks around handlebars at CMU, and at this point I’m considering them cannon fodder for potential thieves. Some are amusing, like the one that’s only locked the back wheel to the frame, yet still pushed into a rack space. That rack is a couple feet away from the street where it could be easily tossed into the bed of a truck.

I moved a bike at CMU last week- it had a U lock through the rear wheel, sticking out the back on the ground. Front wheel was in the rack. I moved it to the next rack up as it was sticking out into the sidewalk.

I lock my bike with a small NYC lock and a huge chain with a separate lock. They have to cut/break two large obstacles. I am sure it is overkill in Pittsburgh and probably even overkill most places, but I don’t want to be that person that has his bike stolen when and if theft technology increases. My bike was targeted once before these two locks and I got lucky because someone saw them trying to steal it and other bikes. They got two bikes that day. I vowed never to be at any disadvantage again. Can my bike still get stolen? Sure, with an angel grinder or some fancy cutter, but in that case, there isn’t much I can to do.

I know it’s just a typo but I really like the idea of an “angel grinder”.

“Every time a bike bell rings, an angel gets its wings. And every time a car horn honks, an angel grinder disposes of another angel.”
– It’s a Wonderful Bike, 1947 (the little-known sequel)

Fresh angel on your salad?

Just when I thought I’d seen the worst possible lock jobs, I saw this one in Oakland earlier this week. In case it’s not obvious, it’s a cable lock around the rack and then around the top of the seat post.

Here is my guess on that one in Oakland around the seat post. I have a feeling that isn’t that person’s lock and he laid his bike there for a few minutes and dummy locked it, to make it look like it was locked for a moment. That is just a guess. I don’t think anyone smart enough to cycle would lock a bike that bad. Remember, we are… well a bit more advanced.

If you are going to take the time to wrap the lock around the rack, you might as well at least “dummy lock it” through the frame as well… I’m not buying it gg.

found this online somewhere, still a pretty good example of what not to do.

Drewbacca wrote:If you are going to take the time to wrap the lock around the rack, you might as well at least “dummy lock it” through the frame as well… I’m not buying it gg.

Nah, I am saying the lock was left there from another cyclist because maybe they park there all the time and just leave the lock there, so the bike you see in the picture just threw the lock over their bike to make it looked like it was locked when they ran into some shop or something. I thought about doing that once, but ended up taking my bike in the store and no one seemed to mind.

Fair enough, I didn’t consider that someone else may have left the lock behind; that’s at least *almost* plausible! :p 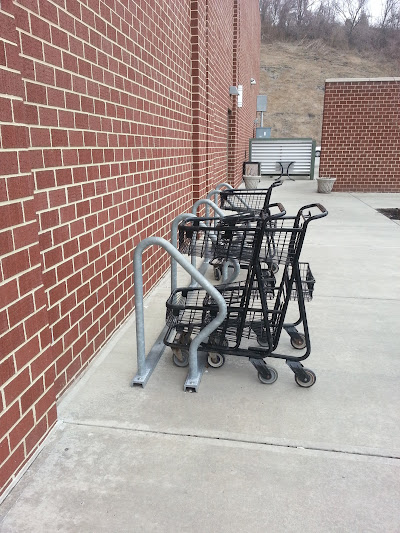 (Edited to fix my dumb typos.) Take a good long look. Something is seriously wrong here.

Saw these outside of the 3PNC/Fairmont parking garage. Newly installed, I have never seen a post like this. I started this album over on the Thick Bikes Facebook page: How Not to Lock Your Bike.

Shaming people hasn’t seemed to make much of a difference. How do we really teach people to lock properly?

Elmo wrote:Saw these outside of the 3PNC/Fairmont parking garage. Newly installed, I have never seen a post like this.

Why can’t we just have bike racks that look like bike racks? I don’t even know if my ulock would fit around these things.