FWIW here are two photos I took standing next to St. Colman’s Catholic Church in Turtle Creek. The Mon-Fay extension, if it’s built, will pass right by here.

The first photo looks northeast. The highway in the foreground is the Triborough Expressway. The extension would cross this and go off to the left.
The second photo looks southwest. You can see the arches of the Westinghouse bridge, under which the Mon-Fay would pass, in the distance.
The plans are to build the Mon-Fay on 90′ piers through this section. There’s a shopping area to the right of the first photo that will have to be reconfigured. The apartments in the second photo will be condemned, I think.

Already done. See the link to videos in the Turtle Creek Rail Trail thread. There are a couple of points where we talk about the MFE, as it would cut across where we were riding on Saturday.

PG Editorial Board comes out against the MFE extension:

Even some lawmakers in the Mon Valley are coming out against it.
Trib story, June 1
Rep. Ryan Warner, R-Perryopolis, in a statement called the Monroeville extension “wasteful” and said it “makes no sense economically or logistically.”

I rode through where it might run yesterday. It’s a little piece of country in the middle of the eastern suburbs. Very pleasant. There’s a creek, some quiet, lots of scenery. A great blue heron must have a nest there someplace (I’ve seen it fishing). To get there: head out Churchill lane from Beulah and the Parkway, down to the left on Harrison, bear right on Thompson run.

here’s a pg story on the same issue.  Not as black and white as I thought.  Most of the signers of this letter are Republicans, and their responses range from “waste of money” to “project is pointless without the pittsburgh extension.”

One of them even intimated that without the Pittsburgh extension it may be harder for the state to win eminent domain cases.  I’m unclear why, but maybe in some way the contracts were written or because of a modification of the original project?

They also seem to be focusing more on the southern beltway and supporting that instead.

So while these 11 are opposing it, it isn’t for the “building more highways for cars that just begets more traffic jams” reason.

Ugh. Meanwhile, the communities along the proposed route will never develop because of this looming threat. Kill this thing and let’s move on already to modern ideas.

Meanwhile, the communities along the proposed route will never develop because of this looming threat.

It’s true. The communities along the route, like Turtle Creek and Braddock, get negative benefit from this road. There’s no exit, and you have these giant concrete pillars carrying highway traffic. As Turtle Creek Mayor Kelley Kelley (!) said, “We’ll become a town people drive over.”

PG editorial board comes out against the MFE (again):

It’s true. The communities along the route, like Turtle Creek and Braddock, get negative benefit from this road. There’s no exit, and you have these giant concrete pillars carrying highway traffic. As Turtle Creek Mayor Kelley Kelley (!) said, “We’ll become a town people drive over.”

Not only that but why invest in a community now that might be wiped out in 10 years? That threat has been looming over these communities since what.. the 60s?? Or why buy a house in a community that is next to the planned highway?

There are still people who want the Hazelwood-Oakland section built.

True.  But if you think the Monroeville section is expensive, try the Pgh leg.

It would also require the Pittsburgh mayor to sign off as part of the environmental review. Not happening.

Can anyone comment on how much (if any) housing for the poor will actually be lost in connection with this leg to Monroeville? I haven’t studied it but I assume it will not be cutting through any country clubs or 500k housing plans, but rather will affect real estate at the other end of the spectrum.

Not with the current mayor, but wait a few decades for them to finish the leg to Monroeville, notice that nobody in Morgantown actually wants to pay a hefty toll for a quicker route to Monroeville, and watch if that leg to Pittsburgh isn’t somehow back on the table.

There’s some low income housing, I’m assuming, in Turtle Creek that this will pass over. Near St Colman’s. I don’t think there’s much up Thompson’s Run. Don’t know about across the river.

Wouldn’t a busway/bike Lane/reversible HOV lane be a better thing to implement than a highway through Braddock? A highway is the last thing the people of Braddock need running through their community!

Nobody gives a damn about reason, logic, local need. They want to build their highway. They’re on record as saying they will fight for the project mile by mile if necessary. 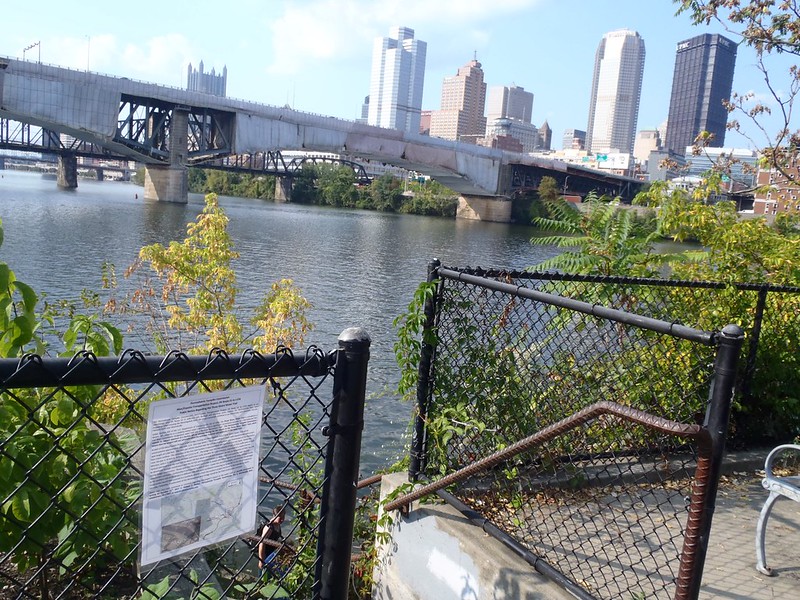 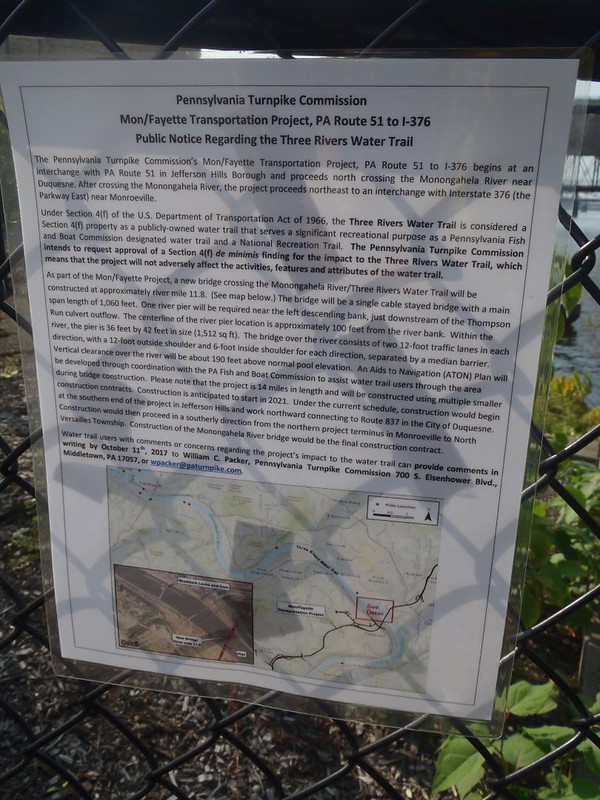 When is the Liberty Bridge sidewalk going to re-open?

Interesting in that the water trail (ie recreational use of the river) is being impacted by the MFE extension and triggering the notice, not any of the surface trails.

As for the liberty bridge probably no sidewalks open until phase v done summer 2018.

The zombie will not die.

So yes, the Mon Fayette Expressway has not died at all, it just shifted the planned route from going through Braddock to cutting through other municipalities like Duquesnehttps://t.co/895O1UrZob pic.twitter.com/YJQKPsMFx0