There’s also the dude who finished on a unicycle last year.

There’s also the dude who finished on a unicycle last year.

Buck, on this board, I believe.

dont forget the rusty chain. i hear that is the true experience.

also, let’s not forget this guy: 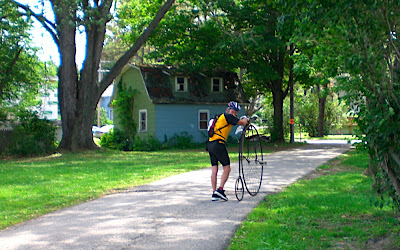 and make sure to work at least 27 hrs. in the 48 hrs. previous to the ride like I did last year. it’s truly a transcendent experience…

So you guys want to stay up all night in Edinboro? I’ll bring a bucket of coffee grounds.

After careful consideration, and mostly establishing I might in fact be crazy, I think I would like to do this ride. The MS website though seems a little sparse on details, and I get nervous about trying out new things without knowing what to expect.

There’s a route from somewhere near-ish Pittsburgh, and then it goes up to Erie. There are rest stops, and police directing traffic so we don’t get run over.

But I hear something about teams, and something about camping, and I just don’t actually know how this event would look for the participants. Can someone who’s done it before give me a play by play?

This MS ride sounds delicious. If I want to do this, then I have to practice eating without napping afterwards. The biking seems secondary.

@nochasingiguanas – it’s been a while since I’ve done it so some details may have changed. I remember being pretty nervous my first time (it didn’t help that the friends who were going to ride with me bailed), but it’s really very low key and a lot of fun. I remember having random conversations with people along the way – with 1500 riders there’s going to be people going at your pace regardless of what that is.

I haven’t ridden on a team before but I think it’s just a social/fundraising thing – as others have said it is definitely not a race.

The starting line is in Moraine which is ~40mi north of the city. Basically you just show up in the morning and start riding, it’s like joe said. There are rest stops every 15 miles or so with food/drink and restrooms. There is traffic on the roads, but most of the intersections are blocked off (it used to be a motorcycle club that did this, not the cops, not sure if that’s still the case).

You ride about half the distance each day, and stay overnight at Edinboro, you can either pay for a dorm room or camp. I’ve always gotten a room, but if you will camp they will transport your gear. At the end, you jump into Lake Erie, get something to eat, and catch a bus back to the starting line.

How do we get to Moraine? Can you…bike there easily?

We would love to sponsor this team this year. I’ll get a designer on making some T-shirts for it. Sorry we can’t afford jerseys.

How do we get to Moraine? Can you…bike there easily?

we usually set up a carpooling caravan from Thick for everyone that can’t or doesn’t want to drive out to the starting point. Since the Thick van is also a sag wagon, it works out pretty well and there is always transport back to the shop after you get dropped back off at the starting point at the end of the ride.

Since the start is at Moraine, there’s camping up around there, seems like some ambitious souls could could ride up from town on Friday and amp it up into a 3 day thing. eh?

I was thinking that too. Do you want to? I’m in.

Since the start is at Moraine, there’s camping up around there, seems like some ambitious souls could could ride up from town on Friday and amp it up into a 3 day thing. eh?

That strikes me as a good idea.

Would anyone be into hanging out in Erie and then biking back? That could come close to making it a week-long trip.

The idea of taking a “bike trip” where you go as far in motor vehicles as you ride sticks in my throat something awful. It’s beyond the rational objections with me, I think.

The idea of taking a “bike trip” where you go as far in motor vehicles as you ride sticks in my throat something awful. It’s beyond the rational objections with me, I think.

I think it’s worth it, based on my own anecdotal evidence. The MS150 was what introduced me to cycling a few years ago, and now the bike is my primary mode of transportation. A few wasted gallons of gas back then is now saving me quite a bit.

I’m sort of with you Mick, I like to ride out my door whenever possible, and I’m sure not going to defend petroleum. But if one person, who only rides the MS once a year, sees people on bikes on the road commuting, and gives them a little more leeway on the road because now they can relate, that’s a fair trade for some oil.

Anyone interested in making it a round trip? Im looking inot renting a cabin on the lake for a couple days, then biking back. There will be a least sleeping bag space for anyone interested.

I didn’t mean to get judgmental about the event. I know it does a lot for biking – and for MS, too.

I can’t afford the time away from work, so I’m out.

I’ve committed to doing this with the ex-dcsg, now “champions” team again this year.

Ditto the comments about it being on-competitive, except for the idiot in the pickup truck who just HAD to honk at me and then pass on the double solid during the long, slow, stop-and-go single-file 3mph slog through Moraine SP. Apparently, the three empty car lengths in front of me offended him. Then he pissed off the parking lot guy by not parking in the right place, and so he didn’t actually beat me to the registration desk after all.

Just proves that being a cyclist is no sure guarantee against being an ass.

I do like the idea of staying over and biking back, though I can’t commit to that yet.

A few questions for past MS150 riders. Does the group ride together or get strung out over the course? What’s the average speed? What percentage of riders choose 100&50 vs. 75&75? Are you obligated to stop at all the rest stops or can you skip one (or more) if you’re not feeling like stopping at that moment? Thanks!

it gets pretty strung out overall but there is always a group nearby to ride with. the ride is just too big for either of these conditions to not occur.

there is no 100/50 option or 75/75 option. day one is either about 80 miles or 100 miles if you choose the century and day two is always 70 miles no matter what. the century option is an extra 20 mile loop tacked on to the end of day one’s course, everyone winds up at the same overnight spot.

you can skip every single rest stop or stop for an hour at every single one, its up to you. i’d recommend a happy medium between the two.

The first rest stop is very shortly after the start, around mile 12 or 15. I think it’s for people who realized they forgot something like air or water.

I recommend skipping the first stop since it’s always PACKED and not really worth the hassle.

Heres hoping I don’t mess up my knee 60 miles into day 1 and have to pedal with one leg again.

I’ve been broke to register, but donation checks are in a drawer… did I read correctly that registration ends April 5th? (or what’s the deadline?)

Just want to know if I should rush to the bank and what have you in the AM to take care of it all. Really looking forward to this, as well as Tour De Cure.

There’s a discount for registering before 5/1.