Hio! I just got back yesterday from my DC to Pgh ride and I’m already looking to plan next year’s adventure. Now that I’ve gone both directions on the GAP and C&O, i think it’s time for something new. I met a guy on the trail that mentioned biking the Natchez Trace Parkway from Tennessee to New Orleans. Anybody on the forums here ridden it, or hear about it?

I rode most of it in March. Great route, a bit of elevation work compared to the pgh-dc ride, lots or redundant grade. I really enjoyed it and i’d do it again. You prob want to ride south to north to get a tailwind.

I don’t know anything about it, but keep me in the loop if you are looking for riding partners! :)

I would want to read a history book (or two) about that road before riding it.

I don’t know much it, but I do know it is one of the oldest roads in the US, from when people would float their goods down the river on flat boats and use the road to get back home. Like during the Whiskey Rebellion times and such.

The Natchez Trace Parkway is a modern road built in WPA-times immediately adjacent to the ancient footpath. It doesn’t connect any major urban areas, so there’s no real through-traffic on it.

It runs from south of Nashville TN to Natchez MS.

It’s a joint-use road, most of it looks like this: 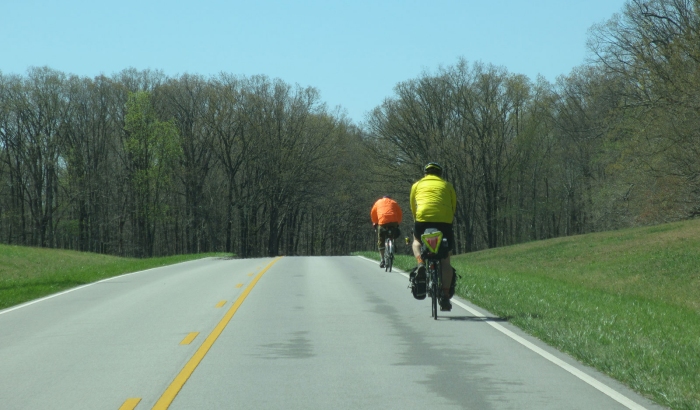 The National Park Service is extremely serious about the speed limit and about passing cyclists nicely. I’ve never been treated so well as a cyclist on the road. 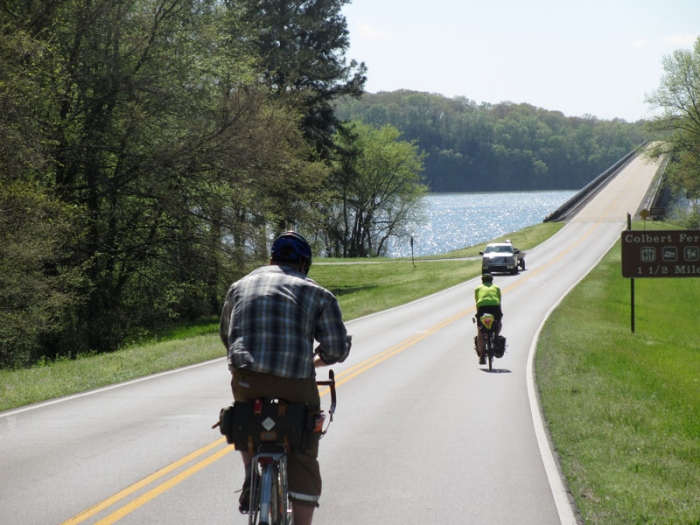 We camped, but there’s also a b&b economy along the route.

I rode down the coast from Seattle to San Francisco back in the 80’s- it was a magical month. The oceanside shoulder is a whole lane wide, most days it was a tailwind, no bugs at night, and the scenery was incredible. Other than an occasional logging truck in Oregon, it was a great trip- I would consider doing it again.
Farther than the Mississippi, but probably worth the trip.

hey thanks for the input! i definitely think i want to give it a go next summer. now wondering how to go about getting myself and my bike to the start of the ride in the south without spending too much money. husband already says he won’t drive me there, haha. he drove me to dc and it was rough. i’m not used to driving in fast cars and i spent the whole five hours or so panicking in the passenger seat! cars go soooo fast!

My thought for the next time I go is: drive my own van down to Nashville and park it. rent a car/van, drive it down to near-Natchez, turn it in. ride my bike back to my own vehicle.

it’s not elegant but it sucks less than any other notion I could come up with.

I’m reviving this thread since I’ve begun to plan my trip, thought i’d see if anybody had any more advice for me.

I’ve got a greyhound ticket to Natchez in june and I’ll be shipping my bike (which will be lovingly disassembled and packaged at Thick Bikes) to the Western Auto in Natchez. It’s about a mile walk from the greyhound station to the western auto but I’ve been unable so far to find any info about public transportation there. So I’ll be winging that part I guess.

I’ve got a loose itinerary planned, but it doesn’t seem like i have many options for free camping (all my money is going to greyhound and fedex so no paying for camps). The second day of my ride i’ll have to go 104 miles from Rocky Springs to Kosciusko. I’ve never done a century before but there doesn’t seem to be much of a way of avoiding it, so hopefully i’m cut out for it.

I’m wondering if anybody that’s done this ride could tell me about that water situation on the parkway? I should be able to carry all the food I need with me but I worry a lot about water. I’ll have a camelbak and three regular bottles, but I’ll also need water for cooking my dehydrated meals at the end of each day in addition to drinking water.

I guess that’s as far as I’ve gotten about stressing about this thing so far. Anybody got advice?

Same advice: Read some of the history.

For example, Meriweather Lewis (of “… and Clark” fame) died there in what was probably a murder, but is still a mystery.

greyhound allows bikes that are boxed up, but i need the bike to arrive three days before i do so that the Western Auto can re-assemble it for me. i don’t trust myself to re-assemble a bike

Have you considered shipbikes.com? They send you a box, you use their label to get their greatly reduced bulk rate, and they go to bat for you if you need an insurance claim (really the most valuable part of the service as they have more experience than most here). No need to disassemble most bikes, just remove a wheel and lower the seatpost.

@ricerocket woooah that’s awesome! thanks so much for the tip. looks like it’ll cost the same as having the bike disassembled, shipped, and reassembled. but that saves me a lot of stress worrying about the bike’s reassembly at a place i’m not familiar with. now i just need to find out if i can ship a bike to the hotel i’m staying at when i get there. thanks again!

@mick i’m looking forward to camping at the meriweather lewis campsite! a lot of the other history along the way looks pretty sad and spooky. i’ll definitely bring a history book along with me.