Question to the group at large:

Now that warm weather is upon us I like to ride the local Montour trails at night when “I” get home from work at 12:30am.  I know the trail “closes” at dusk which makes no sense but my question is what is the actual crime being committed by me riding the trail at night with proper lighting on my bike and helmet.  I need to exercise as I am type II and “my 5pm” is at 12:30am as I work second shift at my job.  I feel that I am just riding a bike on a trail, I am not causing damage to anyone or anything, I am not entering places I shouldnt be entering, what is the real crime?

Not only that but what if anything is the real penalty?  Can one be arrested by riding the Montour tail at night? DOes one get a ticket to appear and get fined?

I dunno about the Mountour trail, but I ride the NST at all hours, and have never had any issues. I’ve seen Millvale cops at the exit well after dark and they’ve never said anything to me. I suspect those signs are mostly there so the police have a reason to shoo away teens who are up to no good. I’d be surprised if you were ever given anything more than a warning. Of course, I don’t know what goes on in the South Hills and Mountour probably crosses 20 local jurisdictions.

Thanks for your reply, anyone else with experience with Montour Trail, I know my timing is off as it is Friday when most are stuck in traffic, I havent even taken lunch yet.  Welcome to my world on second shift. Not complaining, I prefer the shift it just doesnt lend itself to a “normal” lifestyle which is fine by me but I also dont like to be told I cant do something everyone else can do simply based on the time of day.

I rode it 9pm and 10pm. I don’t remember any sign that trail is closed during night.

It says it on their web site.

It doesn’t say it is closed. It just says that the rule is ride Dawn to dusk. A rule isn’t a law. As long as you are riding with lights you’ll be ok. What’s the worst that can happen? Someone calls the police and they manage to track you down, and you say you didn’t know and they tell you to remember for next time.

However the chance of that happening is slim to none.

I like that answer :-) I love riding at night, soo much better than daytime and peaceful. Not to mention my sugars can drop 20 units so quickly, I love it! A day of work followed by a bike ride when I get home I sleep so much better as a result.

I used to ride the Montour regularly, and sometimes was still riding when it got dark. I encountered one of the Montour’s volunteer trail patrol folks once, who just wanted to know if I needed any help. Nothing about asking people to leave the trail.

In spots the trail goes right past peoples’ back yards. I’d guess the rule was created to appease those homeowners who worried about ruffians and nogoodniks casing their property.

I imagine anyone causing trouble on the trail outside of posted hours could be charged with trespassing, but I doubt anyone’s looking to do that to someone causing no trouble.

I don’t know anything, but my SUSPICION is simply that the trails are unlighted, and “permitting” use at night may lend some element of liability in the event that someone gets hurt. Again, that’s just my assumption.

I think you’re 100% correct — it’s a combo of “we don’t have lights and we don’t want to have liability if you get hurt” plus “we told the neighbors that it won’t be open at night so they don’t have to worry about being robbed.”

Trails have all kinds of other rules that are never enforced — i’m pretty sure the trails around pittsburgh have a 15 mph speed limit. Heck, there are no cars allowed on the north shore trail but most bollards have been knocked down — by cars.

If you ride and don’t make trouble no one will care. If for some reason you’re caught just by courteous and say you didn’t know and all will be well.

If you can’t trust others to use lights, it’s more important to be hi-vis, yourself. 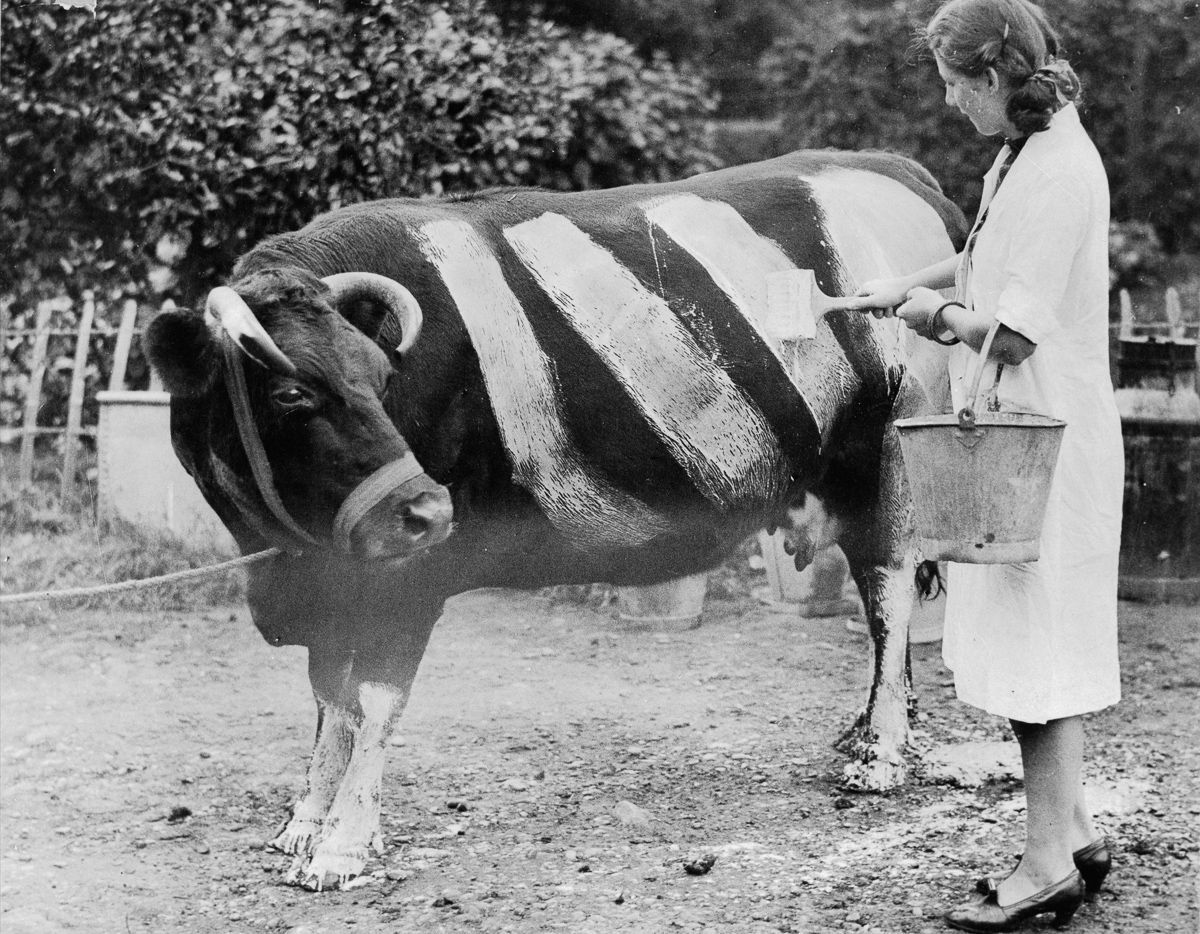 During World War 2, a farmer paints stripes on her cow to increase its visibility at night and prevent car accidents should it wander onto the road during blackout conditions.