“Resurrect Dead” the documentary about the origin of the Toynbee Tiles is playing at the Melwood Screening Room through Dec 12.

A tile on Smithfield Street: 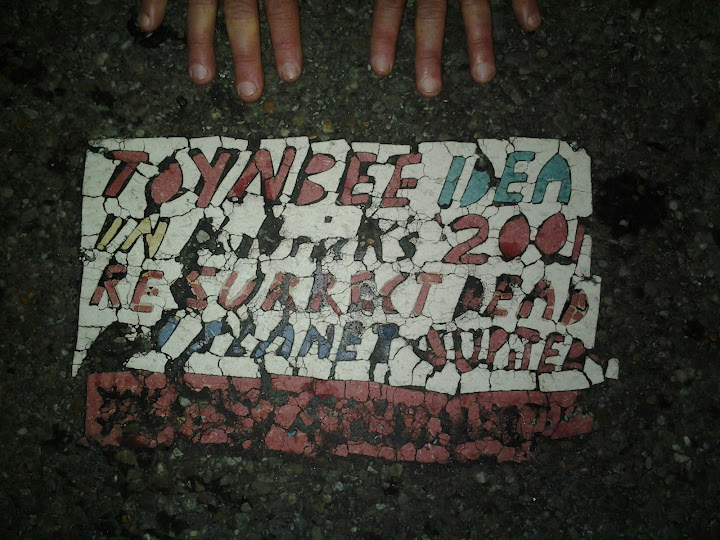 i saw this movie during the 3rivers film fest. it was excellent. go see this.

Another tile on Smithfield Street

^ do you remember the cross street of this tile? I found three others on Smithfield, and this was not one of them. It had a similar figure, but on the upper left corner.

There’s a list of locations here (linked from the Wikipedia article).

Looks like it’s one of the two at Smithfield and Oliver, per the Trib.

^ you guys are correct – my cruddy night time photography had me confused!

Here’s the one by the courthouse: 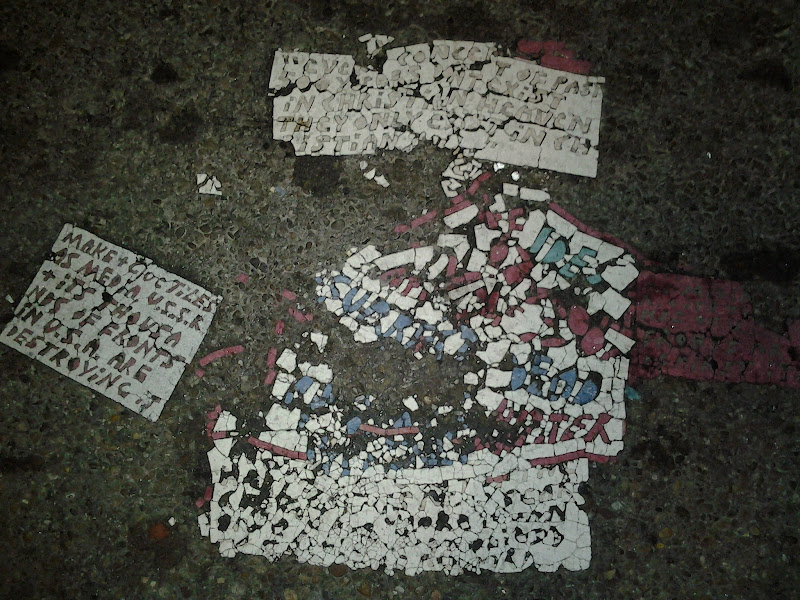 ^ Wow, that one is messed up looking! I haven’t seen it.

FYI, those interested in Toynbee tiles: the copycater ‘House of Hades’ has installed several new tiles in Pittsburgh. I’m guessing he/she/they laid them in the summer of 2012. They’re a remarkable homage to the original tiles, some use the LadyLegs and Spoon. They took great pains to make them look very much like the original tiles and include paranoid rants against the Media that many of the original Toynbee tiles did.

Keep your eye out for them! I’d suggest not posting the locations in case someone wants to use them in Tag-o-Rama.

OMG!! I think I spotted one of them a little while back.

I remember thinking “Hm, Could that a Toynbee I somehow missed? Nah.” and kept on rolling. Besides, it didn’t seem right, given the location. And the color scheme seemed a bit off.

Chances are I was seeing things; Pittsburgh streets can do that to you. Couldn’t find it on the Google; but the capture date from around there is Jun 2011. Lights playing off a utility access point? The top from a pizza box (do we even have any seriously hipster pizzerias)? So many possibilities…

Ahlir, clearly you’ve never been to Spak Brothers. While they themselves don’t give off a hipster vibe, their clientele certainly does. Probably a lot of people from Roboto adds to that.

Pierce: You’re totally right. On reflection, I was probably factoring in [~hint] the neighborhood of the (maybe) sighting.

Ahlir wrote:OMG!! I think I spotted one of them a little while back.

I remember thinking “Hm, Could that a Toynbee I somehow missed? Nah.” and kept on rolling. Besides, it didn’t seem right, given the location. And the color scheme seemed a bit off.

Well, enjoy… I’ve found 9 so far as well as a Stikman tile.

Awesome – I can’t wait to find them.

They’ll never replace the originals, and I’m hoping that the copycater actually did put them out there as homage. I’m sure I’ll like them better if that’s the case.

I hope that he’s not just a ripoff artist.

They’ll never replace the originals, and I’m hoping that the copycater actually did put them out there as homage. I’m sure I’ll like them better if that’s the case.

I hope that he’s not just a ripoff artist.

Nah, judging by the work HoH has done in NYC and Philly and Portland, there’s nothing HoH is promoting other than keeping the Toynbee mystery alive. I wouldn’t call this ripoff-ery. A few of the HoH tiles incorporate Hades graphics/art that is unique to the Hades artist, all painstakingly cut into linoleum tile, (which I imagine is a very difficult medium). Yet, the Hades tiler keeps many of the Original Toynbee tilers themes: paranoia, hatred of the Media and journalists, and of course ‘The Toynbee Idea’.

The original tiles told us to glue our own tiles, so I think copy-cat tiling was sanctioned by the Original Tiler.

I’m completely in awe of both the Tilers and I feel blessed to have the Hades tiler make a stop in Pittsburgh. The tiler also installed a large piece of their unique graphics/art on/adjacent to one of the tiles. The remaining 8 are simple text tiles or text with LadyLegs/Spoon adornments.

The Stikman tile I found though DOES promote a product, although you have to be curious enough to do research on the tiles to find out what he’s promoting.

Thank you and good-bye.

Yeah, RR, thanks for reminding me that the original tiler sanctioned the proliferation of tiles.

Now I’m super-fired-up to find them.

Oh, neato – fun to see this thread revived!
In my OP I forgot to mention that the reason my photos are so dark and greasy looking is because they were night time cell phone shots. After the film, my friends and I went downtown to look for tiles. When we got to the one near the Kaufmann’s used to be (sorry), we ran into another group of friends who were downtown already doing the same thing!

I look forward to seeing the duplicates. Hopefully the redux group will leave out the less savory parts of the paranoia. Looks like they cracked the code of how they are made!