-Meters will be removed, meaning we’ll be losing lots of parking.

-City intends to install lots and lots of bike racks in the affected neighborhoods.

-The racks probably won’t go in until after the meters are removed – hopefully as soon as possible.

-The new kiosks will be installed while the old meters are still there.

-Once you see a kiosk, the meters will be removed within a week or so.

–If possible, avoid longer term parking at the meters at that time.

-They assured us that they won’t remove the meters or cut the heads off, while a bike is still attached (this happened in Philly). They say that if they come upon a bike that is locked to a meter that needs to be removed, they will tag the bike asking for it to be moved within a certain time. they will then come back and remove the meter.

This is also a great time to get your favorite places to submit the online form to request a free rack from the city. This will help give them a better chance of getting a rack after the meters are removed

THANK YOU Bike-Pgh for being on top of this and facilitating a plan before the meters vanish.

You’re welcome! Thanks for being a member and supporting our work! This thread and blog post made me curious to see whenwe started working on this. Jan 24, 2011 was our first letter to the Parking Authority and its board of directors about meter modernization/bikes. This kicked off a series of meetings, emails and phone calls to address the issue.

Let’s wait until those racks go in.

If all goes well, this will be the largest installation of bike racks the city ever did. Even after, we’ll probably still be short, but i’m confident that this is a great start that will be built upon.

meters are disappearing over the past week or so. at least in shadyside and bloomfield, where i often find myself wanting to park my bike. not very happy about that, especially in shadyside, which already had a dearth of bike parking (where i park, anyway) but plenty of demand.

The meters were removed from Forbes in front of work downtown a couple of weeks ago. Bikeygirl and I nearly had our bikes set adrift from the removal! But our wonderful door man Tyrone went through the building looking for bike owners before they were cut loose, 14 floors. Reminds me I owe Tyrone a little something.

We now def needs some racks down here, in front of 429 Forbes, need to work on that.

I’m not sure why the shadyside parking garage has no bike racks inside… I tried to 311 it, but it’s the parking authority’s problem.

Meters are about to start disappearing from Butler street, too. Noticed one of the new multispace meters around 43rd the other day.

Meters gone from pretty much everywhere now. The Strip, Southside, Downtown… Still no new racks, aside from a few Ive seen in Oakland. Hopefully they get on installing more of these new racks ASAP. Having to lock up far from your destination is especially painful in these chilly fall/winter months.

not really sure what the hold up is, but the southside should be getting racks really soon

the racks in oakland are kinda lame, too. instead of a pole every ten feet, there’s a staple-rack down at the corner–and pretty much only on Forbes; there’s virtually nothing in eastern Oakland at all.

if not already in the works, I’d like to propose a corral (perhaps a small one) on Craig St. I’ve seen three or four bikes locked just to the wheelchair railing at the Starbucks, not to mention the small handful of other options remaining on the block. The sidewalks are narrow, too, so it might even be appreciated as an opening-up-the-pavements sort of thing…

There’s a beauty spot for a corral at the new Strip District diner Kelly O’s, there’s a big area in their lot that’s nonfunctional for cars. I spoke to Kelly and they’re cool with it.

Emailed Dowd and Peduto just now as a concerned Bloomfield business owner who will lose money from lack of places to park. (Really, I just want more parking for myself

I know Leslie at East End Book Exchange, so she and the businesses she knows can also do the same. IF you know a business owner in an area where meters have been removed, try to get them to email their councilperson. I’m hoping that if enough businesses express interest in having racks in the neighborhood, that the city can install them sooner.

I was in south side, in a meter-less lot.

I parked, paid my fee ($2) entered my license plate, have witness (girl friend). Came back after wandering around $20 ticket.

It’s dumb to have to do it, but print and keep the receipt.

i was wondering if bikepgh might have any printed material for businesses about getting themselves hooked up with a bike rack? i deliver posters all over the place and i have been thinking it’d be easy to hand out some info to business owners about bike racks.

i could just make some flyers or something myself, but i’m certain kinds of lazy. i WILL distribute info to/for peeps, though. downtown needs more bike racks bad. i feel like kind of a bad person for locking up to a little tree.

about a year ago, i made this cheesy flyer that you can print out.

gotta say that they might wait awhile because it seems that all available racks will be going to the parking meter replacement. it can’t hurt for them to submit, in fact it could help because it demonstrates that there is a demand for this, thus making it easier for the bike/ped coordinator to justify asking for more $$.

i shall print those. thanks!

The lack of meters has made it difficult to find places to end the Flock rides. Only two places now can accommodate the number of bikes that we bring. Yesterday we needed more bike parking than even OTB had available.

I’m looking into starting the process of having a bike corral at the big idea, but I can’t make any promises, since it’s a relatively long process.

I know most people wont want too

@buffalo^2 — there are racks down Craig a little ways, at the CMU Public Safety building (formerly the center for the blind, if that helps — the building that contains Razzy Fresh). Personally I think it would be great for the city to put a bike corral in on Craig as well. aaaaahahahah! BIKE STACKING IS THE ANSWER!

This one is better —

This is what is going a happen if you park we you should not: 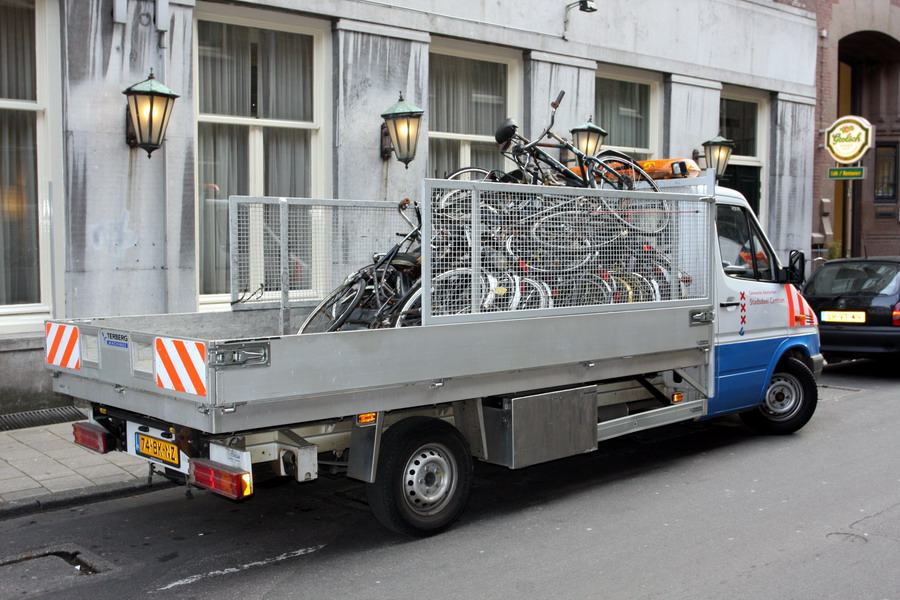 “They assured us that they won’t remove the meters or cut the heads off, while a bike is still attached (this happened in Philly). They say that if they come upon a bike that is locked to a meter that needs to be removed, they will tag the bike asking for it to be moved within a certain time. they will then come back and remove the meter.”

Hrm…. that is not true: From Downtown they removed the meter off in front the building were I work. The Gentleman in charge of security at front knew it was my bike and that of my co-workers and alerted us, so we went and got them.

Do not trust that they won’t remove a meter if you have your bike locked there.

@mikhail – where are those pics from?

Y’now when one of the “Great things Europeans have” included a 5 story bike garage I despaired. A big bike garage means in wonderful Amsterdam, you can’t just ride to the place you want to go and park your bike in front of it.

@jamesk – my office is around the corner, so i wouldn’t be using the potential racks myself, but it’s clear there’s demand (the CMUPD building racks are themselves quite often full)…

There’s some sense to that. I’d sooner see a bike corral on every block than one massive, central bike parking facility.

But I have to admit, that massive, central bike parking facility is a sure mind-bender for people who think there is no need for bicycle accommodations in a city.

Hrm…. that is not true: From Downtown they removed the meter off in front the building were I work. The Gentleman in charge of security at front knew it was my bike and that of my co-workers and alerted us, so we went and got them.

Do not trust that they won’t remove a meter if you have your bike locked there.

As it said, they assured us….We’ve heard several instances where they did however. When did it happen? Can you send me a description of when/where it happened?

“Y’now when one of the “Great things Europeans have” included a 5 story bike garage I despaired. A big bike garage means in wonderful Amsterdam, you can’t just ride to the place you want to go and park your bike in front of it.”

Not true. You can ride your bike up and park at just about any business. From my understanding the garages are near trains and major transit hubs.

That was what I observed in Amsterdam – certainly near Centraal Station there is a massive bike parking garage used by people taking the train/bus, but that is not the normal situation. Most bikes are locked to railings along the canals, to racks, in smaller parking plazas, etc. – they truly are everywhere. I understand there’s still not enough bike parking in some places but it’s certainly not like you’re going to have to park your bike somewhere and walk a mile to where you’re going.

I don’t remember when this happened, maybe month-and-a-half ago.

The event happened on Forbes Ave Downtown, and my Bldg Door/Person warned me-us that the City-Guys were taking down the meters BEFORE the guys actually would have gotten around to do it that day, so don’t know if they would have actually done that, although it was suggested they would have.

ahhh. thanks for clarifying.