I think they mean to say, cyclists should follow the signals for vehicles, not pedestrians. Which is what you do, and we all should, all the time. But not everyone does.

thank you Jon and Jon, and especially for teaching me the Barnes Dance.

@jonawebb writes, “cyclists should follow the signals for vehicles, not pedestrians.”

@me amends: unless otherwise directed, which one will find along the Penn Avenue–it IS a bit confusing; some signs direct cyclists to follow vehicular signals; other(s) to follow pedestrian signals

Multiple vehicles parked in the lane near the Convention Center, yesterday, at around 1PM. Would’ve taken pics, had I had my phone with me. U-Haul truck and some workers doing some type of cement work on the sidewalk, apparently.

Heads up guys, if you try to enforce the law, you’re the reason cars hate you, according to one guy in front of Heinz hall. I stopped to take a picture of an RV parked in the bike lane in front of Heinz hall. Then, a large man wearing a grey sweatshirt that said, “Pittsburgh Zombies” on the back came screaming at me that, “he had a permit to be there by the city” and that, “I’m wasting my time.”

I told him I’ll just go ahead and report it to 311 to have the city check it instead. He told me that he bikes to work every day, is a member of BikePGH. (which I HIGHLY doubt)

I should have called 911, but this guy was insane, so I grabbed a drink of water and waited for him to leave, as well as the RV to get out of the lane.

This begs the question though, the city wouldn’t be stupid enough to allow Heinz Hall to have a permit to park there would they?

Also, aside, there are ASL boxes being installed at Penn and 7th.

BTW, 311 is not a sort of mini-911. If you see somebody violating the law and you want the police to issue a ticket, call 911. 311 is for things like potholes you want filled, or bike lanes cleared of debris, etc. It is the way to access city maintenance. There’s no point in calling 311 for illegal parking; it’s only going to delay things, if it makes its way through the system at all.

I was just informed of that today, which I subsequently called 911 about. I guess I was just a bit averse to using 911 for something like illegal parking, but I will for sure do that now. Thanks for the heads up @jonawebb

P.S. Picture of the vehicle in question.

I’m actually okay with Heinz Hall blocking the bike lane to load or unload…so long as they set up sawhorses (not just cones) to block the leftmost inbound lane of Penn and route the bike lane around the truck/bus/RV.

If that’s too much trouble, then they should probably just park elsewhere.

Counters on the Penn Ave #bikelane are now off-line for the winter. Stay tuned for Sep. & Oct. traffic reports on our blog next week

Bummer. I was curious to see how much use it was getting during the winter. But I guess those counting strips wouldn’t survive if a snow plow passes scraping the road. Or maybe the Pittsburgh Downtown Partnership doesn’t want to show the data?

Will the cameras still be running? Can we get some sort of automated counter to analyze camera footage?

The City has installed at least 4 new bike racks along Penn Ave: 2 between 6th and 7th near Meat and Potatoes and the O’Reilly Theater, and the other two near Seviche/Sharp Edge/Sienna. As before, they were commissioned by the Cultural Trust (I think) so they don’t look like your typical bike rack. In fact, I’m not sure the one in front of the O’Reilly is a bike rack. I bet you’ll have a hard time putting a U-lock through it

Partly prompted by Stu’s question, I asked Envision Downtown if they would continue to collect data by some other means (after business hours, probably, on Friday; at any rate, no answer yet). Will update when/if they respond.

@envisiondwntwn Are there alternate means available that'll be used for tracking usage during the winter?

Some pictures of the new Penn Ave bike racks are up on the BikePGH Flickr:

Of the six shown, five are new. The one in front of the O’Reilly Theater vexes me.

I hate these art racks, they dont’ scream “I’m a bike rack, lock to me”, and some of them are really terrible at the job of being a bike rack.

What I want to see is pictures of these racks at capacity with bikes locked Properly with frame ulocked and at least a single wheel cable locked with an accessory cable.

I think it would be nice to have a plaque on the ground that indicates the name of the artist, the name of the sculpture/rack (if there is one), and a little blurb that says “Cultural District Bike Racks”. That would make their purpose more apparent.

For example, I recently found out that an artist named Toby Fraley was responsible for one of the racks installed last year. It’s called “Contrails”:

But yeah, a couple of these are seriously lacking in functionality.

I need to update these with the new installations and I will do that. VB

And another, on 6th Street, heading north towards past Penn Ave:

Also, I hadn’t noticed before the plaques for all the racks in the Cultural District. I think these plaques are new:

Cool. Having signs that indicate them as bike racks, and identify the artist is a nice improvement. It makes them less ambiguous. Still not as enthusiastic about them, but I’ll take it down from hate to dislike.

And then, there’s this:

I was in Montreal for a few days and snapped some bike infrastructure pics.

Parking meters, as in Pittsburgh, were replaced by kiosks. But the meter posts were left. They already had a ring for locking bikes; so everywhere downtown there’s bike parking. (The meter itself was replaced with info about parking hours and such; so you don’t have to schlep to the kiosk to figure out what’s up. Meter posts are next to buildings to make snow removal easier.)
[*CENSORED*] http://lh3.googleusercontent.com/-0JqjCN8aMag/Vm9ivS24qLI/AAAAAAAAMqg/rXN-Yvu7oR4/s640-Ic42/20151212_124703.jpg

Some streets have bike lanes separated from cars by a raised median. Safer than bollards.
[*CENSORED*] http://lh3.googleusercontent.com/-BGR-W8vYrmk/Vm9i6FehqfI/AAAAAAAAMqo/zTwPW9Pko2I/s640-Ic42/20151212_124739.jpg

It includes discussion of bike lanes such as Penn Ave.
At 4:40, Paul Guggenheimer says that Penn Ave cyclists are harder on pedestrians than motorists are; “they get very upset when you walk into their lane”. [maybe he didn’t try getting hit by a car vs. a bike]
At 5:10, a caller from Healthy Ride points out that 20 bikes can park in the same space as 2 cars.
At 8:15, a caller from Wexford says that most of her suburbanite friends “loathe Pittsburgh especially now that you have the bike lanes”. [It sounds like she dislikes change – Penn Ave is one-way for cars now, OMG!]

The Wexford caller also complained about loss of parking around Phipps. I recall that some parking spots were removed, but there’s still parking along Schenley Dr leading up to three-way intersection. I guess she wants all the parking!

The last caller apparently has never heard of Google Maps…

People from Wexford loathing downtown EVEN MORE because of bike lanes = win/win for bike lanes.

The bike-counting devices have been reinstalled, I noticed one this morning around 9th St.

Alright people! Once again, it’s time for the ten of us that use this cycle track to dust off our bikes and make a minimum of 10 passes per day over each counter. We need to keep those daily counts high! ;-)

Seriously though, judging by the number of bikes I see locked up on the newer art racks between Garrison Pl. and 10th St in the evenings, I’d say the bike lane is getting plenty of use.

ICYMI: A six month analysis on usage of the Penn Ave cycle track:

Penn Ave, including the bike lanes, is closed between Seventh & Ninth for the Children’s Festival. Festival opens Thursday and runs through Sunday: http://pghkids.trustarts.org

Jagoff parked in the lane at 16th and Penn this morning, reported to 311. 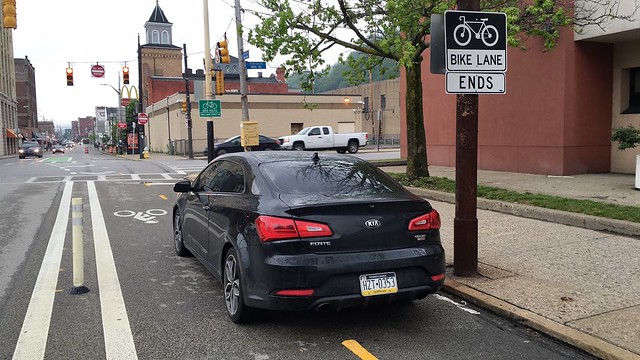 I think a 911 call would have been more appropriate.

My understanding is that merits a 911 call.

yep, especially since they would’ve had to drive against the one-way to get there…

I called 911 about the Kia- HZT 0353 this morning FWIW. He said he would have someone come check it out.

when i rode past this morning, it was getting towed