Maybe i’m twisted, but it would be fun to stick around and mock the driver when they came back for their car. Perhaps film their reaction to the missing car for everyone on facetube to enjoy. Such an excellent opportunity for schadenfreude.

when i went past, i just assumed there was a crash, and it was being towed. didn’t realize that the car was parked there…

That’s pretty quick then. Probably shortly after I called. Wow.

Tow companies don’t waste time. If they’re notified by the police, they’re johnny on the spot. Once they’re connected to your vehicle, it belongs to them.

The profit motive in action. See, capitalism isn’t all bad.

The plastic bollard in the middle of the lane was knocked down while they were towing. i was pleasantly surprised to see that someone had fixed it up by the time i was heading back east

The Penn Ave bike lane was discussed on the streetsblog podcast!

“On the podcast this week is Robert Ping, executive director of the Walkable and Livable Communities Institute, who tells us about Pittsburgh’s plans for the largest shared space in an American city.

Robert also discusses why it’s so important to get public officials from different agencies in the same room together to talk about improving conditions for walking and biking. And we wonder why parents are being threatened with arrest just for walking their kids to school, and how getting driven around affects kids’ perceptions of where they live compared to walking.”

In case you need water near the Penn Ave cycle track:

“State Law Yield to Pedestrians” signs on Penn Avenue where bike lane is are somewhat protruding into the bike lane, moved a few of them out of the lane last night but I was unable to get all of them.

New counting strip at 14th St, on the downtown side of the intersection. The ones at 12th are still there.

New crosswalk paint at corner of Penn Ave & 11th St. The green is faint and will just get fainter with time. But the white should help protect pedestrians a bit. 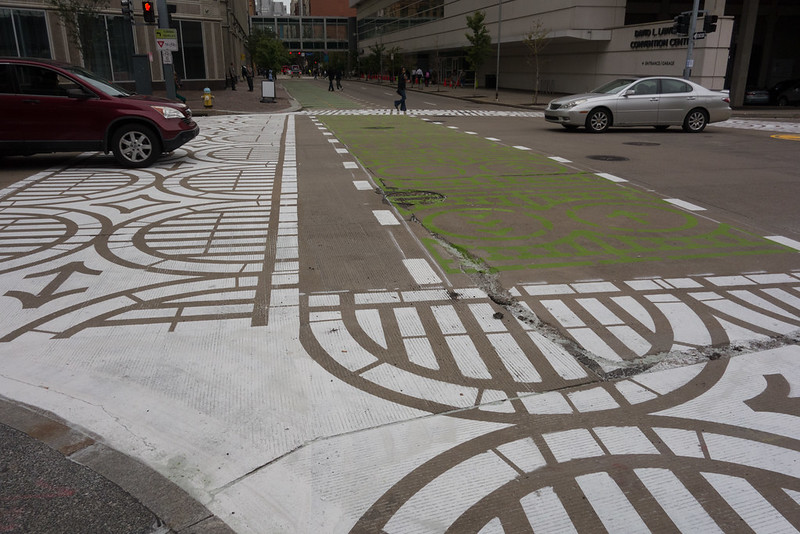 They painted this on Sunday.  Hopefully they are doing other intersections on Penn too.

Those painted crosswalks are part of a study and intended to be temporary. The paint is water soluble and will fade quickly. Sorry, can’t remember where to find more info on this.

I think it would have been prudent to patch the many cracks and potholes prior to this “fancy” painting since it essentially camouflages them (see above pic) and ironically creates its own safety hazard.

they do intend to redo it with a more durable thermoplastic, however for the sake of getting it in, they went with paint.

but that will fade really fast, especially since it’s on concrete

they do intend to redo it with a more durable thermoplastic, however for the sake of getting it in, they went with paint.

Will they add sand to thermoplastic? Otherwise it’s going to be “a skating ring” during rain/snow.

Google cached an earlier version of their page describing the project:
http://webcache.googleusercontent.com/search?q=cache:9bKgQcrPk38J:www.envisiondowntown.com/penn-11th-street-graphic-crosswalks/+&cd=3&hl=en&ct=clnk&gl=us

I’d be interested in hearing from frequent users whether or not you’ve noticed the inbound improvements on Penn help cyclist priority at the crossing.  The intent was to utilize portions of protected intersection design (offset crossing and forward stop bar) to induce better driver behavior making left turns across the cycle track.  Thankfully the street has been calmed enough to bring speeds down in general, but I’m rather frequently – at least for my comfort – close to getting left-hooked by drivers either not seeing or not caring to pay attention to the left turns yield signage.

No, I’m not seeing motorist behavior changing with the signage or the new paint and I gave the Envision Downtown folks feedback as requested:

A: notably, the new green paint has camouflaged a few pre-existing potholes. Previously visible holes and cracks are now a greater danger to cyclists. Attention should have been paid to patching the holes before putting paint down.

B: turning motorists almost always fail to yield to traffic proceeding straight in the bi-directional cycletrack. The concept of traffic passing on one’s LEFT at an intersection while trying to turn left is a foreign concept and motorists do not expect to see traffic there, not do they feel that traffic proceeding straight has the right of way. People should not have to compete with impatient motorists who menace others with horn-honking and yelling to ‘get out of the way’.

How can these conflicts be avoided?
Separate signals for motorists, pedestrians and bike traffic.

If the city chooses to allow these conflicts with one signal for all three road users, then please begin ticketing those who refuse to yield, intimidate pedestrians or block the crosswalks.

Agreed.  I always feel I need to start 3-5 seconds ahead of the left turning cars and be in the middle of the intersection so they see me. Agree with rustyred- they just don’t even think to look.

This is a design problem and more signs won’t help. They need to design their way out of it. It isn’t as bad going outbound but problem still exists.

It is far worse from 11th downward than the strip section I’ve noticed.

I’ve been using the lanes every weekday, twice a day since they were installed.

Outbound, I feel like inbound drivers are more used to seeing me coming now than when the lanes were first installed and maybe the drivers thought “great, cars can no longer come outbound so I can turn whenever I want”

Inbound when stopped at a light, the staggered stopping lines are a big help and I feel less likely to be left hooked when the light turns green and both a driver and I move into the intersection, since I have a head start. Separate signals with the bike signal starting first would be ideal, but this was a non-starter when I asked for it back when these lanes were in the planning phase. Maybe the city would reconsider now?

But when traveling inbound toward a light that’s already green, I feel just as likely to be left hooked as ever. About half of drivers simply don’t look. If someone is turning, I have to assume that they aren’t paying attention. Just today a lady in a white SUV turned left across the bike lane, right into me, forcing me to stop so fast that I dropped my chain and almost skidded out. I screamed out! She which she stopped, looked at me with a blank face, and then drove off.

The signs aren’t cutting it– we need some enforcement down here. A cop watching this corner could get guaranteed tickets any morning of the week.

With the pgh police chief resigning it’ll be interesting to see how this changes things with bikers. My sense was that the former chief was fairly progressive and there was a ton of push back from the “good old boys” in the police force who didn’t want to change.

In either case, I bet policing the bike lane and writing tickets for cutting off bikers is super low priority.

Yes. I posted this in the fall conditions thread. It is scary with no bollards or markings. Cars will think Penn changed to 2 lanes there.

Discussed this with the city.  they are supposed to be putting temporary cones out, which i think will help. the problem is that it was a utility that dug up and repaved, and are now responsible for replacement of everything, and there’s hold ups when dealing with contractors. Ugh.

can confirm—cones were placed sometime between 7 and 10 last night.  there’s also now a solid line there between the bike & general lanes.

Would you stop for a stopped school bus with its lights flashing while in the Penn Ave cycletrack? I did, but many others did not, either direction.

I creep up alongside the bus, making eye contact with the driver. He gave me the nod, clicked off the lights, the flashing stop sign folded back, so I proceeded. I mention this on the video, though the camera does not pick up the visual.

I’ve never thought about that.

I stop on a regular street, no matter what side of the street the bus is on.

However, is the cycle track part of Penn considered more like a divided highway? If there’s a barrier in the middle you don’t need to stop if you’re in a car and the bus is on the other side of the divided road.

stand by for the second act in the Kabiki Theater: can they use the 700k elsewhere?

I think half of it goes to Darlene’s smoke eating machine for her office and the other half goes to a private access highway directly from her house to said building.

Not sure where this belongs but there is some relevance.

I think on the traffic lights at 11th, 10th, 9th, 7th, and 6th Streets, they should have a dedicated signal for bikes that turns green five seconds before the main vehicular light turns green. Also, keep the light for bikes green as well as a left and right arrow so turns can be executed safely for seven seconds after the main light turns red to prevent the right hook/left cross problem. If anyone driving doesn’t want to deal with the delay, take Liberty Ave. instead.

You might see those in your lifetime, but I doubt I’ll see them in mine. We need 10x the bike density, maybe more like 50x, before an idea like that is viable. Sorry to say, of the 8x a week I cross the Penn at 9th corner, I see a bike visible approaching either direction barely a quarter of the time.
The question, as ever, is why not? What’s keeping us from increasing our bike population 50-fold? This has comparatively little to do with ignorant politicians, though that’s a factor. There is no single, simple answer. 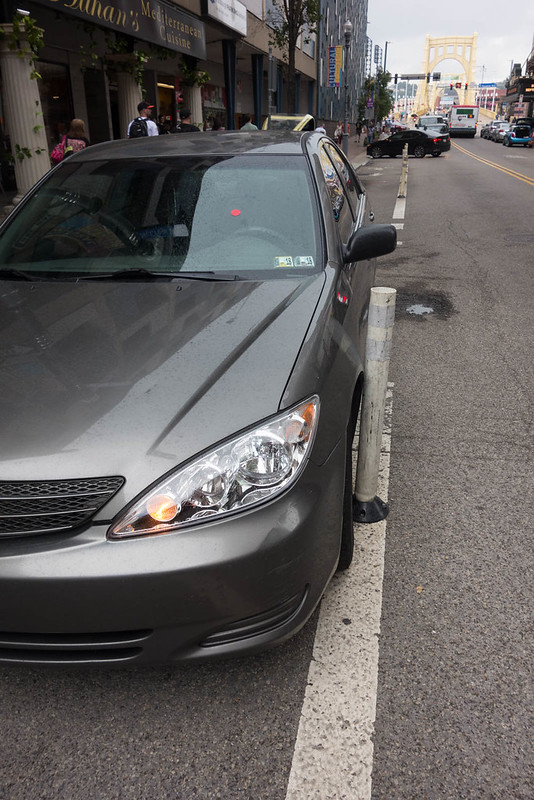 somebody placed an attractive sticker on the windshield. I’ve heard these stickers are available for 26 cents each: https://www.zazzle.com/i_parked_in_a_bike_lane_sticker-217228786292563921 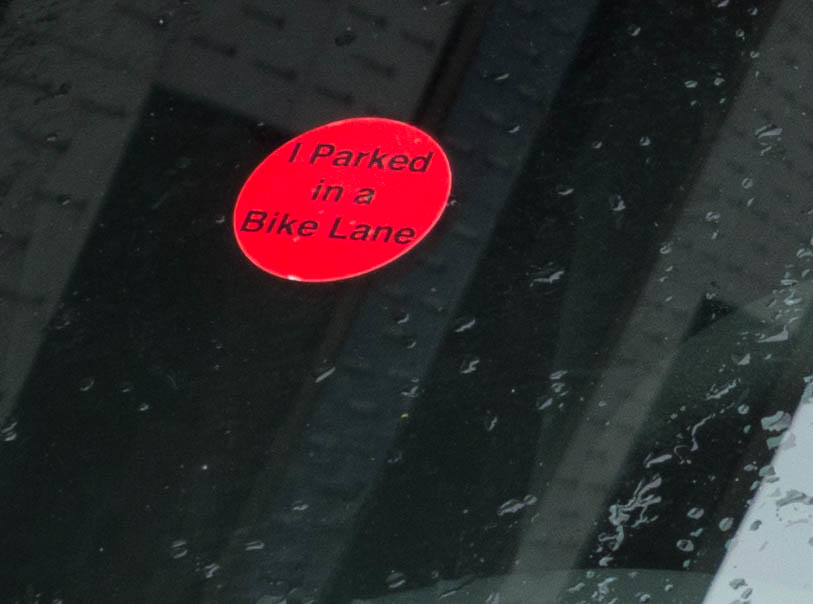 I’m not sure it’s worth $0.26 to play vigilante or advertise said activities:

From https://www.expertlaw.com/forums/showthread.php?t=174944
Re: Is it Legal to Put Stickers on Illegally Parked Cars
yes you would be breaking several laws and committing a tort or two on top of that.
and you might get the crap beat out of you to boot.

And from https://answers.yahoo.com/question/index?qid=20110401071621AATTHLY:
Yes, that would be illegal. If there is damage, it would be vandalism. Without damage, it could be considered disorderly conduct and/or criminal mischief.

You can’t put a price on fun.

That 6th St bike lane has more car parking violators than anywhere else.