I’m not familiar with the roads of the South Hills in the least really, and question my ability to safely navigate on that side of things without finding myself on roads I’d rather not ride on.

Yeah, that was my reservation w/ adding Capital. Unless there’s an argument for keeping it I’ll remove it, or make it an optional section w/ time bonus.

@reddan: one of the stops will be a water/PB&J stop, but maybe we can add some PBR

will the course be finalized by saturday morning so i can preride it?

Yeah. The plan tonight is to break out Bikely and finalize stuff.

I was leaning towards leaving Capital off because I’m not familiar with riding in South Hills and feel bad making a course that sends people somewhere I don’t normally go. That said it only adds 7km and Capital is a pretty amazing stretch of cobbles.

Another term for “extra 7km on unfamiliar streets” is “adventure”. What could possibly go wrong? I say leave Capital in.

The route to Capital is really pretty simple, and the climb over Mt Washington should really be included in any “hard” race in Pittsburgh.

I was out for this race, brother home from Iraq this week, but I think I might be back in now, so more hilss and more cobbles for me please.

I would not survive this. It’s a good thing I’m out of town so I’m not tempted to try. Maybe when I get back I’ll ride it in stages. Over the course of a week.

This course looks AMAZING. Props for putting this together!I say keep capitol, it’s not far out of the way and sounds like it’ll be a treat. Looking forward to it.

I would recommend avoiding Pioneer. I used to commute up West Liberty, I tried Pioneer a few times, had more run ins with cars in a day than a month on West Liberty. Narrow, blind corners, parked cars, etc. West Liberty is faster and safer.

Pioneer kinda vaguely works from Capitol if you’re heading back to the city. It’s all down hill and there’s only one cross street. I agree Pioneer is horrible in all other regards.

I find it very funny that people are worked up about Capitol despite the fact that it is well within city limits. I don’t know *the entire rest of the course* and I plan on doing it.

Since I suggest Captitol may I make another suggestion? Go up S 18th, come down Bausman. Right on 51 to W. Liberty (it’s 300m tops on 51/Saw Mill run). Left up W Liberty left on Capitol, left on Pioneer, back down to W Liberty then up and over Boggs.

It’s shorter, involves less fooling around on Mt Washington than the proposed route.

It’s a suggestion, not a criticism. See you this weekend.

I second the 18th to Bausman. That was my “snow” route when I worked over there, Sycamore and Williams were rarely plowed in the morning. 18th always was. Easy to navigate too if you know where to turn in Mt Oliver.

Anyone wanna help form a “Back of the Pack with Booze and Bravado” brigade?

i just finally got panniers, so i’d be happy to bring a sixer and some ice. what’s another 20 pounds?

@Mayhew: That route certianly makes more sense, especially since flipping the order to Climax-> Capital-> Wyoming (it was Climax -> Wyoming -> Capital which forced you to head up to Mt. Washington first). I’ll update the maps.

Anyway, it sounds pretty firmly like Capital is in. @Brad: if you want poetic justice you can work Capital as a check point and get pictures of people’s grimacing faces. Or I suppose you could just win the fixed category, that’s pretty poetic too.

Looking over this new course it makes me think that the fixed gear category winner should get free knee replacement surgery.

@Mayhew: I should note that the original Roubaix rules allowed you to traverse the cobbles in either direction, so the example course goes up Pioneer and back down Capital. Though come to think of it I think I’d rather go up Capital than down.

i just finally got panniers, so i’d be happy to bring a sixer and some ice

Sweet. I was just planning on putting a block of ice, some fruit, and some booze in a cooler on the rear rack. Figure with all the cobbly-bits, it’ll be a gallon of daiquiri by the halfway point.

Thanks man. No sweat on the rules. Going down cobbles is not much fun. 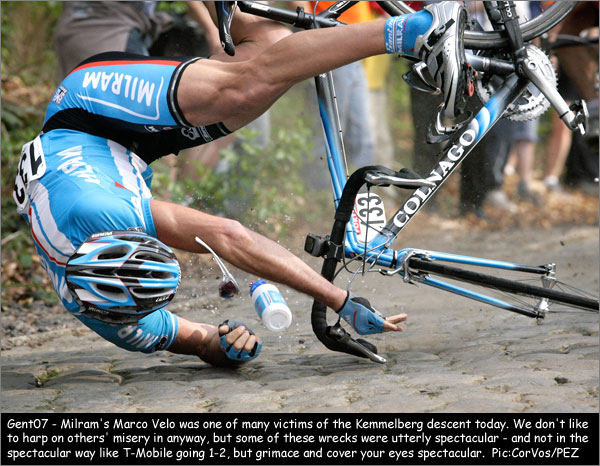 (or however you add an image)

I just noticed this is 47 miles on the route you’ve got on Bikely.

Maybe I should bring some food? And a blanket for nap time.

There will be a PB&J stop in the middle & bread, cupcakes & fruit at the end. You’re on your own for blankets though.

Aiiii! That picture just raised my blood pressure by an inch!

That’s a 23% downhill. It was very dusty that day too. It’s by far one of the scariest things I have been down.

hahahahahaha…. i have been out of town for the last four days and wasn’t even thinking about this… i’m so excited… i have to build my bikes now!

I would tag along with a rexaled paced group. There is no way I really want to try to navigate this crazy course solo.

FYI: I summarize the most up to date info on another thread: http://bike-pgh.org/bbpress/topic/the-pittsburgh-roubaix-2009-2014

I’m still sitting on the fence, but have talked with DMG about riding together for as much as we can stand… It’s just going to hurt so bad.

part of me wants to ride this fixed and take 4 hours just because i know there are only going to be like 2 other fixed riders… i just have to get in before the awards ceremony, which may be challenging.

Having ridden the North Side portion of this, now, I will be pretty pleased if I finish inside of 3 hours.