Tag #1: Coping Strategies – The train station next to (and therefore also the area surrounding) this shopping center is under construction, which, combined with the usual (summer) large number of bikes, means there is absolutely no space left on the bike racks, so there’s usually a (surprisingly orderly) line of bikes locked to this fence.

Yesterday I wanted to get a picture of one of the annoying and prevalent toaster-plus-metal-thing-connected-with-chain bike racks which I don’t entirely understand and which make it impossible to actually attach my bike securely without taking up three spaces, but my phone camera doesn’t work in the dark. :(

Tag #2: Door to Nowhere – This was supposed to be my Door to Nowhere, since it’s always locked and leads to a very overgrown set of stairs that go to nowhere (there used to be train tracks down there, I think), but today is was OPENED! So now it’s a door to somewhere tempting where I shouldn’t go.

(BTW, I’m really enjoying all the Pittsburgh doors to nowhere, and am bummed that I won’t be able to check them out in person anytime soon!)

I’m bummed that I’m not going to have a picture in it for Tag #2, since I ended up working from home today, but I will at least mention it, in case anyone else is still downtown.

Lemon Way, off of Cherry Way between Forbes and Fourth Aves, is arguably the shortest street in the Golden Triangle. It is the width of any narrow alley in the city (think Spring Way), but only about four dumpsters long.

Here it is on StreetView, unfortunately without my bike. I understand if this isn’t acceptable as a tag entry.

I thought each tag was supposed to have two weeks? This round started on the 8th… there should technically be two more days, no? Or do we mix it up sometimes?

When the expiration was originally set, it was only a week, and very few photos were up by then, so I extended it a week. Since we’re on a roll now, I’m OK with extending it two more days.

Im sorry when i played back a year ago during bikefest, alot of riding was going on so many pictures were taken. Thats why i shortened the time.

Anyway, here is a proper photo of the shortest street downtown. I was standing in the middle of Cherry Way when I took it. Yes, that is City-County Building in the background. My bike is up against the dumpster at the end of the street @Stu, Coffee Way is another of those short streets – plus it is made of wooden blocks (which some asshole paved over back in the early 90’s).

a bit past the deadline, but….

#2, door to nowhere. not sure if this was once the entrance to the apartment building above, to the ground-floor storefront, or even to the basement (go up to go down?), but now it seems to be an emergency exit only.

I think it’s time to tie up this round. BikeFest is done, the kids are going back to school, and it’s the start of a new week. You can look over the results over your Wheaties on Monday morning and think about what to do next.

…and Tag #2: entrance to nowhere, from steeld55, who supplied a picture of a Bloomfield doorway but that doesn’t count since it’s his tag:
5. RustyRed
6. srpit
7. jeg
8. StuInMcCandless
9. buffalo buffalo

Spinning the wheel, I get 5 and 6, so srpit and RustyRed get to choose the next tags.

How about an UNUSUAL planter, or unusual use of plants. Not just a pretty display – I’d like to see something creative and different. I’ve seen three things that fit this in the past week and was looking for some more for a blog, so I’m shamelessly using the game to help me find them! Is that fair?

I’m going to use the unused part of the “Animal, Vegetable or Mineral?” question. Looks like we’ve had plenty of animal and vegetation themed tags, but no minerals.
Tag #2: Minerals

How does a Sept 10th deadline sound? I picked up this two-some on the way home, then when I got home, my wife reminded me of the project she just completed on the side of the house. So I will post these now, and the other in the morning when there’s some light.

Tag #1, unusual planter: How about seven feet up on the concrete structure of the 40th Street bridge, for a place to have a tree start? Tag #2, minerals. How about a stone dog and stone books atop the dog? This would be just outside the brand-new-just-opened Millvale Community Library. Thank you, @srpit, for the info! I’d been looking at that statue every time I rode past for the past year and a half, but didn’t notice the paint job until I photographed it last night.

OK, on to the business of the morning. As mentioned above, my wife pointed out to me that her major project of the past couple of weeks satisfies both tags of this round. We had been getting lots of basement seepage after even moderate rains recently, so she dug an 18″ trench in the yard, the length of the house, and installed a drainage pipe. This was backfilled with gravel (Minerals, Tag #2), but decorated with the flowers she just bought, that she hopes will spread over the gravel (Tag #1). Dang, Stu… do you know how much money she just saved? We had a major issue a few years ago with an underground spring that decided to re-route itself through our yard. We needed French drains in both the yard AND the basement. Pricey.

Oh, I know I married well. She rebuilt the foundation wall, put in a 72-foot brick sidewalk, double-beamed the first floor, and rewired the house. 20 years later, we haven’t burned the place down yet, so I think we’re OK. I hold the flashlight and pay the bills. My big fat finger an included bonus! Also, if you do want continued help looking for planter oddities, shoot me an inbox or start another thread… I’m now on the hunt.

tag 2 salt is a mineral! Tag #1
KAYA- these planters are only unusual in that they serve two purposes: A: to be attractive
B: create a barrier between the diners and traffic. @Drewbacca, tried to PM you, but when the page opens to send the message it’s addressed to “headloss”??? Figured something was messed up. Does that sound right to you?

The board allows you to change your username, but the message system doesn’t acknowledge it–PMs still use the original name.

Here’s some nude rock people. I didn’t let the nekkid dude sit on my bike, though it looks like he’s itching to have a seat. buffalo buffalo wrote:The board allows you to change your username, but the message system doesn’t acknowledge it–PMs still use the original name.

I originally registered under the name headloss… changed it b/c I got sick of meeting people on here and introducing my self as “headloss.” I was inspired when Erica dropped the RubberFactory moniker. (Unnamed cemetery, Mount Troy Road–I’ve seen these in a couple different places. Have to admit, I don’t get it…)

Tag #2: Minerals – This construction site next to one of the public swimming pools has going on for at least a year. Not much is being built, but there are always new piles of things, including various minerals.

(Hm, Google/PicasaWeb seems to have changed some things around, and I’m not finding the URL for the larger image. Boo!)

Unfortunately didn’t find any interesting planters on the bike these past two weeks.

Bummed I missed this round. Work has sucked lately.

RANDOM spat out 2 and 10 at me: Stu and buffalo buffalo pick the next tags!

I’ll go first. The kids are back in school, so let’s try for a tag having something to do with schools or education, including but not limited to crossing guards, school buses, and not limited to K-12 education, either. Be creative! Tag #1: Education.

I work in the same building as Riverquest , but since I can’t readily haul my bike up to the second floor and tag their offices, I went down to the Explorer’s dock and took this shot. The boat was out on the rivers this afternoon. Oddly enough, the last time I got to pick the tag was just about this time last year…

Standard two weeks gives us a deadline of the 25th.

I rarely pay someone to make my coffee for me, they tend to make it too strong for my wimpy tastes… so here’s Dunkin Donuts and Nicholas Coffee in Market Square… places I might buy beans and take them home to make my own weak brew. StuInMcCandless wrote:Um, pardon my ignorance, but isn’t there a multi-story parking garage about 500 feet away? I find it hard to believe that it’s filling anywhere near capacity on a commuter weekday.

It seems employees aren’t permitted to intermingle their cars with patrons. The Casino purchased a building next to the parking garage, tore it down to create a parking lot for employees (they WERE leasing spaces from the Cardello building before).

I finally fired off a letter to both the Casino and cc’ed the Friends of the Riverfront after seeing a car parked on and blocking a third of the trail last evening.

“Kindly refrain from allowing casino employees to drive on and park on the Three Rivers Heritage Trail. The trail surface cannot sustain the abuse of heavy vehicles on a regular basis, it is already damaged from the cars with cracks appearing. Cars parked on the trail pose a serious threat to the safety of cyclists and pedestrians when they block portions of the trail and kick up rocks onto the trail. Please see the following links for photos of just one occurrence.”

Tag #1: Education – The public library is always a great place for education, as well as entertainment. Here’s the closest one to my apartment. I must admit, Pittsburgh’s library system is better than the one here in Berlin.

Tag #2: Coffee – I don’t usually drink coffee because of stomach problems, and don’t usually go to cafes unless it’s especially cold or for some reason I need to meet someone in a public place. But, I love to drink tea at home, both run-of-the-mill grocery store tea, and fancier loose tea in exotic flavors. This quirky little gift shop, called Teeater, has a good selection of the latter.

(P.S. Found the links to the full-size pictures again without much effort. Screw you, Google!)

Day off today, so I did some errands in Crafton and picked up these tags along the way.

Education: St Philips School. Also the location of my favorite fish fry in the spring.

Coffee: Dunkin in Crafton. Our coffee choices around the borough were limited to gas station coffee for a long time. Dunkin was a very exciting addition. 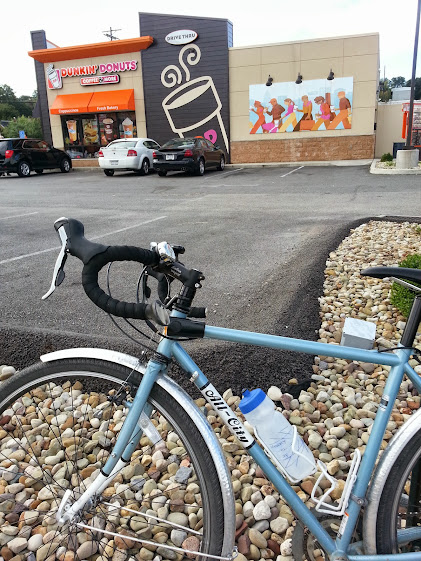 Tag #2: Coffee
Darn it, I can’t iPhone today. Or there’s a website problem. I cannot figure out how to get this Perry Perk photo to upload. This worked fine last week when I got the Tag-o-Rama photo.

This pic. The “Upload image” button wasn’t there