Presidents on Bikes: Just for fun.

So, I passed through the Atlanta airport this morning and saw a Jimmy Carter photo with him & Rosalynn on bikes!

Not this photo, but a different one. And, you can spot “W” and Obama on these pages: http://bicycling.about.com/od/thebikelife/ig/Stars-on-bikes/.

Is it me, or does that saddle seem a little low for him?

Heh. His leg extension looks OK but the running shoes and tapered jeans do not.

The episode of the Daily Show where Jon Stewart gives Carter a new bike is great.

The Obamas rode bikes around Martha’s Vineyard this summer. They wore helmets while the Secret Service, it appears, did not (see photo #5).

When I was in Washington in July, I was highly amused to notice that the Secret Service officers rode off-the-shelf Trek bikes without much customization. Sure, they were nice bikes, but not tricked out in the way that Pittsburgh’s bicycle officers’ are. Pittsburgh police FTW.

also, look at this crazy rig

Anyone else notice the partisan breakdown when it comes to doing the pedaling (hee hee).

Here’s a nice one of Jackie O putting the pedal to the gravel….

Here’s George Bush senior and his wife in Bejing.

OK, so it’s not really Lincoln on a tandem.

In alnilam’s photo it appears that Obama is pulling a trail-a-bike.

He probably had a Secret Service agent back there. Coasting, the lazy slacker.

Is it wrong to feel embarrassed that W. uses the same helmet that I do?

@Kordite: Just keep yours on your head where it’s supposed to be.

I passed through Atlanta again recently and got a photo of the photo that I mentioned at the beginning of this thread. Sarah Palin on a bike in Wasilla AK. A acquaintance of mine is a secret service

agent and was put on W duty just cause he

could ride a bike. W would apparently ride

really hard for 90 mins a day around his

ranch. Like to the point where they had to

find agents who could keep up.

Also they all wear “peloton one” socks

there’s an old pic of Clinton riding a Merlin after a tour of the Merlin factory ca. 1992.

I’ve also heard dubya was pretty athletic and hard to keep with.

here’s a good one

can we put pictures of future presidents on bikes?

You heard it here first! He’s shredding it with some vets this week.

^Did you watch the downhill video in the middle of the page? Wow! Um….

No, they just posted that overnight I suppose. It sounds windy.

“No, they just posted that overnight I suppose. It sounds windy.”

I wouldn’t expect anything less from a politician.

Nancy Reagan with her son Ron on a tandem:

^Did you watch the downhill video in the middle of the page? Wow! Um….

i kept waiting for it to get exciting…

as long as we get a V. Pres. Gary Johnson!

A camelbak on a road bike? Glasses under straps? White socks?

From Wikipedia: “… known for his … regular participation in triathlons.”

Elections are all about compromise. LMOA! 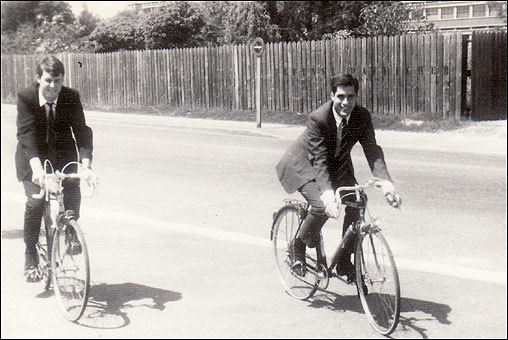 Hey I use a camelbak on road rides! They hold a lot of water and stuff!