Was the sharrow on Millvale Ave between baum and center supposed to direct cyclists in to a line of parked cars? 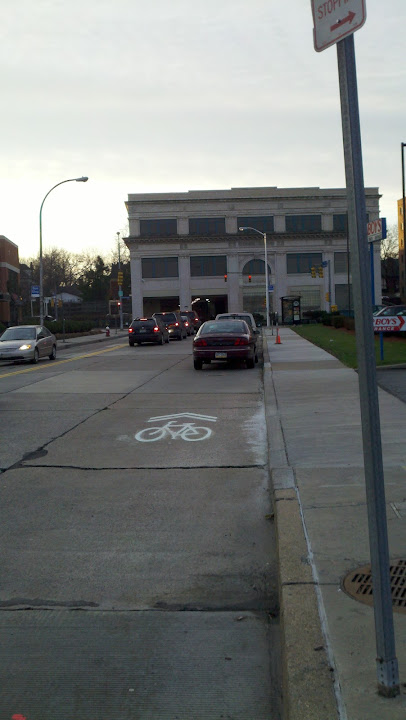 No. Unless they are removing that lane of parking.

Probably just someone making a bid to get the World Observed Trials in the ‘burgh in oh’12. 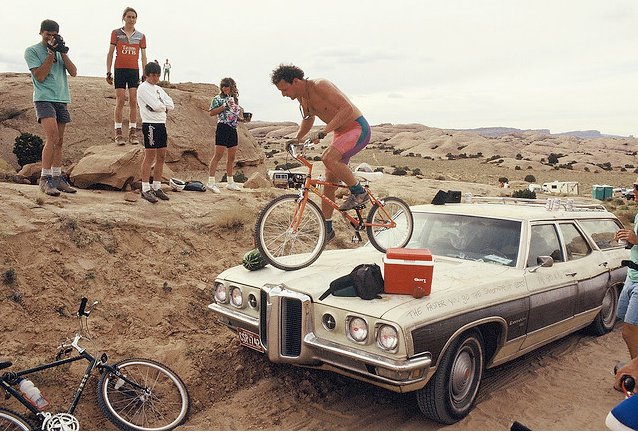 There are so many things wrong with that photo (and I don’t mean the one of the sharrows).

Those parking spaces are to be removed. When you ask? God only knows.

Glad to hear that scott.

Thanks for the photo Benzo! It made me chuckle for a moment at the stupidity of it.

Benzo’s picture also documents something else I’ve been complaining about for years: The old style, two slabs of cement type of paving the city used to do. On streets like this, that longitudinal crack between the slabs is almost exactly where one’s line of travel should be — just far enough out to avoid doors — so the only real thing to do is to take the lane.

Getting rid of parking will help here, but this is just soooo common around the city (Brighton, Perrysville, Second by the jail, etc.).

The only real mistake I’ve seen from the contractors putting in the sharrows so far happened at Friendship and Gross. The sharrows are supposed to be in the middle of the curve, but they put them against the curb on Gross, one heading into the back of parked cars.

Those parking spaces are to be removed. When you ask? God only knows.

I have an angle grinder. Someone lend me their hi-viz vest.

^^^what Stu said. Another example that comes to mind is Fort Duquesne Boulevard. Ugh!

On the note of sharrows, anybody notice some of them appear to be burnt on Ellsworth?

There’s something in a different thread, but the plastic is actually melted on the tarmac. I’m too lazy to find the proper link, though. 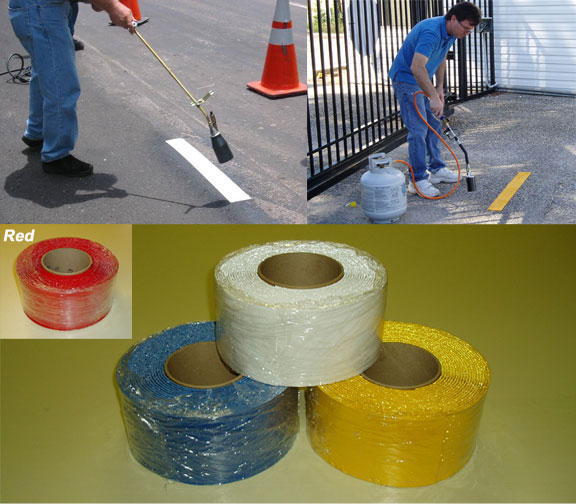 Orange jersey in the back. “Team OTB”? I feel like those could sell well.

Team Off The Back, closely related to Team DFL.

The only thing I see wrong with this picture is that the guy riding is in the midst of a dab. Sweet old Ibis 24/20 trials bike though. Might be a 26/20, made those too. I nearly bought one of those 10 years ago or so, and they were kind of ancient then.

so i guess that was before they completely eliminated the seat? is that a seat post sticking out? youch

What’s with the watermelon? And I don’t know if that ’70 Pontiac is a junker; looks to be in better shape than most ’70 Pontiacs looked in 1978.

There is a white seat on there.

Up until sometime in the 2000’s you were required to have a seat, even in the “modified” class that this bike falls in. Most bikes sported the tiny plastic kids BMX uni seats until Monty went and just put a little felt pad on the top tube and called it a seat. Eventually both stock and mod classes of bikes had some rule changes, with it especially affecting the stock category.

gawd, didn’t even notice the white seat – thought that was the background

Hard to notice the seat when it is that close to those shorts. They are magnificent.

So, I found another sharrow fail at Brighton Rd at Eloise st… it goes right in to the legal parking spaces… Is this the fault of the design or implementation?

Looks like the car is parked illegally… (as per the “no parking pictogram” on the curb right next to it).

According to that sign, the car is parked legally so this is a sharrow fail. Good catch. Please call or write 311 to report it.

Actually, the sharrows are this close to the curb for a couple blocks before Brighton rd turns up the hill. I’ll report to 311.

311 still has no resolution on the first sharrow fail.

Your submission has been assigned ticket number: 26393

Bicycle “Sharrows” are too close to the curb on Brighton Rd beginning at Eloise St and extending till the intersection with California Ave. The sharrows are so close to the curb that legally parked vehicles along this street block the path intended for cyclists. See attached Image.

Your submission has been assigned ticket number: 24383

Bicycle sharrows were installed on S. Millvale ave between baum blvd and center ave. However, parking meters and parking spaces were not removed, legally parked cars are regularly blocking the expected path of cyclists.

The following reply has been made to Ticket ID #24383:

We have notified the appropriate personnel about this issue. The Service Request ID Number associated with this request is 274571.

Thank you for contacting our 311 Response Center!

Gross St. between Friendship and Penn was laid down the same way. I left another ticket w/311.

Do other people feel that the sharrows on Liberty Avenue seem to be perfectly aligned with the pothole zone of crumbling pavement?

This is to acknowledge that the City of Pittsburgh has entered your Service Request.

If you need to contact the city again concerning this issue, please refer to that number.

We will inform you when this request has been completed.

Thank you for allowing the City of Pittsburgh to serve you.

“Bicycle “Sharrows” are too close to the curb on Brighton Rd beginning at Eloise St and extending till the intersection with California Ave. The sharrows are so close to the curb that legally parked vehicles along this street block the path intended for cyclists. “

i noted this also on the north side on brighton when they put them in. i assumed that parking would be removed, as it is supped to be on millvale, but hasn’t been yet.

It’s acceptable that the sharrows are closer to the curb when there is no parking. It’s only a problem when there’s parking.

By the way, I’m also a bit confused on what the expected cyclist behavior is over the Millvale bridge.

Do what makes you feel safe. Pittsburgh has no idea.

There’s some sense in maybe moving to the right when on the bridge. Taking the lane helps you avoid getting hooked, but there are no intersections on the bridge, so that’s not an issue.

But I agree that your safety judgement beats the city’s suggestion.

I just thought it was weird that there would be a sharrow indicating one position and then 25 feet later a bike lane with a different position and switching back 25 feet after the bike lane.

I’m just concerned that it’s not obvious to either cyclists or motorists what to expect here. Mostly though, I’m concerned about the merge back point.

If I am not mistaken it’s supposed to be a bike lane all the way to Baum but Pittsburgh never finished it. Hence the sharrow that directs you into the parked cars.

It is my understanding that we as cyclists have no legal obligation to ride on the separate bike lane when provided (due to issues such as cars or road flotsam in the lane)so I would say if you feel more comfortable not moving over and having to wrassle cars for your lane after the bridge, then do so. That being said, I think it would be courteous to move over if there were cars waiting to pass you.

I hate coming up Liberty when the lights turn flashing yellow.

Before that, with he lights working, the drunkards come in waves. I can wait for them to pass and get through Bloomfield with very little wait and have no cars (not even one) pass me on the street.