Awesome! But can you make the car look more like Pac Man?

And, can you do a mock-up of the fat, bald, ear-bud-wearing jogger on the Highland Park Bridge sidewalk inbound last summer who hollered me off the sidewalk, and told me BIKES BELONG ON THE ROAD!

Make the fat guy look like Pac Man too. He kinda did anyway.

How about this one?

That’s a start – but show the cyclist swinging a u-lock… and can’t we make the car a little more like pac-man?

“Walk bikes on sidewalk” is for the trail detour. I figure they’re aimed only at novice cyclists who can’t handle any possible interaction with traffic. They just omitted the implied “until you take off the training wheels” part.

i guess it is all about assumptions; i assume that sign should say “walk bikes when on sidewalk.” the addition of but a single word would clarify their meaning, and not cause other road users to believe that bikes belong only on the sidewalk.

I’m for making the car look more like a Nissan Armada.

How about the familiar silhouette of a cyclist, but with horns on the helmet. Placard reads: BEWARE OF VIKINGS.

HV, I think you’re right about what they meant. Didn’t occur to me before.

Now I hate that sign too, for its ambiguity.

can the Pac Man pellets be tiny bicycles?

Can the pac man pellets be tiny u-locks? edit: (wo, sorry about the size)

I hate the “same rights” thing because then car drivers use a cyclist not 100% stopping at a stop sign as a good reason to pass them too close. After all, why give a cyclist safe passing distance when they aren’t even obeying the traffic laws themselves? Argh.

You’re going to get some of that anyway. The same-same-same message is pretty easy to get across, though. Diminishing it by creating bicycle-specific rules (like idaho stops) is a bad precedent, imo.

i’d discourage the ‘same rules’ thing, though. bikes SHOULDN’T follow the same rules. we have to follow slightly different rules because our vehicles can’t suddenly accelerate to 45mph!

that’s why I like “GIVE FULL LANE TO CYCLISTS”. Doesn’t muddy the waters with rules or rights or equality. Just give me the lane that I’m already taking. Stay off my butt, don’t buzz me, do what the sign says. Just give me the damn lane.

Granted, in the city, where even CARS don’t get a full lane, this could be tricky.

+1 ewjme. You’re getting lots of those lately.

If we had a safe passing law then we could do something like this: this state needs to be progressive and adopt the Idaho stop law.

“this state needs to be progressive…”

…about a LOT of things…

Ok, I’m a motorist. “Since my car is in the lane, that bike is supposed to be 3 feet off the road”.

Ok, so I’m a motorist (Part 2): “Can I rivet the cyclist’s neck myself? And is that the only place I can rivet them?”

i’m not a motorist, but that is a tiny car, and a very wee cyclist! he must be no more than a foot and a half high on his bike!

ok, so that’s a bad example

Let’s not forget about our tractor brethren in Farm Country: 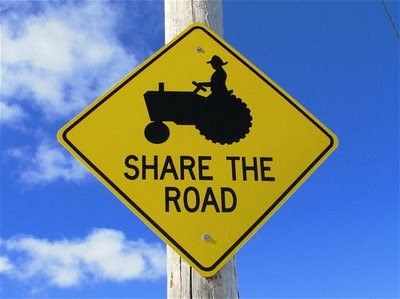 wtf – is that horse flipping cars the bird?

Those are some edgy Amish.

this may take a few tries only 2 tries this time HV for the win

If we made a viking ride T-shirt it would need to have HV’s sign on the back.

You can say that again!

A friend of mine posted this on my Facebook wall.

I’d shell out for a shirt with a viking on it.

Rsprake, that pic is hilarious, though I do feel sorry for the puppy.