So about that Snow…

Ha ha…those drivers on Fallowfield made international news. One of my former colleagues in the Netherlands sent me this one: http://nos.nl/video/212591-glijpartij-in-pittsburgh.html

HAha! Does that seriously translate to “Sliding Party in Pittsburgh”?

nice night for a ride, aside from my glasses fogging up… 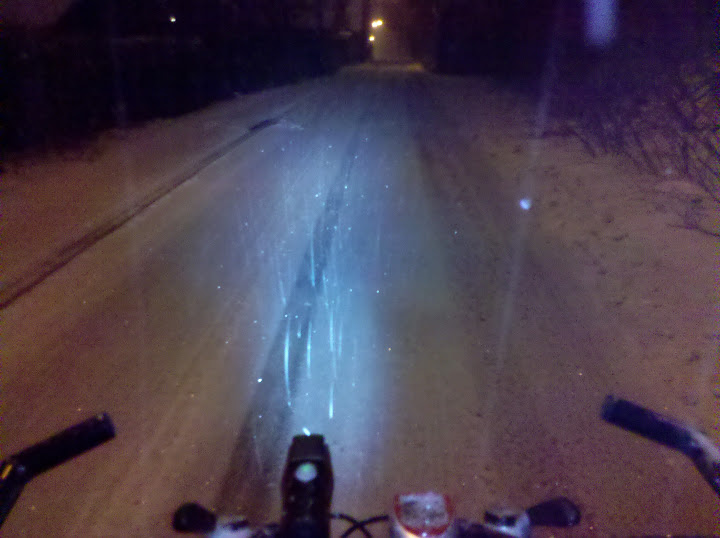 my friend in NYC sent me that beechview video. sigh.

I got friendly “way to go” honks this morning from at least 3 cars. At least thats what I am interpreting it as. Was a mostly uneventful ride in and most of the drivers passing me we going out of their way to be cautious.

oh, it was ice that caused accidents, I thought maybe it was people driving thier vehicles, not really paying attention,

About the plows and salt in Pittsburgh. People have ridiculous expectations about snow removal. I grew up in Erie, the side streets have snow on them all winter until it melts. They plow, but a layer of snow is permanent. Here, if the snow and slush isn’t completely gone during a snow storm the city isn’t doing it’s job.

oh, it was ice that caused accidents, I thought maybe it was people driving thier vehicles, not really paying attention,

i’ve been saying this about so-called “black ice” for a bit now. it bugs me that people have this free excuse for not maintaining control of their vehicle. what is this stuff, anyway? invisible? unlike other ice which is bright and shiny? if the ground is wet and it’s below freezing, there may be ice on the ground, and just because you can’t see it doesn’t give you a free pass to slide all over it and break stuff.

anyway, black ice is a sham, and that rant felt nice.

Black ice means something else in Minnesota. It is when the road is so cold (below zero, F) that car exhaust freezes on contact with it, creating a nice, smooth layer of “black ice” at intersections where cars are sitting idle a lot. This is the language TV weatherman and everyone else uses. Nobody ever calls water freezing on the road “black ice” in the upper midwest, it is just ice, duh.

@dwillen, are you still glad you put on the studded tires?

almost fell when turning from penn onto 9th today when I hit a manhole cover. luckily, I caught myself, and at least I learned to take it slower around corners, heh.

also the thin snow layer on side streets is actually much more pleasant to drive on than the salted but not plowed slush crap that sits on the streets here. try riding your bike in the slushy shit and then move over to the clean snow out of the main driving lane. you’ll see what i mean.

people in this city need to learn how to put snow tires on their cars in winter and drive in a manner that doesn’t resemble a rectum.

@Pseudacris yes.. though I haven’t been on my bike much this week, work kicking my butt.

@dwillen, I know the feeling, though I commuted in yesterday and just stayed the night at work, because it was late and I didn’t feel like venturing back outside, just to come back within the next 12 hours…

Today was a really good day. I was worried when I saw that it was below 10 degrees when I left the house (at 4am, no less…). I just wore my usual sweatpants/jeans, one pair of socks, falling-apart shoes, long sleeve/tshirt/thin hoodie/heavy hoodie with my cheap gloves.

I couldn’t find my winter hat, so I loosened the chin strap on my helmet and wore both of my hood up underneath, and wrapped a scarf around my face. I don’t doubt for a second that I looked absurd, haha.

The way home was unusually calm, so that was nice. I think most people didn’t want to leave their house because it was so cold. I decided to take sassafras (at least I think i did. I went through a whole bunch of parking lots before spilling back out onto liberty, heh), and it was pretty nice.

just being outside and walking from my house to car or car into a building doesn’t feel as cold as riding a bike in 15 degree weather. i have not experienced the 0 degree weather just yet, but i may at some point this weekend.

I really wish I had the money to bus to work today. I’m sure I’ve ridden in worse though.

looks like we’ve got some snow again. i’ve never really ridden the trails in the snow, and i’m thinking of heading from cmu to the south side for the dd show at otb. what kind of ride should i expect?

The jail trail and hot metal were fairly clear this morning. Not sure what it will be like tonight. Looking out my office window, there is snow on the road (not sure how much).

@hidden. My best guess would be that you’re fine on the way there, but who knows about the way back. This morning, everything was fine except for the ramps. You could bike over and then take the 75 bus back. That’s one of the routes that’s always supposed to have a rack on it. Goes from S Side Works to Bakery Square via Ellsworth.

I was dressed for the weather when I left the house, but the temp dropped a bit while I was working so I scraped together some bus fare only to wait about 45 minutes for a bus with a rack, which then broke down halfway there. But on the bright side, there was a different bus right behind it that I was able to take.

All in all, that was actually pretty funny.

This morning (thursday, 1/27) panther Hollow and Jail trails had a light layer of snow over what may have been a bit slippery, but not problematic. It was interesting last night to ride home on a clear (well, maybe a light layer of slush) trail and find a layer of snow on my driveway. Just a bit farther east (and elevation?) made a difference.

quick question…has anyone been out yet? It doesn’t look all that bad, but I’m thinking of bussing it. Rather not though, it’s surprisingly warm.

The Wilkinsburg/East Liberty/Shadyside area is just wet. There were a couple of little spots of ice where the surfaces have never been salted. The news must have sufficiently freaked everyone out because the roads are pretty calm and traffic is sparse right now.

When I took the dog out at 6 am I kind of wished I had a helmet on. Walking. But I’m a way out of town, and that was a while ago, so that may not be indicative for you.

I had the experience of driving to the mechanic and busing back home. I’d seen the salt truck go down my street and up Perrymont, so I knew they were OK. Drove there no problem. The surprise was in walking back down Perrymont in the driving lane and finding my footing very squirrely. So, even where it’s been salted and seems to be OK to drive on, no it isn’t, really.

Not to jinx the situation, but what happened to the giant ice storm we were promised?

I’m glad I rode in today despite the forecast, sheesh.

Rode to work, and it was fun, and a really nice day! I bussed it home though, I’m a wimp when it comes to rain+cold.

Was out and about at 7 AM today (in my truck, sorry), when the weather was particularly nasty- wind swirling, pretty steady snow, deepening cold, and road conditions nearly-completely f*&%ed.

Heading up Forbes from South Braddock, some hearty viking was chugging up the hill, and I thought: “badass!”

I must have seen three of four others within the next 30 minutes.

Here’s to you guys/gals. Rule 9 applies, with extra credit!

Today was the first ride in where I thought, “Wow, my eyeballs are actually cold.” The rest of me was ok though. Heading out back into it soon for the ride home.

Sorry about this snow guys. I took my studded tires off yesterday and gave my bike a thorough cleaning for the first time since I bought it.

Apparently biking around in a t-shirt last week did strange things with my head. Thinking of bussing it home just so I don’t mess up my nice clean drivetrain.

I had a mid-afternoon lunch at Ross Park Mall, and was amazed to see a cyclist climbing the main road up into the mall at about 4:30. The snow was getting pretty serious by that point. He had to be really BA to begin with, climbing that hill, snow or not.

I saw four or five commuters this morning along north shore drive. Most had no fenders.

felt like the last bits of freezing rain were cutting my face on the way home. anyway, the reward for being out today was definitely coming home and changing into sweats and a hoodie